Why the box office failure of Fun Size is actually good news. 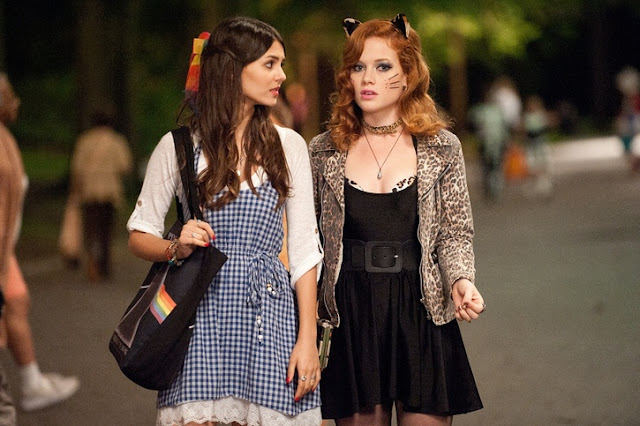 Call it reason 3,214 why movies aren't dead.  As you all know, the Nickelodeon comedy Fun Size debuted in theaters last weekend with nary a peep. With just $4 million to its name by Sunday night, it was the 64th-lowest opening weekend for a wide release in history.  Why does any of this matter?  Well, precisely because it doesn't matter.  The film starred Victoria Justice, Jane Levy, and Chelsea Handler and was sold as "The Hangover for kids".  It was also yet another example of a female-centric comedy.  It bombed.  But you know what didn't happen?  You didn't hear hand-wringing about how a female-centric comedy tanked at the box office. You didn't see speculative essays about what the film's failure meant for the future of female-driven comedy in mainstream cinema.  Heck, I did not see one single article discussing even the fact that the film was in fact a female-centric comedy.  I've always said progress comes when you don't have to talk about it.  Well Fun Size bombed last weekend and nobody really cared.  I'd argue that is progress.


We've reached a point, or we're almost there, where we have enough female-centric projects in the marketplace that every single one doesn't have to carry the mantle of its gender on its shoulders.  Maybe Bridesmaids and its blockbuster success really did change things.  Maybe studio executives have finally realized, buoyed by the success of films like Bridesmaids, Mama Mia!, The Twilight Saga: New Moon, and The Hunger Games, that female-centric doesn't equal box office death.  They have realized that when these films do well, it's not always because women and only women flocked to see them (although that sometimes is the case).  And more importantly, when they fail, as they did with What's Your Number (which is not a good movie but offers a potent criticism of women slut-shaming other women) or Fun Size, it's not indicative of anything other than a single film failing to find its audience based on any number of factors (marketing, lack of actual star power, an appealing premise, etc.).  In the case of Fun Size (which for the record I have not seen), the film was hamstrung by its PG-13 rating which kept out younger kids while still seeming too juvenile for older kids used to sneaking into R-rated comedies.

But no one is reacting this weekend by proclaiming that women can't do comedy.  It's a small victory perhaps.  The mainstream film industry is still overwhelmingly male-centric and arguably will be for quite some time.  But I would argue that we have reached a token benchmark, where female-centric movies are no longer so rare that they are forced to represent the box office aspirations of an entire gender.  It is indeed noteworthy when a film like female-centric film like Fun Size can bomb so horribly at the box office without causing any hand-wringing or apparent repercussions.  Whether because we have enough female-centric product in the marketplace or merely because enough female-centric films have hit it big over the last couple years, we no longer seem to be in a film industry where every single female-led genre picture is used as a box office test for the very idea of female leads in studio pictures outside the rom-com genre.  Yes it would have been better for all involved if Fun Size had been a hit.  But the fact that it flopped and no one cared is arguably just as important.

Jane Levy is so, so good on Suburgatory, I absolutely love her, so I wish that Fun Size had done better, just so more people could become fans of her. I went to the matinee on Saturday, and it was me, three of my friends (a girl and two guys), and a middle-aged man. Not exactly the crowd I was expecting the weekend before Hallowe'en, for a matinee, for a PG movie (it was only rated PG where I am). One thing that I will say about the film is (because this article focuses so much on gender) how close the film actually came to failing the Bechdel Test, in my opinion. Even with three female main characters, almost all of the conversation revolved around the hot boy; the dead father; the little brother; and the mom's young boyfriend. It was surprising when I thought about it later. As for the actual movie, it had a few laughs, and actually made myself and one of my friends cry. It was cute enough that I enjoyed it, and I'm happy I saw it, so that's a good sign.