Review: Final Destination 5 (3D) - The series is still a cheap burger, but this entree is seasoned just right. 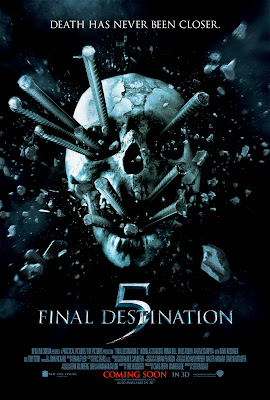 Look, the Final Destination series is arguably the Mad-Libs of modern day studio filmmaking.  More-so than any other franchise in recent history, the ongoing 'Death Strikes Soon!' saga is basically a fill-in-the-blank template with few real deviations from the formula.  If you haven't liked any of the sequels, you won't like this one either.  It is too much to hope for that the series will return to the genuine quality that started it back in 2000.  The first Final Destination was a real movie.  It was a moving, somber, and character-driven horror fable that dealt in real terms with grief, loss, predestination, and the often arbitrary nature of death itself.  The sequels that followed have been, to varying degrees, gore cartoons whereby a bunch of pretty people survive an over-to-top tragedy and then get picked off one by one in various Rube-Goldberg-esque fashions.  The last film didn't even bother to try to be a real movie, and it failed to even deliver on the the blood-splattering 'money shots' that would have justified its existence.  This new entry is a marked improvement and it may even be the best sequel in the series (give or take your admiration for Final Destination 2).  It is indeed the same old meal you've been eating for eleven years, with mostly the same ingredients.  But it's prepared better this time around, with just enough new spices and marinade to make it tastier.

The plot?  You're kidding right?  Okay, um... two dozen employees embark on a bus trip heading for a company retreat.  One of them gets a premonition that the bridge is about to collapse, so he ditches the bus and several of his friends and/or coworkers follow him.  Nothing happens and he is fired for screwing up the retreat.  I kid... the bridge does indeed collapse, killing 80-something people in the usual spectacular fashion.  And, as we all expect, the survivors eventually realize that Death had a plan for them and Death plans to collect on his respective lost souls.  We know this because Tony Todd tells us so and because I imagine anyone walking into Final Destination 5 has seen at least one or two of the previous entries.  Anyway, so it goes: pretty people narrowly escape death, then pretty people die off one-by-one in the usual grotesque fashion.  It's the same old recipe, but it's cooked with a bit more care this time around.

For one thing, there is a token attempt at character development, or at least character differentiation this time around.  The film is nearly 15 minutes longer than the previous entry, and it allows for just a bit of plot and/or narrative. You may not care about the lead couple deciding whether or not to break up after one of them gets a prestigious cooking apprenticeship in Paris and you may not give a crap about one African American employee's struggle with racist co-workers, but the effort is slightly appreciated.  I did appreciate that the characters this time around are adults, which means they have adult responsibilities and occupations.  While I still missed the key concept of Final Destination 2, that the survivors were all strangers who came from varying walks of life, this one is as step in that right direction.  I still wish the series would return to the potency of the first film, the only one where you actually were rooting for the characters to live, but that die was cast back in 2000 when test-screening audiences demanded a jokey finale for the initial installment instead of the intended downer ending.

What this segment does get right is what most of the audience paid to see - the death scenes.  The initial bridge collapse is suitably epic and gruesome, and it is a nice return to form after the somewhat contained initial disasters of the last two sequels.  One could argue that using a real-life catastrophe for this kind of film is in bad taste, but this kind of film isn't intended for those who might be offended by such things.  The stand-alone death scenes that follow are among the best in the series history.  There is one sequence, involving a gymnasium and a stray screw, that is a pitch-perfect example of the old 'bomb under the table' shtick.  It is so skillfully shot and edited that, yes, it earns comparisons to Hitchcock (and the 'punchline' is a corker).  There are several genuinely inventive death scenes that truly exploit the Rube Goldberg ideology that has fueled the series from the beginning.  The film actually has a subtext of its own, as director Steven Quale takes unending delight in pointing out the myriad of various dangers that exist in everyday life (the kitchen of an upscale restaurant becomes a giant room of would-be boobie traps).

The suspenseful foreplay and 'money shots' are all delivered in genuinely high-quality 3D.  Quale has been a longtime special effects technician and eventually second-unit director for James Cameron and it's clear he knows what he's doing with that much-abused third-dimension.  This is the rare live-action movie that not only is worth seeing in 3D but SHOULD be seen in 3D (the opening credits are pretty spectacular).  But in the end it is still a Final Destination sequel.  The plot is the same as it always is, and the characters are pretty thin.  There are some nice touches here and there.  The hot burnette with glasses (Jacqueline MacInnes Wood) is treated as still being hot despite (or in my opinion because) said glasses (the lesson of her story is: "Keep the glasses - be hotter, live longer!").  And the would-be token black guy (Arlen Escarpeta) cleverly avoids that most-hoary of horror film cliches.  And speaking of clever, the ending, which I won't even hint at, is a wonderful treat that should delight longtime fans and genuinely shock newbies.

Final Destination 5 is a genuine improvement after two poor sequels.  It is the same cheap meal you've been eating since 2000, but the recipe is just-plain tastier than most of what's come before.  If you're not a fan of the series, this is certainly no time to jump in.  But if you're a fan of the first and/or second entries, this 'honors' this most formulaic of franchises by making sure that the formula is in service of a genuinely fun bit of trash.  That may be a backhanded compliment, but so it goes.  Final Destination 5 is a darn-good Final Destination film, for whatever that's worth.