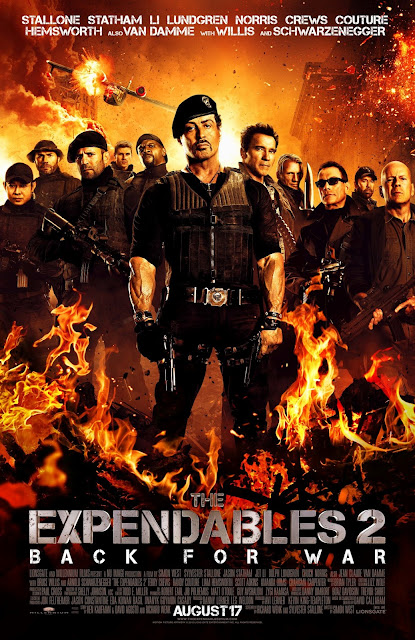 The good news is that The Expendables 2 is that it gives you more of what you wanted the first time around.  There is a greater volume of action and the film has even more A-list action stars offering their services this time around.  The picture is rarely dull and often amusing, but at what cost?  The film barely tries to pretend that it exists as an actual motion picture, with the various onscreen tough guys openly referencing their iconic roles or real-life biographies in a manner that takes you out of the movie each time.  The first picture may have been light on the A-level firepower, but it attempted to be a real film with an actual story and token attempts at depth.  The original Expendables (barely) worked as a metaphor for a modern America that could still do the right thing for the right reasons in a manner honoring its alleged superior morality.  This new film has 'more of what you came to see' but is paper thin without a hint of substance or even dramatic credibility.  Comparing the two films is a classic example of 'trying and (perhaps) failing' versus 'failing to try'.


The initial Expendables was not quite the 80s/90s Action Star Blowout that was promised, but rather a Sylvester Stallone/Jason Statham vehicle that featured several comparative lightweights of varying action-god status.  Dolph Lundgren and Jet Li are legitimate action stars, but Randy Couture and Terry Crews were merely actors who have appeared in an action picture or two who happened to say "yes".  This time around, armed with the first film's $274 million worldwide box office (off a $80 million budget), Stallone was able to rally the troops.  The two dream 'gets', Arnold Schwarzenegger and Bruce Willis get larger and 'in the action' parts to play this time around while Chuck Norris shows up in an extended cameo.  Like the first picture, the film is basically a vehicle for Sylvester Stallone with newbie Nan Yu stepping in for Statham as the theoretical second lead this time around.  Once the film gets past the 'but... she's a *woman*!' stuff, she fits right in with the gang. Oddly enough, Jet Li appears in the prologue just long enough to remind you that he can still kick butt only to arbitrarily disappear from the rest of the picture.  Since much of the film still involves Stallone and his motley crew, Li is sorely missed.

The biggest acting pleasure actually comes from Jean-Claude Va Damme, playing the main heavy this time around.  Van Damme actually gives the best performance of the whole cast, showing that he's used his decade-or-so in direct-to-DVD action fare to bone up his acting skills.  Van Damme is quite entertaining here as he clearly relishes the chance to play a vicious super-villain.  I'd argue that he's at least as due for a big-screen comeback as the quite-terrible 'I forgot how to act' Arnold Schwarzenegger.  Arnold's brief cameo in the first film was its low-light and he's equally as self-aware this time around in a comparatively larger role, to the film's overall detriment.  Willis also delivers hardcore smirk instead of giving a real performance, which is odd as he's easily the best actor of the bunch and the one with the most accomplished big-screen career.  History will judge Mr. Willis as a fine actor who occasionally dabbled in action films rather than a pure action star. Statham also tries to give a real performance, but he's nowhere near as compelling here as he's been in the likes of Safe or The Bank Job and shines only in a major second act action sequence.  Liam Hemsworth shows up as a new youthful recruit who gets to tell a 'meaningful story', but it only makes you (shockingly) realize how much pathos Mickey Rourke offered the last time around (he's completely MIA here).  Point being, with the arguable exception of Van Damme, no one will put this on their highlight reel.

I focus on the performers because they are the main attraction.  The plot is negligible (notice how I skipped the synopsis) and there is little subtext to be discussed.  The core problem is that several members of the cast aren't playing characters so much as playing themselves in a 'wink-wink' manner that deflates any potential drama.  Come what may, the original film at least pretended to be playing for keeps.   Simon West (who made the great Con Air and the awful Tomb Raider) directs the carnage relatively well although he seems unable to stop his cast from giving into some of their worst and campiest impulses. The opening action set-piece basically blows the majority of the budget, and its an unquestionably impressive montage of utter carnage, even if its so lacking context that you could easily imagine that our heroes are actually villains paid to lay waste to well-meaning soldiers of whatever country they happen to be blowing up.  The rest of the film can't measure up to the opening reel, although the climax delivers the body count, mixing god-awful planning by our heroes (which puts the villains smack-dab in the middle of a populated area filled with civilians) and some atrocious editing (which seemingly shows our heroes slaughtering innocent bystanders as well as faceless enemy soldiers).  What action the elder statesmen do partake in is notable only for how little action it really is.  Sorry Arnold, standing in one place and shooting machine guns off-screen isn't 'action'.  With strictly CGI blood and various moments of poorly re-dubbed would-be profanities, it's clear that this film was shot and edited with a PG-13 in mind, just like the last time.

As entertaining and (usually) fun as the destruction-filled male bonding is, one only wonders what could have been (or what may someday be) if someone took this cast and tried to make a truly great action drama.  If you could take the attempted substance of the first film and combine it with the over-the-top action excess of this sequel, along with a director who could actually direct these actors (cough-Andrew Davis-cough), you could make this franchise into something special, something where the best part of the film isn't merely that it exists at all.  But for the moment, the franchise exists as a place for some of the 'classic' action stars of the 1980s and 1990s to get together and blow stuff up while the oldest among them try their hardest to pretend they can still run and jump like the old days (there is quite a bit of um... stationary action in this film).  One could argue that a film starring the defining action titans of their day should produce something approaching the biggest/best action epic around, but The Expendables 2 is not that film.  It is a step down from the original in terms of relative quality while a step up in terms of sheer entertainment value.

i actually really liked this one, thought it was fun and fulfilled its promise. of course the plot is whatever, but van damme??? wow, that was excellent,