Oh my, another film explicitly targeting an under-served niche did exceptional business almost exclusively with that niche.  In a sane industry that would be called smart business, but the studios tend to treat it as a *shock* and write it off as a fluke.  It was no shock to anyone paying attention during the week, especially when the film was announced to be expanding on over 1,000 screens this weekend.  With the weak slate of new releases and little holdover interest, the market was primed for a solid debut for something preaching to a very devoted choir.  First as foremost, 2016: Obama's America earned about 1/4 as much this weekend as Michael Moore's Fahrenheit 9/11 did over its opening weekend on about as many screens eight years ago.  As not-president John Kerry can attest, even the most obscenely successful political documentary of all time ($23 million opening weekend, $119 million domestic total) didn't help John Kerry defeat George W. Bush in the 2004 election (even if we can dispute the results in Ohio, Bush won the popular vote by three million).  So no, the fact that a directly-targeted group of anti-Obama moviegoers gave 2016: Obama's America $6.2 million doesn't mean anything more than the piss-poor box office of last year's The Undefeated (essay) in terms of predicting an upcoming presidential election.

But putting aside electoral consequences, this is a terrific number for a political documentary.  With $9.2 million total (it's been playing in uber-limited release since July), it's already the biggest Conservative-skewing political documentary of all time (passing the $7 million gross of Ben Stein's Expelled) and the sixth-biggest poli-doc period.  It may-well pass the $14 million gross of Michael Moore's Capitalism: A Love Story but surpassing $21 million (Bowling For Columbine) or the $24 million mark (Sicko, An Inconvenient Truth) is unlikely but still possible (it had a halfway decent 2.66x weekend multiplier) if it can sell itself as the defining bit of political propaganda somewhat as much as Moore's film did in 2004.  For now, it doesn't mean much politically but exists as another successful example of targeting theoretically 'unconventional' moviegoers.  Maybe the larger studios will stop writing this stuff off as 'flukes' and start treating it as a savvy business model for certain releases.  Also, let this be a lesson in how box office rank is an immaterial statistic.  Early rumblings that the film would be the top new release (and then certain pundits who shall not be named here displaying a somewhat misleading headline implying it was the number one film early on Friday) has led some on the left to now proclaim that it wasn't a big hit after all because it came in at eighth place.  The number is the number, and it's pretty terrific no matter where it ranks on the charts.  In the meantime, if you want to know what's actually in this film, Slate had a nice piece on it last week, to be found HERE.  And for a review so 'fair and balanced' that he's being attacked on both sides, check out Joe Leydon's Variety write-up HERE. 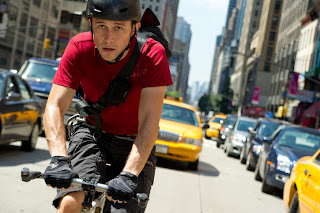 The three new releases all pretty much tanked this weekend, with all three feeling like studio dumps.  The tragedy of the group is Sony's Premium Rush.  The Joseph Gordon Levitt-starring bike messenger thriller was given minimal advertising and was hidden from critics until the last possible moment.  Irony of ironies, it turns out that the movie is pretty good and most of the critics gave the picture positive marks.  This is a classic example of not hiding your film from critics if it's actually pretty good.  As such, a potentially break-out $30 million thriller goes down in flames with a mere $6.3 million debut.  Not much else to say other than to hope it finds an audience on DVD.  Hit & Run, Dax Shepard's second directorial feature, opened on Wednesday and has made just $5.8 million ($4.675 million over the Fri-Sun portion).  The action comedy which co-starred Kristen Bell and Bradley Cooper was a low-profile project from a smaller distributor.  It also cost just $2 million to produce, meaning that Open Road deserves credit for releasing a mainstream vehicle that could have died in the art house (essay) as opposed to 'flopping' by earning nearly three-times its budget in the first five days.  Depending on marketing/distribution costs, this one could well be profitable.

The last new release is an example of correctly hiding your film from critics if its a turd.  Warner Bros' The Apparition was screened for critics Thursday night at 7:30pm and the few critics who attended tore the film to ribbons (it's at 0/31 on Rotten Tomatoes).  As such its $2.95 million opening weekend is a giant tax write-off.  And that's it for this weekend's tragic crop of new releases as summer grinds to a halt.The top film of the weekend was actually The Expendables 2 (review), with a $13.5 million in its second frame.  The film dropped 52%, or what the first film dropped by two summers ago.  With $53 million in ten-days (compared to $63 million two summers ago, re smaller opening weekend and smaller weekdays), it's playing closer to The A-Team, meaning it will likely end its domestic run with around $75-$80 million.  ParaNorman dropped 38% in weekend two, earning $29 million in ten days.  In other words, it's not a leggier phenom like Coraline. The Bourne Legacy (review) has $85 million, dropping 45% in weekend three.  The film will make it to $100 million, but will likely fall short of the first film's $121 million.   The Dark Knight Rises (review) has $422 million, meaning it will surpass Pirates of the Caribbean: Dead Man's Chest ($423 million) in a couple days to enter the top-ten domestic grossers list.  Worldwide, it's at $910 million and hoping for $1 billion.

Pixar's Brave (review) has crossed $400 million worldwide, the 11th-such Pixar film to do so, bringing its global cume to $422 million.  The Odd Life of Timothy Green now has $29 million, The Campaign (review) has $62 million.  It's starting to dip below Anchorman which had $71 million at this point, although once it gets past $66 million it surpasses The Manchurian Candidate as the highest-grossing political-campaign while becoming the biggest political satire in history. Hope Springs has $44 million, meaning it will pass $50 million but not much more than that.  Total Recall is stuck at $55 million and will be pulled from theaters as soon as it crosses $60 million, making the perfectly mediocre remake an abject lesson in being careful what you spend $125 million on.  Cosmopolis expanded to 63 screens but earned $2,434 per, effectively ending its hopes for wider expansion. In better limited release news, Mike Birbiglia's Sleepwalk With Me earned a stunning $65,000 on a single screen in New York City.  Oscilloscope's Samsara (a semi-sequel to Baraka) debuted in two theaters with $73,792.

That's it for this somewhat pathetic weekend.  The big opener next weekend will be John Hillcoat's Lawless, a depression-era thriller starring Tom Hardy, Jessica Chastain, Shia LeBeouf, Guy Pearce, Mia Wasikowska, and Gary Oldman opening on Wednesday (trailer).  Whatever the hell Oogieloves In The BIG Balloon Adventure is, it opens on Wednesday.  Lionsgate hopes The Apparition will mimic The Haunting of Connecticut, but otherwise expect another soft weekend and another after that (with one new release, The Words) until Resident Evil 5 and Finding Nemo 3D open on September 14th.

american rights for hit & run was bought by open road (not known for how much) and was heavy marketed for about 20M. (l.a.times) thus it is a flop.