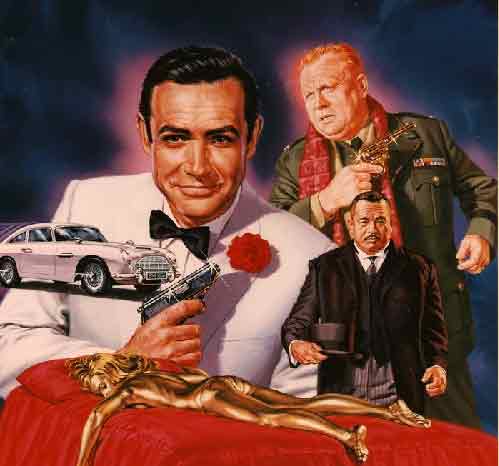 With Skyfall dropping in theaters in just a few months, along with the 50th anniversary of the James Bond series, a close friend and fellow film nerd, Brandon Peters, has generously offered to do a comprehensive review of the entire 007 film franchise. Today is the third entry, of course dissecting the series's true breakout entry of the series, Goldfinger. I hope you enjoy what will be the start of a pretty massive feature leading up the November 9th release of Skyfall. I'll do my best to leave my two-cents out of it, give or take a few items I have up my sleeve (including a guest review from my wife as she sings the praises of her favorite 007 film, you won't believe what it is). But just because I'm stepping aside doesn't mean you should, as I can only hope for robust discussions in the comments section. Without further ado...


That’s as bad as listening to the Beatles without earmuffs!

“The pinnacle 007 film.” “The ultimate Bond adventure.” You’ll hear many a James Bond enthusiast declare Goldfinger as the best of all the 007 films. The film certainly lives up to most of its reputation, but it certainly isn’t without its demerits. It’s without a question, the biggest and largest scale adventure of the three we’ve covered so far. But is it the best? Does it hold up? How will it fair once this retrospective has finished?
SPECTRE sits this film out. Goldfinger finds our superspy 007 investigating bullion dealer Auric Goldfinger (Gert Frobe). While trying to figure out how Goldfinger is smuggling gold internationally, Bond overhears of an “Operation Grand Slam”. Most merely believe that “Operation Grand Slam” is an improbable plot to rob Fort Knox. Grand Slam really involves detonating an atomic device inside Fort Knox rendering its gold useless for 58 years, raising the value of Goldfinger’s stock and giving the Chinese a leg up from the resulting economic chaos.

The third film in the 007 series is the one that locks down the formula. Goldfinger would be a blueprint for a majority of the films to follow. We get an opening action sequence after the gun barrel that barely connects to the main storyline of the film. More than one locale is visited. 007’s famous “cool car”, the gadget rigged-Aston Martin is introduced. Bond gets his first visit to the Q Branch of MI:6 for a rundown of his gear for the mission. We get the now standard introduction of a Bond girl with a (this time overtly) suggestive name. Goldfinger has a distinctly cartoonish henchman (Oddjob) that 007 must get through to get to him. A memorable song number accompanies some much more avant-garde and thematic opening title sequence. It’s all here on display for our enjoyment. This structure and its elements would be copied not only by this series but any number of action franchises that followed in its wake.

Auric Goldfinger does indeed prove a great foil for James Bond. Going head to head in a manner of speaking, much of the most entertaining moments involve verbal duels rather than all-out action. 007 is matched with a man who is the complete opposite of himself. Auric Goldfinger is a man who flaunts his possessions and has a lot to show for himself. Bond lives life by what’s in his briefcase and we’re not even sure he has an apartment. James Bond is a super suave and plays high stakes card games in casinos whereas Goldfinger cheats at Gin Rummy by the hotel pool. Goldfinger dresses like a clown on the golf course and has a lousy game. Bond looks like a catalog model with a slick backswing. Beautiful women are paid to merely be seen with Goldfinger, while they flock to 007. The list goes on and on.

The beginning of the film finds James Bond sneaking in and setting off a bomb in some Latin American facility. His contact mentions that 007 put some group out of business due to the mission’s success. The end of this film finds Bond trying to stop a bomb from going off that would in turn set back or destroy the American gold industry (stopping the bomb at 0:07 mind you). I don’t know if this was intended or planned, but I thought it was pretty cool little book ends.

What’s notable in this installment is that James Bond plays like a villain in this film to Mr. Goldfinger. He is the antagonist, constantly attempting to sabotage Auric's schemes. He is constantly pestering him in even the smallest affairs. Prior to capture, Bond’s confidence sees no threat in him and he is arguably having too much fun. In the famous “Do you expect me to talk?” – “No, Mr. Bond, I expect you to die” scene, Goldfinger has a real shot at off’ing Bond. Bond bluffs using only a token amount of knowledge he happened to overhear and Goldfinger apparently buys in to and keeps him hostage the rest of the film. I can’t help but wonder if maybe Goldfinger wanted Bond alive (after realizing he could provoke genuine fear out of him) so he could see his nemesis, who has all the qualities Goldfinger wants but can’t have, utterly defeated before being rubbed out . But the play between the two is the key feature in this film, and I’m unsure if Bond and a villain ever play out like this again.
One of the challenges that Goldfinger may have wanted to present Bond with in keeping him alive is the sexual conquest of his personal pilot, Pussy Galore (Honor Blackman). It’s never outright said but Miss Galore is clearly a lesbian. She is immune to Bond’s “charm”. At this point in the series, she represents the one woman Bond couldn’t possibly win over. Or could he? In a very disturbing moment set in a barn, Bond completely overpowers and forces Pussy Galore into sleeping with him (a literal ‘roll in the hay’). This scene is scored, and staged as a charming seduction. In the modern era, it is not a very comfortable scene to watch. Here is our hero, the guy we’re rooting for, pretty much raping a woman. I really don’t care that she’s a villain or that James Bond is known for getting around, this scene still plays as ‘rape’. This is one of those bits that you don’t even notice as a kid, but sticks out like a sore thumb when you’re (hopefully) old enough to know better.
Pretty much every Bond TV special or retrospective I watched as when I was young would show and celebrate this scene. Today, the sequence is a major strike against the picture. Pussy Galore is pretty clear about her orientation. But are we to believe that one night on her majesty’s secret penis is all she needed to turn it around? She’s clearly head over heels for 007 after the woo’ing (assault) in Goldfinger’s barn. Galore turns the tables on Goldfinger and changes out the nerve gas that was to kill thousands of troops at Fort Knox. She also informs the CIA of the entire operation. And in the end, she’s stuck with her savior/assailant and happily ever after. This is probably just the ideals of the time coming in to play, but could definitely play out offensive and dated to some of the modern audience not willing to concede to this convention.

The British view of America comes through the eyes of Felix Leiter (Cec Linder). The character returns, but is a much different take. Whereas Jack Lord was a much more “cool” surfer-looking CIA operative, we are given a very Joe Friday-Dragnet approach to Felix. He’s not very loose, is much older, and he feels more of a team player with Bond this time around. They also make it a point to show him just hanging out eating at a Kentucky Fried Chicken. Jack Lord brought a little more character to the role as Linder’s is more plot specific.
While this was the biggest Bond film and featured the classic Bond formula at its most archetypical, all that glitters was not golden. Of the three films so far, this is the weakest performance of James Bond himself, Sean Connery. He was much more committed, exciting, and compelling in the previous two films. His performance comes off like Sean Connery “playing James Bond”, rather than watching James Bond. Maybe it was the change in director. Maybe it was Connery’s money dispute. Maybe it was the injury he sustained while filming. Having watched them in a line within a week, I picked up on it.

Goldfinger sets the tone for what would lie ahead for the series. Is it truly the best? We’re going to find out on this journey. I’m not going to argue with anyone that calls Goldfinger their favorite entry (I’ll have a rundown of my personal tastes regarding the series at the conclusion of this retrospective). It’s a fine adventure. In terms of box office and impact on popular culture, Goldfinger was huge. It spawned countless knock offs and several parodies as well throughout the remainder of the 1960s. I don’t think it’s any stretch of me saying that the Bond franchise was definitely the Friday the 13th and Saw of its time. The 60s were bloated with Bond sequels and spy movies. A lot of that came because of Goldfinger’s success.

This entry is dedicated to the Masterson family as they lost 2 daughters at the hands of one man (Oddjob) in the course of 30 minutes of this film’s plot.

Brandon Peters will return in THUNDERBALL!


NOTE - For a second opinion, read Scott Mendelson's November, 2008 piece on why he feels Goldfinger is grossly overrated: "A passive, borderline useless hero"

completely agree with your thoughts on Goldfinger, especially in regards to Pussy Galore. it really mars the movie. I understand the argument of "that was the time" but I don't buy that that was ever acceptable outside of some terrible sexist/homophobic stereotype. I also prefer FRWL and Dr No