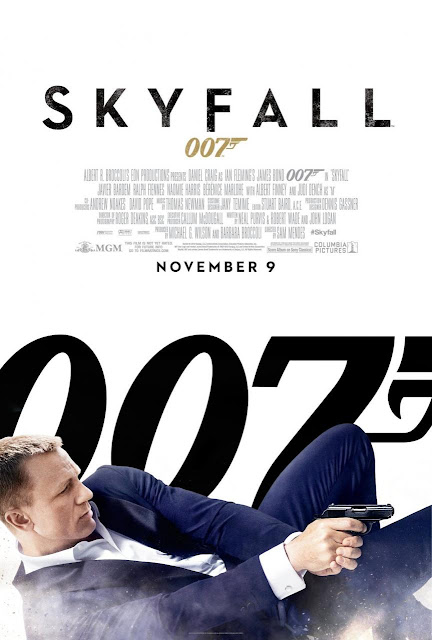 Taken on its own, Skyfall is an exciting and relentlessly entertaining action thriller.  It is strongly acted by a game cast, has sharp dialogue, a stunning visual palette, and several engaging action sequences.  But taken as the twenty-third entry in a long-running franchise, one must acknowledge that it is less an original take on the iconic hero than a mix-and-match from several past films.  But what prevents the film from attaining greatness is the unsure tone and what feels like periodic pandering to the fans.  Seemingly stung by the (grossly unfair) reception to Quantum of Solace, Sam Mendes and company feel pressured to include certain franchise elements that periodically clash with the Bond film they clearly want to make.  More troublesome is the film's theme, which takes a offhand few moments in GoldenEye ("Is Bond still relevant in the modern era?") and attempts to fashion an hamfisted entire narrative out of it, complete with enough on-the-nose monologuing to make Chris Nolan blush.  What hampers the unquestionably engaging and ambitious film is the sense that we're drudging along recycled territory.

A token amount of plot, with slight spoilers: Following a thrilling action sequence where Bond pursues a murderous thief in an escalating chase that climaxes with 007 presumed dead, MI6 faces intense scrutiny which leaves M (Judi Dench) on the verge of forced retirement.  But what was alleged to be an act of old-school espionage becomes something much more personal when MI6 and M herself are specifically targeted in a lethal campaign of terror. A sensational act of violence brings Bond out of hiding and he sets out to discover who is targeting his employer.  But is an aging and perhaps past-his-prime 007 truly capable of saving the proverbial day, or has James Bond become a relic of the past?  As you can see, bits and pieces of several prior Bond films are tossed into the salad bowl, specifically a number of Brosnan entries.  We get bits of The World Is Not Enough (an expanded role for M where her chickens again come home to roost, a seriously injured 007 struggling to do his duty), Die Another Day (the idea of Bond being presumed to be damaged goods following a mission failure), and especially GoldenEye (again, the entire thrust of the plot is basically old-school human intelligence versus cyber-spying with countless comments about Bond's age and his and M's antiquated ways).

GoldenEye rears its head again when we finally meet the villain of the piece, yet another disaffected MI6 agent who is out for revenge. Through the evil Raoul Silva, we get the same self-pitying monologues about how the rules are all changed and how things used to be that we got from Sean Bean.  Javier Bardem as Silva is a hoot, easily the closest thing to a campy villain since Jonathan Pryce's gonzo turn in Tomorrow Never Dies.  Through him and the new Q (a very amusing Ben Whishaw who shares a wry chemistry with Craig) we also get the whole 'computers are special!' bits from Brosnan's debut adventure.  I didn't even mind the handful of 'Hey, the James Bond series is 50 years old this year!' references, as most of them are organic and earn honest chuckles (the appearance of the Aston Martin leads to a wonderful dialogue exchange).  But in terms of the story it chooses to tell and the themes it chooses to play with, it comes dangerously close to what irked about The Amazing Spider-Man in that it doesn't seem to realize or care that it's repeating itself.

What Mendes and company aren't taking from previous Bond films they seem to be cribbing from other popular genre films, which is not surprising if you've been reading Brandon Peters's retrospective reviews. There has been much talk about how Mendes was inspired in some vague fashion by Chris Nolan's The Dark Knight, and it's a more explicit comparison than you'd expect.  There is a large second act chunk of the film, the best sustained portion of the film no less, that feels overtly cribbed from the middle portion of that comic book classic.  For better or worse (mostly for better), much of Silva's philosophical ranting and his big scheme feel like an attempt to give this series a Joker-esque villain.  The film feels gloriously *big* in a way that recalls the The Dark Knight (and arguably Mission: Impossible: Ghost Protocol), and both films have relatively gratuitous nighttime skyscraper-set action sequences set in Asia that exist primarily to show off dazzling imagery.  That's not entirely a criticism, the Shanghai sequence is absolutely beautiful from beginning-to-end.  If Quantum of Solace was Bond-as Jason Bourne/Jason Statham (the shakey-cam fight scenes, the political relevance and/or grey morality), then Skyfall is an attempt to borrow some toys popularized (if not quite invented, natch) by the Chris Nolan blockbusters.  I was not lucky enough to see this film in IMAX, but paying moviegoers should absolutely opt for it if available.

This is arguably the biggest-scale Bond film in recent memory even if its scope is relatively small in comparison to the Brosnan-era action spectaculars (Silva's grand scheme is almost rudimentary to the point of pettiness).  The finale of the film feels like a major action sequence from a somewhat recent spy film stretched out into nearly an entire act.  After the rather short Quantum of Solace, we now have a 143 minute 007 film that could have easily been pruned by maybe 15-20 minutes during its first and third acts (the action climax ends up a bit redundant).  What makes the film work despite its somewhat grave digging nature is well, everything else aside from story and themes.  The film is superbly acted and everyone shares a fine chemistry with each other.  Judi Dench once again provides a strong anchor as she has for the last seven 007 pictures.  She elevates Craig just as she elevated Pierce Brosnan in his four adventures.  I was thankful for the moment, after Silva has lashed out at his former boss, when M simply turns to Bond and bluntly states exactly what happened to Silva without any fuss or drawn-out melodrama.  Naomie Harris is arguably the closest thing to a 'Bond girl' in this picture, and she and Craig have a bantering relationship while the film thankfully never feels the need to call out her field agent expertise.  Bérénice Marlohe basically plays the same role that Talisa Soto played in License to Kill, although she does get to act during her somewhat limited screen time   Ralph Fiennes plays one of the *nicest* characters he's played this side of Maid In Manhatten as a bureaucrat with a heart of, if not gold, then at least a strong metal.

Craig himself is fine, although it must be acknowledged that the somewhat larger-than-life action sequences, especially the prologue, don't quite fit him as well as the brutal fisticuffs and chases that peppered Casino Royale and Quantum of Solace.  As mentioned above, the film constantly acts as a proverbial defense of not just the James Bond franchise but of the somewhat cartoonish thrills that are often associated with the Roger Moore era (we get gratuitous sexual interludes, somewhat awkward uses of the 007 theme music, and complaints about the lack of over-the-top gadgets). Without going into details, the film ends up being an affirmation of the franchise's conventional status quo and it will be interesting to see if Daniel Craig can truly feel at home in a theoretical future 007 film closer to The Spy Who Loved Me than The Living Daylights.  But for the moment, Craig gets some interesting shades to play, playing a James Bond who is every bit of Craig's 44 years of age.  The action sequences are indeed pretty impressive, even if they get progressively less over-the-top as the film goes on.  I'm partial to the opening chase, the above-mentioned Shanghai fight scene (even if the sequence shows Bond to be utterly careless about innocent lives being lost on his watch) and the aforementioned 'Dark Knight sequence' (you'll know what I mean when you see the film).  As you'll notice I've spent much of this review discussing the film in the context of the 007 series as a whole, but for those who merely want a kick-ass action film that also happens to play in the James Bond sandbox, you're in for a bloody good time.

Skyfall doesn't quite reach the heights its so-obviously straining for, losing ground by borrowing too much from prior Bond films and by making the subtext of the film into blatant text.  But as a big-scale action-adventure film it delivers in spades.  Superbly acted, stunningly shot by Roger Deakins, and classically edited by old-school pro Stuart Baird (lots of long and fluid takes during the action), Sam Mendes has crafted a fine action-adventure and a rather good James Bond film.  That it doesn't quite qualify as 'the best Bond ever' or what-not is merely a qualification rather than a criticism.  It keeps the franchise going strong and reestablishes it as a vital and prominent action spectacle in the tentpole landscape.  Regardless of my concerns about where the series might go from here, 007 is on a roll (one bad film, Die Another Day over the last 25 years) and Commander Bond has certainly earned the benefit of the doubt going forward.

Posted by Scott Mendelson at 3:00 PM

"yet another disaffected MI6 agent who is out for revenge"

You mean the grand total of... One, that we've had so far?

Sure, yes. He was the 'grand total of one' that I spoke of besides Silva. I'm just saying that saying 'yet another' when it comes to Silva's status as ex-MI6, like evil MI6 agents are constantly used in the series? Kind-of misleading.