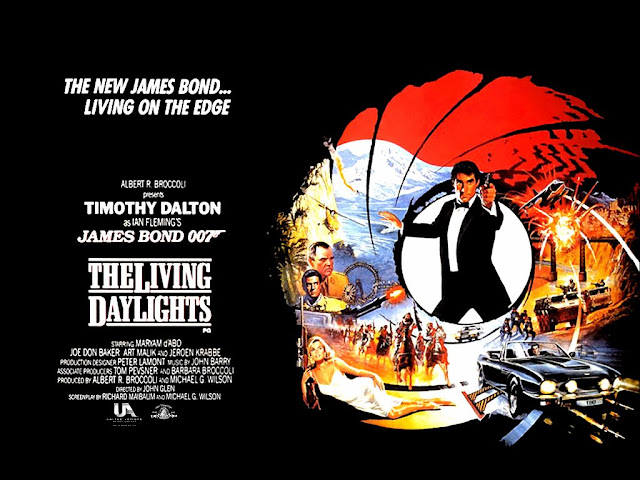 With Skyfall dropping in theaters in just a couple months, along with the 50th anniversary of the James Bond series, a close friend and fellow film nerd, Brandon Peters, has generously offered to do a comprehensive review of the entire 007 film franchise. Today is the fifteenth entry, with a full review of  Timothy Dalton's criminally underrated debut, and my introduction to the James Bond series, The Living Daylights. I hope you enjoy what is a pretty massive feature leading up the November 9th release of Skyfall. I'll do my best to leave my two-cents out of it, give or take a few items I have up my sleeve (including a possible guest review from my wife as she sings the praises of her favorite 007 film, you won't believe what it is). But just because I'm stepping aside doesn't mean you should. Without further ado...

Something we’re making for the Americans.  It’s called a ‘Ghetto Blaster’!
~Q

STATS
Kills: 3 + unknown amount in a bridge explosion
Bond Girls:  Kara Milovy
Car:  Aston Martin V8 Vantage (Series 2)
Locales:  Czechoslovakia, Austria, Vienna, Tangier, Afghanistan
Odd Villain Trait:  We get the Red Grant archetype in Necros, but this guy wears headphones which he strangles people
Song:  “The Living Daylights” performed by A-ha (Yes, they did have another song)
Other Notable Song: “If There Was A Man” performed by Chrissie Hyde (of The Pretenders)

James Bond reloads and fires on all cylinders for the debut of Timothy Dalton as 007 in The Living Daylights (TLD).  John Glen gets a chance to introduce a new 007 to the film going audience and does it with much success.  TLD finally is able to bring back and emulate the sense of mystery, adventure and espionage found in From Russia With Love that the franchise had tried and failed many times.  Soveit General Georgi Koskov fakes his defection and recapture to the British Government.  Koskov has in reality, teamed with arms dealer Brad Whitaker.  Koskov is also purchasing opium from Afghanistan renegades and hoping to profit and make money back to purchase arms as well.  Bond is led onto the case by the would-be assassin of Koskov, Kara Milovy, a successful cello player.

Whether you believe Moore retired or was let go isn’t important.  His time was up, as was obvious from his previous 2 outings.  The search was on for a new Bond.  You’ll see names popping up all over the place like Mel Gibson or Christopher Lambert being up for the role.  They may have been discussed in preproduction, but none were ever a serious contender.  Three men were up for 007 this time around.  Sam Neil (Hollywood’s worst travel agent) was a favorite of everyone involved except top dog Albert Broccoli.  Star of the unofficially cancelled television show Remington Steele, Pierce Bronsan was given the under the table offer from Broccoli to play James Bond in TLD.  Word got out that Brosnan (whom many though during the series run would make an excellent James Bond) was to get the role and Remington Steele’s ratings saw a big uptick.  Brosnan’s contract for the show had a 60 day period in which he was obligated to return to the set if the network changed its mind on the cancellation.  On the final day of the contract, NBC optioned it and renewed Remington Steele for another season.  Broccoli rescinded his offer to Brosnan, citing he did not want his James Bond to be simultaneously the face of a television franchise as well.  When it was announced that Brosnan would not be 007, the ratings dropped for Remington Steele, the 5th season lasted five episodes before it was canceled, and also my mother was upset.

Enter Timothy Dalton.  Dalton was originally offered the role of James Bond for On Her Majesty’s Secret Service.  Dalton turned down the role, saying he was far too young to play it at the time.  When it was assumed that Roger Moore would not return in For Your Eyes Only, Dalton was once again brought in as a possible replacement.  There was a bit of back and forth between Dalton and Broccoli before it was all set.  Timothy Dalton was put in to play with a script that was originally intended for Roger Moore.  Unlike Moore in his first films, Timothy Dalton is able to overcome this obstacle and make it his own.  Dalton brings a true sense of grit and realism to his role as James Bond.  You get the true sense that this guy has sacrificed his life to the service.  Its not painted as a glamorous world for him.  He’s quite gruff, a little cold, but this actually how James Bond was on the pages of Ian Fleming’s novels.  Dalton also did as much of the stunt work as he was allowed to as well, making for some more realistic action than we had been treated to in a long time.  To make things more brief, everything thing Daniel Craig is praised for in his portrayal, Timothy Dalton was criticized for.

And unlike his predecessor, Timothy Dalton’s 007 is given an introduction scene in the form of the opening teaser.  It clearly is structured to slowly reveal James Bond.  It begins with an aerial drop and then a truck chase with Bond parachuting out the back window.  It’s a sharp and dazzling intro the new James Bond.  Definitely an action packed, kick ass intro since nobody is going to pull of Connery sitting at the card table.  While the film is rather weak in the villain department, it covers it in many other places.  The action scenes are quite fun, including skiing (FIVE!) down a hill in a cello case.  Bond also gets the coolest car since Goldfinger to play around with.  The film features a lot of practical and real stunt-work that ramps up the intensity of the action and gives some real stakes.

Another strength in the film is that there is only one Bond girl to focus on.  And they really nail it.  Aside from On Her Majesty’s Secret Service, no romance has been this believable.  The actors have some chemistry but the script services well.  There are many scenes where you can just feel them falling for each other and building to them sleeping together.  Not just happening, this love is actually earned for once.  How is the Bond girl?  She’s pretty good, serviceable and works in relation to the plot.  My only qualm is how much involvement she has in the final action sequence, but the movie has been so good at this point, its not a bother. A few things show the sign of the times in the film, like the score having an 80s pop twist.  A big one is something you won’t see in a film today (or who knows how long).  Bond befriends and becomes allies with a group of Afghanistan mercenaries to battle the Soviets.  It didn’t bother me, but a more sensitive view may not understand or like it.  If you’re one of those people, avoid Rambo III like the plague.

This film marks the final appearance of General Gogol.  I’ve not mentioned him since Spy Who Loved Me, but he’s been in every film since.  His presence has been there for jokes and villainy in each film.  But he’s as notable a presence as a Blofeld, even if he’s nowhere near a bad guy or threatening.  The character of Pushkin was originally Gogol, but due to the actor’s health complications, he was made into a cameo at the end of the film.  The Living Daylights provides one of the very best James Bond adventures featuring the extremely underrated Timothy Dalton in the role.

Maybe I’m biased, because as Scott and I recently discussed, he was my Bond growing up.  I remember my mom saying that “he’s just doing this one, and they’ll have Pierce Brosnan in the next one”.  I wonder if any other people were thinking that as well.  Maybe that’s how Dalton had a bad rap for so many years, because people were blinded by their desire to see Pierce in the role and they weren’t getting it?  Too bad, Dalton was great and this debut blasts off.  This was the first film released from what I can recall from memory and it holds up quite well.  It’s a terrific adventure and does the series proud.  I highly recommend this film if you’ve been avoiding it, never seen it or haven’t watched it in a while.