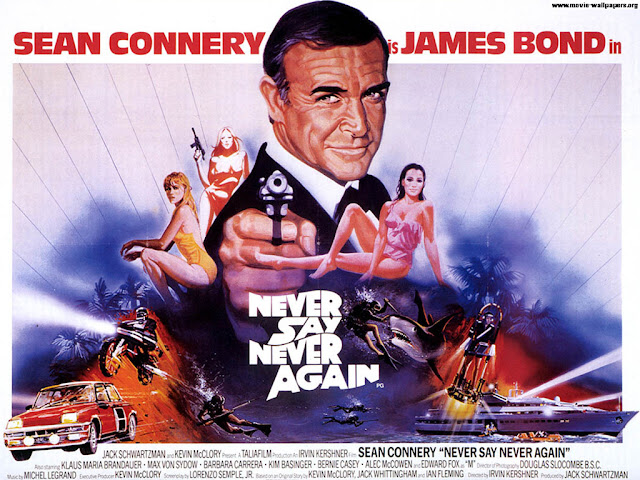 With Skyfall dropping in theaters in just a couple months, along with the 50th anniversary of the James Bond series, a close friend and fellow film nerd, Brandon Peters, has generously offered to do a comprehensive review of the entire 007 film franchise. Today is the thirteenth entry, with a full review of that unofficial Bond adventure, Never Say Never Again.   I hope you enjoy what is a pretty massive feature leading up the November 9th release of Skyfall. I'll do my best to leave my two-cents out of it, give or take a few items I have up my sleeve (including a possible guest review from my wife as she sings the praises of her favorite 007 film, you won't believe what it is). But just because I'm stepping aside doesn't mean you should. Without further ado...

Never Say Never Again is a non canon James Bond film.  Hollywood usually has two very similar films released in a year, whether they be similar premises (Dante’s Peak and Volcano in 1997) or the exact same subject matter (Capote and Infamous in 2006).  But having an additional film apart from a series while said series is going on?  And in the same year?  Featuring the same lead from earlier in the series?  How did this happen?  We never had two Kirks in different movies.  Never two different Freddy movies.  But, two James Bonds did happen.

Prior to Dr. No jump starting the Eon series of James Bond films, author Ian Fleming was around town trying to get 007 into tv shows and movies.  His first instance of success was having Casino Royale adapted for an episode of television on the show Climax! In 1954.  It starred Barry Nelson as Jimmy Bond and Peter Lorre as Le Chiffre.  After that, there were was a failed preproduction of a series and some scripts to be worked on.  One of those script was called Longitude 78 West.  It was a completely original James Bond tale written by Ian Fleming, producer Kevin McClory and scriptwriter Jack Whittingham.  The project ended up being abandoned.  So, wanting to keep the story alive, Fleming wrote his next 007 novel based on that script.  Only Fleming did not credit McClory or Whittingham for anything on his novel, Thunderball.

When Harry Saltzman and Cubby Broccoli secured rights to the series and began to actually make a Bond film, McClory and Whittingham struck.  The lawsuit would last from 1961 until 1963.  Through the resolve McClory gained a lot of cinematic possession for the book, Thunderball.  He had a failed attempt to bring it to the screen, but Broccoli and Saltzman seemed to figure it would only be a matter of time before he succeeded.  In a deal to bring Thunderball to the screen, McClory was given the role of the sole producer on the film.  In return, he would not be allowed to make another film based off the book for 10-12 years (sources vary).  Thus, the bullet of a competing Bond film had been dodged for the time being.

When the time had arrived in the early-mid 70s, McClory wasted no time getting back on track.  In addition to getting a screenwriter on the project, he also convinced Sean Connery to come on board to assist in creating the film.  The title was James Bond of the Secret Service.  When Broccoli and Saltzman got word, they took McClory back to the courtroom as they felt the title was too close to On Her Majesty’s Secret Service, which they owned full rights too.  This time in court separated who exactly owned what.  While McClory was forced to change the title of the film, he retained rights to the events in Thunderball and any characters, organizations or places unique to the book/film.  That meant McClory had the rights to heavy hitting villain organization SPECTRE and Bond’s arch nemesis Ernst Stavro Blofeld (while the film world was introduced to him in From Russia With Love, he first appeared in the novel for Thunderball).  This forced the script to The Spy Who Loved Me to drop SPECTRE from the script and change Blofeld to Stromberg.

McClory regrouped and got things going on his film, although it wouldn’t be until the early 80s that it went into production.  Connery came back on and this time it was decided that he would reprise his role as James Bond.  The script was changed to feature an aging, past his prime Bond.  The director of The Empire Strikes Back, Irvin Kirschner was hired to direct.  They were going to challenge the Eon Bond film that year, Octopussy to battle at the box office.  The film itself is pretty hated among the 007 fanbase.  Looking around the internet, if people even count it, it’s always hovering around dead last.  Some, like yours truly, don’t even count it.  It’s missing a lot of the familiar tropes that people love about the 007 series.  Things like the gun barrel sequence (its been said one was actually filmed, as well as a pre-credit sequence, but they were cut), a credits sequence and familiar supporting actors to name a few.

Plus, it’s just a modernized version of Thunderball.  When I was collecting all the 007 films on VHS in the 90s, my parents once surprised me by getting me this one.  I don't want to sound like an ungrateful brat, but I wasn't happy.  I was pretty disappointed and I let them know it.  I said it wasn't a real James Bond movie.  I don’t know how long it even took to put that one in the VCR.  That’s how much this film is loathed.  I haven’t watched Never Say Never Again probably since the mid-90s.  I just always avoided it.  Upon watching it for this retrospective, it’s honestly not that bad.  It’s a completely unnecessary film and drags quite a bit, but it’s never horrible.  It’s competently directed and well acted.  It almost plays as a James Bond film for adults.  The film strips away a lot of the camp and fixes a lot of the plot holes/problems from the original film.  The tone is very mature and very realistic.  The sex scenes are bit more revealing and suggestive (they don’t cut away when the first kiss happens).  The action is good enough and features a forgettable, but very entertaining, motorcycle chase.

Most of the characters from Thunderball are retained.  Connery gives a much much better performance here than his Eon sendoff, probably because he wants to be here.  Max Von Sydow is probably the best Blofeld we’ve had (although, my favorite Blofeld is when all we hear is a voice and all we see is a hand petting a cat).  The take on Largo is different, but I like mine with a patch on his eye.  Kim Basinger plays Domino in one of her very first film roles.  While I’ll fall for her six years later as Vicki Vale, she’s no Claudine Auger with a dubbed voice.  The same goes for Barbara Carrera.  I much preferred Fiona Volpe to Fatima Blush.  We do get probably the best Felix Leiter since Jack Lord in Dr. No via Bernie Casey.  Connery had the idea that maybe Felix would be more interesting if played by a black actor since there were many forgettable attempts in past films.

Like I said, the film is nowhere near as bad as the rap it gets.  It’s decent.  I much prefer Thunderball to Never Say Never Again.  Thunderball is much more colorful and fun while still maintaining a sense of menace.  Most of the same characters and events in Never Say Never Again come across less likeable and engaging.  The score in Never Say Never Again is horrible too.  The title song is beyond bad and the score sounds like a lazy, sleazy exploitation film from the early 1970s.  It’s easily top 3 in terms of worst scores of films featuring James Bond.  Nothing in the final sequence holds a candle to underwater spectacle and boat fight at the end of Thunderball.  In the battle Bond films in 1983, Never Say Never Again and miles better than Octopussy in quality.

In terms of box office, who did the film going audience have a bigger desire to see?  Roger Moore or Sean Connery?  Many predicted due to Connery returning after 12 years and the fact that Moore was on his sixth Bond film in a row that Connery would win out.  They were wrong.  Connery had the opening weekend numbers by about 1 million, but Roger Moore convincingly defeated him in the final numbers.  The tally – $187 million worldwide to $160 million.  Octopussy also had a smaller budget.  So, there you have it, Roger Moore was better than Sean Connery when it came head-to-head at the box office.

McClory was not finished with his Thunderball obsession.  He attempted to remake it once again in the 90s.  The screenplay was called Warhead 2000 AD and he claimed Timothy Dalton was to return to the role for it (apparently Liam Neeson was on standby in case Dalton wouldn’t do it).  This project never came to fruition.  Through a series of events the Thunderball rights landed in the hands of Sony who was planning to make their own Bond films (also having rights to Casino Royale).  MGM (rightholders to Eon’s series) started some litigation which resulted in an out of court settlement with Sony relinquishing all claims to James Bond (editors note - part of this deal allowed Sony to take MGM's portion of the rights to Spider-Man, which allowed that franchise to go full steam ahead).  McClory still felt he could make another Bond film, but in 2001 the courts rejected his suit that he could.  Needless to say, for the foreseeable future, we will not see another remake of Thunderball.

And that kids, is why you should take two seconds and type two peoples' names on a story you’re writing when they’ve clearly helped you at some point.

Kevin McClory will not return