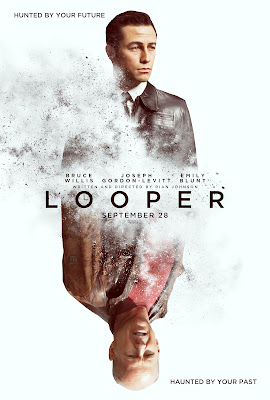 Rian Johnson's Looper is less an out-and-out original work as a hodgepodge made up from bits and pieces from other iconic science fiction stories stirred into a relatively tasty stew.  It has an admirable courage, both in content and structure.  It is unafraid to go to some very dark places and it establishes a perfectly clever initial premise but uses it merely as a springboard for a whole different kind of tale.  Its first half is relentlessly entertaining, clever, and unpredictable.  But once Johnson settles into his story of choice, the film becomes somewhat of a waiting game while we merely attempt to guess if Johnson has any more tricks up his sleeve and what they might be if he does.  But make no mistake, Looper is a strongly conceived and character-driven character drama wrapped up in a science-fiction thriller.  It is well-acted and expertly constructed, and I appreciated its eventual intentions.


I went into the picture knowing only as much as the first trailer revealed, so I will do you the same courtesy.  30 years in the future, time travel will be invented but immediately outlawed.  Still, the practice is used by various crime syndicates as a way of disposing of unwanted individuals.  Joe (Joseph Gordon-Levitt) is what's called a 'looper', a man from the present whose job it is to kill people sent from the future.  In a ravaged economy where opportunity is scarce, the financial rewards of being such a hit man allows him and his ilk to live a life of modest luxury.  But what happens when Joe's latest victim turns out to be himself, the Joe of the future (Bruce Willis)?  That's all the plot you need so that's all you get.  Just know that the film is arguably something very different from a conventional time travel thriller.  The film you think you're getting is quite different than the one you end up with, and its first half takes joy in subverting your expectations before settling into its groove.  Johnson is intentionally vague on the logic behind his scenario, and there is an amusing moment where Bruce Willis basically tells the audience to stop worrying about the logistics of time travel.  The first third of the film vividly sets up time and place, establishing a depression-era city where the homeless and desperately poor seemingly outnumber the remotely-well-to-do.

The picture implies that said misery may only exist in this city, but we are never given proof of that nor are we ever told how the city in question went to pot.  But the overwhelming misery on display ends up serving as a giant metaphor for the overall character arc of several major players.  To Johnson's credit, Looper keeps its action to a bare minimum, favoring character development punctuated by bursts of occasionally shocking violence (there is a moment around the halfway mark that may lose a number of general audience members).  Billing issues aside, this is truly Gordon-Levitt's showcase, and he is frankly superb.  The film focuses on just a few characters, and all I will say about third-billed Emily Blunt (who shows up towards the end of the first hour) is that this is relatively new territory for her and I'm happy to report that she has more to do than be the potential love interest.  I will acknowledge that Noah Segan, as an eager-to-please fellow looper on the chase, seems to have a missing subplot.  Lastly, Pierce Gagnon, as Blunt's young son, delivers one of the more interesting child performances I have seen in quite some time.

Where the film goes I will not say, but it deserves credit for actually crafting a tale of substance and weight.  While it plays emotionally close to the vest, Looper eventually becomes a tale of selfishness versus selflessness, nature vs. nurture, even if the moral playground isn't as clear as that might suggest.  It is less a head-spinning science-fiction thrill-ride than a somber and meditative quasi-tragedy.  It is about those with little attempting to live a life of worth and those with no incentive to be decent accidentally stumbling upon (or actively running away from) the chance to be decent. In the end, the time travel mechanics almost qualify as a red herring, as it's clearly the means to an end in terms of telling the specific story that Rian Johnson wants to tell.  The biggest surprise in Looper is not in the form of any eye-popping plot twist or revelation, but merely the fact that it makes an effort to be a real film.  Whether it is better than the various films it somewhat borrows from is beside the point.  It takes bits and pieces of the old and successfully stirs them into something that indeed qualifies as new.  As a piece of brainy and thoughtful popcorn entertainment that aims to deliver substance over style, Looper is an unqualified success.

HUGE Spolier: please do not read if haven't seen movie yet......warning repeated......ok, Scott, huge problem with ending that I just can't shake: if young Joe kills himself, doesn't that negate everything that happened in the movie (I.e. No old Joe, Bruce Willis coming back etc etc)
Movie was great, but this point really takes the air out of the balloon. Any thoughts?? Did this occur to you after watching the movie, and if so is there any rationale to explain it? Love to hear your thoughts