Review: The Paperboy (2012) is a messy and disjointed, but superbly acted piece of southern film noir. 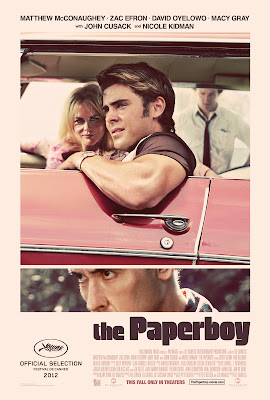 Lee Daniels's The Paperboy is a movie that frankly skirts by purely on the good will of its actors.  The story is pretty much a wash, even if its mundane nature wins points for probable realism.  The narrative is mostly drained of pulse-quickening melodrama, but with little of substance to take its place.  And the third act simply lounges about before halfheartedly building to a seemingly arbitrary conclusion.  Despite all of these demerits, the picture is mostly entertaining, and pretty much full credit should go to its cast.  Nearly every major cast-member is somewhat playing against type, and the film qualifies in the end as a modest acting treat.  It's not a good film and it barely qualifies as a good movie, but as a showcase of some surprisingly nuanced acting, it merits a viewing and a token recommendation.


The story, written by director Lee Daniels and based on a novel by Peter Dexter, technically concerns the efforts of crusading big-city reporter Ward Jansen (Matthew McConaughey, seemingly having not aged a day since A Time To Kill back in 1996) to overturn the murder conviction of Hillary Van Wetter (John Cusack).  Entering this arena is Ward's partner Yardley Acheman (David Oyelowo), Ward's little brother Jack (Zac Efron) and Van Wetter's pen-pal romance Charlotte Bless (Nicole Kidman).  What transpires is less a classic righteous struggle to save an innocent man from prison and more a lurid and unabashedly B-movie piece of southern gothic 'trash'.  There are water cooler moments of both sex and violence, although the film never revels in said moments in a way that disguises the oft-unpleasant nature of what these characters say and do.

The most interesting element of the picture is Van Wetter himself, as the would-be victim of the story is an unrepentant scuzz-ball, with Cusack delivering what is easily one of his most unappealing performances in his long career.  That Ward Jansen and Yardley Acheman still doggedly pursue his freedom could be an example of 'it's the principle', although the story doesn't let anyone off the hook that easily.  There is a grey morality to the entire enterprise and its refreshing seeing the film's African American characters presented as just as flawed as the proverbial white leads.  Oyelowo is a bit more complicated than meets the eye in more ways than one while the Ward family maid (Anita Chester played by Macy Gray) struggles with an environment where half the clan treats her like family and the other half treats her like property.  The fact that the film's racial politics are not front-and-center lends the film an additional dash of realism, as it's nice to encounter a 60s-set drama that acknowledges racism without being explicitly about it.

The film's core problem is the story itself, which basically stumbles about in search of any kind of dramatic urgency or rooting interest.  I cannot speak to the original novel, but Daniels delivers a narrative of such out-and-out sloppiness that we end up with Zac Efron informing us via voice over of rather important plot developments.  But the film's charm lies with its actors, and pretty much all of them deliver in spades.  Kidman and Cusack shine brightest if only by playing so explosively against type.  McConaughy plays closest to home, but he reminds us yet again what an astonishing fireball of charisma he is.  Efron is fine, as he is more the central story teller as opposed to anyone with a real impact on the tale being told (IE - no one watches How I Met Your Mother for Ted).  Macy Gray is quite good here and it further shows that Lee Daniels has a real knack for getting compelling performances from musicians (and yes, stand-up comedians as well).

I frankly cannot recommend The Paperboy as anything other than an acting treat.  It meanders when it should chug forward and lacks any real rooting interest.  Perhaps its dramatic weakness is a causality of its realism (with a dash of southern noir tossed in), but truth is sadly no excuse for poor drama.  It is certainly a giant step backwards after Daniels's superb Precious but one can only hope that it is a temporary bump in the road.  Oh, and it's also absolutely nothing like the video game.