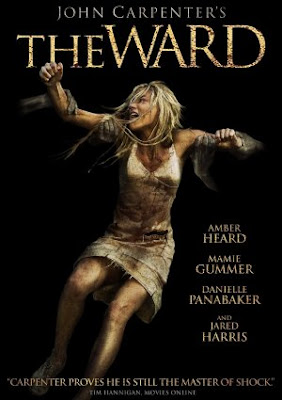 There is nothing particularly wrong with The Ward, there is just little about it to stand out amongst the sea of similar genre entries, to say nothing of the whole slew of direct-to-DVD films that fill the shelves of Blockbuster and the queue of Netflix any given day.  That this film was given a token theatrical release just last month is only because it happens to be helmed by one of the more respected horror filmmakers of the 1970s and 1980s.  But the era of John Carpenter is long over.  While I can tell you that the film looks more polished and more overtly cinematic that it likely would have if directed by someone less esteemed, the picture remains a relative non-entity.  It's not bad so much as it's not very good in any notable way.

A token amount of plot:  Its 1966 and Kristen (Amber Heard) has just been taking to a mental institution for torching a house.  While she is relatively level-headed compared to the more overtly 'eccentric' girls housed there, she is still deemed a threat to herself and others and is locked up for therapy.  While the seemingly aloof Dr. Stringer (Jared Harris) attempts to get this young woman to open up, something sinister and possibly supernatural is stalking the halls of this facility.  One by one the other girls meet tragic fates, while a seemingly uncaring staff looks the other way.  Can Kristen and the dwindling survivors solve the mystery or will the ghostly killer claim all who reside there?

There are some small touches that I appreciated, I will confess.  This is a rare film set in a mental institution where the staff are not overtly abusive and sexually exploitative (there is an almost shocking moment where an orderly, played by D.R. Anderson explicitly turns down a sexual advance from one of the patients).  And while Dr. Stringer doesn't seem all that capable of digging into young Kristen's mind, he does seem to be a caring and genuinely concerned therapist.  I also appreciated the lack of gore, as the film's violence has more in common with Carpenter's earlier works (Halloween, The Fog) than his later bloodbaths (Vampires, Ghosts of Mars).  And while all of the other young women (Lyndsy Fonseca, Laura-Leigh, Mamie Gummer, Danielle Panabaker, and Sali Sayler) are all quite attractive (Fonseca rocks the nerd/bookworm-glasses thing), the film doesn't linger on their sexuality or make it a factor in the plot.  Arguably most importantly, the sure hand of Carpenter does give way to several moments of genuine suspense and tension.  This project may be 'beneath him' in terms of size and scope, but he brings a genuine cinematic feel to what could have been a bargain-basement horror project.

Still, at the end of the day, the movie doesn't have all that much to offer.  Like In the Mouth of Madness, the film's revelations eventually cancel-out any real re-watch factor.  Whether or not that should be held against the film is open to debate (Alejandro Amenábar's The Others is a near-masterpiece on the first viewing, but painfully dull any time after that).  The performances are all pretty solid and the young women are indeed sympathetic enough for you to NOT root for their deaths.  The Ward is a perfectly successful in what it sets out to do, but what it sets out to do isn't much.  You could say that this is a blow to the legacy of John Carpenter, but I'd slightly disagree.  I'd rather see Carpenter end his career making small-but-effective movies like this one.  It's a better way to go out than Wes Craven, who can't even succeed when given all the relatively big-budget tools at his disposal.  The Ward may be slight, but it's a hell of a lot better than any film Wes Craven, Tobe Hopper, or even Brian DePalma has directed in at least five years or so.

The DVD - The picture and sound are fine for a low-budget film.  More importantly, this release inexplicably doesn't contain a single subtitle track.  Yes, there are allegedly English closed-captions, but no actual subtitles.  This is doubly odd considering that Arc Entertainment's other recent release Ironclad (pretty good hack-and-slash medieval battle film, by the way) contains an English subtitle track.  On the plus side, those watching it at a lower volume due to a sleeping infant in the next room can take heart that this is very little dialogue in the film, so perhaps it was a case-by-case call.  Still, the omission is frustrating.  On the extras front, there is only a theatrical trailer and a commentary, which features John Carpenter and Jared Harris.  So in closing, the film is merely okay, and the DVD (or Blu Ray if so inclined) is at-best a rental, as there are few special features and the film has a severely limited replay value.
Posted by Scott Mendelson at 9:48 AM