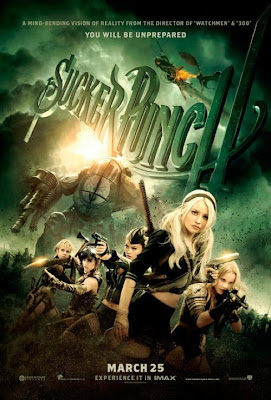 Zach Snyder's Sucker Punch is an experiment and a question: Is is possible to make a female-driven action fantasy without falling prey to certain misogynistic messaging? Just as its difficult to make an anti-war film because war plays out as exciting onscreen, there is a level of titillation that comes from the very idea of watching attractive women taking up arms against various foes. One could argue that the same applies to any number of male action pictures, as I don't think too many heterosexual women or homosexual men minded watching Harrison Ford, Bruce Willis, or Matt Damon kicking butt in their respective action franchises. But rather than duck the subject, Snyder dives right into the muck, offering an examination of the voyeuristic nature of our mainstream action fantasies, and how those films view women. It's a severely flawed picture, and thanks to the MPAA (it took seven tries to get a PG-13), somewhat artistically compromised, but there is much more going on underneath the surface that the surface-level razzle-dazzle. Judging by the critics thus far who apparently can't see past the special effects, it would appear that the tagline 'you will be unprepared' is all-too accurate.

The plot, which isn't entirely coherent, basically involves five young women attempting to escape from an asylum in the late 1960s. The picture centers around the unnamed young woman played by Emily Browning and referred to as Baby Doll by the men around her. Her crime is the accidental shooting death of her younger sister, committed in a botched attempt to prevent both of them from getting raped by their stepfather in the wake of her natural mother's death. Faced with a lobotomy in three days, Baby Doll convinces four other female patients to aid her in a complicated escape plan, which sets into motion the last two acts of the picture.

The rules of the movie don't really lock into place for a good 25 minutes, so temporary confusion is not unexpected. The much-advertised action set pieces are basically fantasies, daydreams used to distract Babydoll while she engages in sexual dances for various authority figures in the asylum, during which her friends steal an item that will eventually allow her escape. While the action scenes are set-up as 'musical numbers', there is clear video game-style storytelling in these moments. Scott Glenn shows up in each sequence to lay out the scenario and offer a few words of advice. But Snyder shoots the action scenes themselves in a clean and surprisingly coherent fashion. Amidst the colorful and loud chaos, there is a real sense of geography and purpose, and the action beats are always easy to follow and appreciate. And there is a healthy mix of larger-than-life heroics and real stunt work and fight choreography.

The shocking part is that, even though we know that the gunplay and explosions are not 'real', we are still emotionally engaged in the outcome because the fantasy world is indeed connected to the real-world in a semi-logical manner (if they are maimed or killed in the fantasy, that means they are being maimed or killed in the real world too). And for those merely watching the action for the sake of action, there are a few absolutely stunning bits of huge-scale adventure played out during the second half of the film. The second big-scale sequence, a huge set piece set to a hard-rock cover of "White Rabbit", is a visual tour-de-force that probably got Zach Snyder the Superman gig all-by itself. Quite frankly, Sucker Punch has some of the best pure action scenes you'll see in any film all year, if not the next several years.

But what's interesting about the film aside from the surface-level big-budget thrills is the icky undertone that pervades the entire picture. Almost right from the start, we have characters openly mocking the overt sexuality of the main character. The rest of the young women (Vanessa Hudgens, Abbie Cornish, Jena Malone, and Jamie Chung) have been sent there for reasons not explained, and Snyder simply lets us presume that it is due to the kind of circumstances that led Baby Doll there (it's no secret how society used mental institutions as weapons against women in the not too distant past). While the film keeps most of the sexual content off-screen or implied, the picture remains a glance at how women cope with being treated first and foremost as a sexual object. At the end of the day, the 'empowering' action scenes are escapes from the cruel sexual exploitation that these girls all-but take for granted. The scenarios in which these action scenes take place, basically that of a rape victim closing her eyes and mentally going to a 'happier place', puts a nasty edge to what could have been a bubble-gum fantasy.

The film, without preaching, seems to be about the matter-of-fact lechery from men towards women that is an accepted norm in our society, both then and now. That we as a society not only casually accept the arbitrary sexual exploitation of young women and can only accept female-driven action heroism when its sexualized for our pleasure and with a tinge of comforting fantasy... well, there's a lot more going on in this picture than a bunch of snappily-dressed young women fighting undead soldiers and robots. The tragic underpinning is how not empowering the film really is, as it presents a rather pessimistic view of young girls trying to overcome or take advantage of the 'male gaze' in order to win their freedom.

In the end, Sucker Punch is a messy, flawed, and ambitious movie that earns kudos for daring to actually be about something relevant and interesting. It is actually very much about the sexualization of women in popular culture, rather than just using those tools to make pointless exploitation fare. I wish the actual characters were a bit more developed and I wish the 'real world' scenes were a bit more engaging. But the action sequences are often astonishing and genuinely engrossing. There is much to admire and discuss in this bitterly sad and angrily feminist mini-epic. You just have to look beyond the surface level and past the razzle-dazzle. To quote that standard-bearer for macho male fantasy, there is more to this film than meets the eye.

Thanks for the review.

Since the first teaser, I have felt that this film would be the poster child of misogynistic storytelling. While I appreciate your uncovering and addressing the underlying message, are you certain that this isn't a shroud to convince us it is not the very thing it supposedly disdains? I always find it interesting that films can claim disdain by showing degraded human conditions in only moderately glamorized light - Tell me how terrible violence is by shocking me with it.

I like your insights into the reason for the fantasy sequences. This makes the MPAA's treatment of Baby Doll's consensual sex scene even more abhorrent.

I take it that since the ratings process for the movie was so insane and since the musical numbers were largely cut from the film, we're going to get an Ultimate Director's Cut released to Blu-Ray and DVD just in time for Comic-Con?

Snyder has already said that a rated R director's cut is hitting Blu-Ray later this year.

It's suppose to add 18 minutes to the film. He wasn't specific about the content that's going to be added.

You really need to clarify that this "young girl" has reached the age of consent.

But it is not explicitly "Glamorized". These young woman are locked up against their will to be used as sex objects after having their spirit/brain removed. It's pretty explicit with the words the characters used and how they act. "Possessions" "Can You Fix This", "Quite a show", no EXPLICIT male gaze-ish moments, no explicit acts of anti feminine violence which the woman doesn't attempt to fight back against. and the last bit of the movie drives it home that A. objectifying a fellow human WILL NOT work for you and B. you will get in trouble one day for doing things such as Blue does.

I'm surprised there is so little discussion about how the men are depicted in Sucker Punch as well. Objectification/depersonalisation is used as a tool in the story, and swings wildly backwards and forwards between sequences. The "real world" and "bordello" story arcs are stories of abused and victimised women, and the bordello sequences put men squarely in sexual dominance over the women as imprisoned sex workers. It's not subtle or deep, and it's not meant to be.

But the depiction flips in the mission sequences. There is one principle male character, who guides the girls with a fatherly, supportive manner, but all the other males are inhuman, or depersonalised, or powerless subjects of the women's casual violence. The first enemies tower over a solitary Baby Doll. Then the girls team up and get strolling through combats killing countless anonymous steam-powered zombies, bomb-stomping fields of ant-orcs, dicing robots - without batting an eyelid or chipping a nail. Two normal human men are encountered, and both are powerless against the women - one is a very young Allied soldier in a catatonic shell-shocked state, the other is a weaponless enemy courier who can only flee. There is an up-close-and-personal killing, which has revolting squicky sexual overtones, but it's not an adult male. And the one really dangerous enemy is female.


I'm still really impressed with the level of visual symbolism used to reduce and dehumanise and objectify men in the mission sequences. The samurai statue with a phallic nose, who bleeds light and dies with an explosion of crows. The steam-powered zombie-soldiers with gasmasks. Swarming hordes of orcs that are treated like ants. Those robots that have exaggeratedly masculine upper body and arm design, but are sexless and 'atrophied' from the waist down. The fact men aren't really enemies, they're mission obstacles to be eliminated. And so on...

The sexual objectification of victimised women sits in opposition to the womens' casual violence against dehumanised men. If it was only about the mission sequences, Sucker Punch would be a boring and dumb attempt at titillation through faux-feminism. And the girls would be smug and 1-dimensional. The asylum and bordello sequences by themselves would be unoriginal and out dated. Put together, it makes a surprisingly interesting look at violence, power and self concept.


Anyhoos, I like it, plotholes and all. The violence is intentionally casual and never dwelt over, but you won't get past it if it's not your cup of tea.