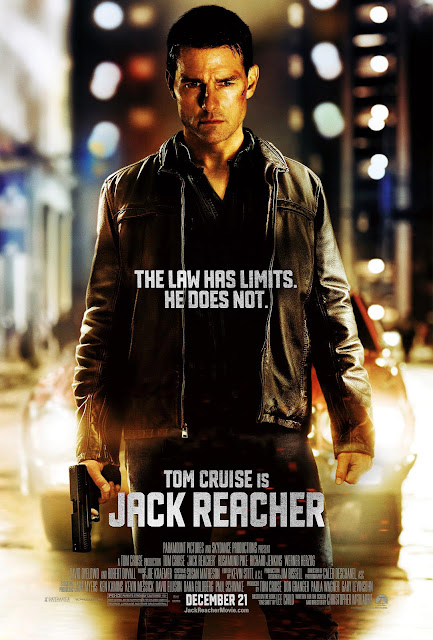 Writer/director Christopher McQuarrie's Jack Reacher (trailer) is such an authentic bygone relic that I'm not entirely sure it takes place in the present day.  The picture looks, sounds, and feels like a relatively high-quality action thriller from the mid-1990's, which is mostly a compliment.  I could be mistaken, but I don't recall a single scene where a character uses the Internet and/or uses their cell phone for anything other than *talking* (the title character even uses a pay phone on several occasions).  But, thank the heavens, this is not some kind of 'let's make a 90's thriller' technical exercise, but it merely inhabits a mostly forgotten sub genre so successfully that it becomes something of a time capsule piece.  For those not interesting in examining it as a kind of relic, it fortunately also operates as a consistently entertaining and intelligent procedural.  It is strongly acted by all, with pulpy dialogue which I presume comes from the Lee Childs book (One Shot) from which it is based.  It has issues of length and tone, but it mostly entertains and is the rare would-be franchise starter for which I'd gladly see a sequel.

The plot concerns a damaged war vet who is accused of sniping five random bystanders.  Upon his capture, he looks at the airtight case against him and simple writes out "Get me Jack Reacher".  Enter Mr. Reacher (Tom Cruise), a former army cop who basically disappeared two years ago and who has reason to believe that the accused is unquestionably guilty.  However, some prodding from the defense attorney (Rosamund Pike) convinces Reacher to dig around, and of course we soon discover that what seemed like a random mass shooting is perhaps something more premeditated.  For the record, if you're among those disinclined to want to view media that reminds them of last week's school shooting, you might want to avoid this one for awhile.

To the film's credit, it takes its violence very seriously and the picture spends much of the first half dwelling on the innocent lives that were lost and their loved ones who where left behind.  If you recall, McQuarrie's Way of the Gun closed its first-act gun battle with an extended take of innocent bystanders killed in the crossfire, and this film shares an equally grim view of its bloodshed (this is another absurd example of a truly R-rated film pruned just *so* for a PG-13).  And, without being overly blunt about it, the film does have a few pointed things to say about America's gun culture and the kind of people we sometimes send to war in our name and then let loose back on our streets.  It's surely not fair to have to discuss a popcorn entertainment like Jack Reacher in regards to a completely unrelated mass murder, but those who are sensitive to such material should take heed.

The bleak undertones only become an issue when they are periodically melded with what is supposed to be a *fun* piece of pulp fiction.  There is an extended sequence involving a grieving father that is immediately followed by the introduction of the main villain in a scene straight out of a James Bond movie (The World Is Not Enough, to be exact).  Said villain, hilariously played by Werner Herzog, is given a token tragic back-story, but his sheer super-villainy doesn't quite gel with the real-world crime drama that is being told.  Herzog is a hoot whenever he's onscreen, but he plays such a comic book-villain-esque character that it somewhat betrays the otherwise grim drama (sadly, the film does not end on a sequel tease for a Terrance Malick attack).

Also it must be mentioned that the last third or so of the film slowly descends into genre autopilot, and the film's character-driven first half is surely superior to the somewhat generic finale.  Even so, being vague here, there is the odd fact that these relatively smart characters take nearly half the film to reach a conclusion that is an answer to the very first question that you or I might have asked after the initial murders.Still, by the time the action mechanics take over, we're already invested in this world and these characters.  Tom Cruise may not be 6'5" and 250lbs, but he makes a convincing Jack Reacher nonetheless.  It is an interest change of pace for Cruise, as his career as an action star has mostly been defined by on-the-fly instincts and relentless movement.  Here he plays a man who walks instead of running, a man of grim intimidation instead of constant forward motion (there is a subtle joke late in the game about Tom Cruise's propensity for running).  Cruise may not cast an intimidating figure (the film thankfully doesn't try to make him out to be all that tall), but his performance sells the idea anyway.

The rest of the case is relatively game, with Rosamund Pike doing what she can with a pretty stock 'token female' character.  Thankfully she isn't a love interest, although she does fulfill certain genre requirements, including one (damsel-in-distress) that again sends the film back to 1990s-land.  David Oyelowo, as the lead cop investigating the initial massacre, dominates the first reel before mostly disappearing.  He's good and intense enough to make you wish someone gave him his own action franchise.  Richard Jenkins is fine until the third act gives him some rather weird scenes to play (that's not a spoiler, trust me) while Robert Duvall shows up late in the film as a crusty gun-range operator.  Alexia Fast is the only other female character, and the film seemingly struggles between giving her a real character to play and merely having her be a dimwitted would-be femme fatale.

The action sequences, relatively sparse until the finale, are shot and edited for a maximum visual and geographical clarity.  And once again it should be noted that the film doesn't remotely glorify the violence or brush off the collateral damage that occurs during the narrative.  Alas, there is a completely unnecessary (if well-constructed) car chase in the second act that is just one prime offender for the film's bloated 130 minute running time.  I can think of a good 20 minutes that could have been removed, including whole scenes (the scene with the grieving father mentioned above, for example, well acted but ultimately irrelevant along with the entire needless epilogue), which would have improved the pacing of what should have been a lean and mean action picture.

Still, warts and all, Jack Reacher is a winner.  Tom Cruise once again proves why he's still a movie star, and McQuarrie again instills what could have been generic movie violence with a grim sense of reality (arguably made grimmer by real life tragedy).  The dialogue is clever and appropriately pulpy and the action is mostly engaging even if it's occasionally gratuitous.  The characters all have chemistry with each other, and I'm a little disappointed that a likely sequel would probably involve a mostly new cast (since Reacher is of course a drifter).  Still, the best thing I can say about Jack Reacher is that I kinda hope we get a sequel.  The world needs intelligent and world-weary real-world action pictures like Jack Reacher.  And the mind reels at which quirky prestige director Tom Cruise can face off against next time.  Terrance Malick?  Martin Scorsese?  Michael Haneke?  Sophia Coppola?  Here's hoping that the series lasts long enough to eventually have a Sinister Six-style team-up, led by the ghost of Orson Welles.

Grade: B
Posted by Scott Mendelson at 8:47 AM

MINOR SPOILER, sort of, but there is a typical genre move bit they do here where Reacher is shown the murder weapon, and then a moment later has his alleged photographic memory tested by the lead cop who asks for the serial number of the gun. Instead, Reacher tells the cop something else, and forty-five minutes later in the movie, to make a point tells the cop that the gun's serial number is 0456981, dazzling the cop. Why is he dazzled? By that point there's no way the cop himself remembers the serial number, so Reacher could throw any number out there and seem brilliant, just as his giving the killer's Army serial number - these could be total bluffs but it works in movieworld. Also, what does Reacher do when he gets the flu? How does he by Nyquil in some states? He thinks everyone would choose his freedom of choice, which is awesome until you actually ride a greyhound from Chicago to Pittsburgh which generally involves more fat people and coolers than moments for heroism. Also, the most gratuitious cleavage shoot in cinematic history. You'll know it when you see it.