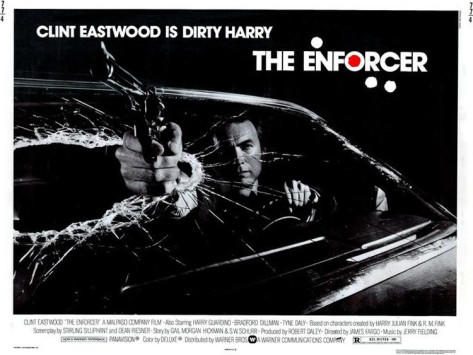 Dirty Harry falls prey to the curse of the third film in a franchise in The Enforcer.  Intended as the final chapter to the series, the film comes off cheap, amateur, outlandish and dated.  The film’s themes and plot’s believably may have sold better in 1976, but even then it had to have seemed a bit cartoonish and laughable.

Two fans of the first 2 films in the series took it upon themselves to write their own Dirty Harry film, Moving Target and by chance got it through to Clint Eastwood himself.  Eastwood thought it needed work, but took it to Warner Bros.  Warner had already begun work on a script for a third picture called Dirty Harry and More.  The villain plot of Moving Target was combined with the female partner angle of More and thus the film with the working title Dirty Harry III (later renamed The Enforcer, as Eastwood wanted each film to have a standalone name) was put into production.

The female cop angle of the story could easily come across in the modern day as a tad insulting to where we stand in today’s society.  However, you must keep in mind that this was a big move for its day and while it may look different in today’s light was a ‘step in the right direction’ for females in certain roles in cinema.  To add, actress Tyne Daly oversaw and had input on rewrites for the character because she wanted it to come off as correct as possible.  The film also scored mostly positive reviews from female critics.  And while some may take offense to Harry’s bigotry toward a woman in the police force, we’ve been with him for three films now, this shouldn’t come as a surprise.  I actually find his bigotry to be kind of amusing at times as I do the same sort of “wow”ing things that Mad Men offers.

Clint Eastwood second unit director (and later the director of Every Which Way But Loose), James Fargo makes his directorial debut on The Enforcer.  Eastwood was originally slated to direct, but due to The Outlaw Josey Wales going over on its production dates, Eastwood could not be involved in preproduction.  James Fargo was brought in as a director who would be a yes man to Eastwood after things went way south with Eastwood and Ted Post on Magnum Force.

It comes as no surprise when I read that Fargo went on to direct a lot of television in the 80s (including The A-Team, Hunter and The Scarecrow and Mrs. King).  The film reeks of this.  The aesthetic is that of a 70s or 80s television show.  From the acting, the actors, the sets, the props to the costuming (I swear one of the People’s Revolutionary Strike Force members and the thug holding the liquor stores up at the beginning had the EXACT same outfit).  The photography and choreography of everything is very pedestrian.  It’s a very lazy looking film.  And when you have a film that is basically 70s/80s a Dirty Harry the television procedural episode and it runs at a little over an hour and a half things get very boring.  I swear I’ve seen these locations they shot at on shows like The Incredible Hulk, Wonder Woman, Knight Rider, etc.  Just incredibly generic.

The villains in this film kidnap the mayor and somehow take over Alcatraz holding him hostage.  This group of five or six never looks, nor feels threatening at all.  It’s almost a joke.  They almost look like they walked off the set of a Friday the 13th sequel.  They’re supposed to be dirty hippies, yet their outfits look freshly pressed and their faces are nicely cleansed and made up.  It’s a pit pathetic.  We’re not given much insight to them other than they are evil.  According to the story of making this film, Eastwood thought the script had far too much character development and was chopping it down in favor of more action.  If this was his goal, he didn’t do it enough.

Another group in this film posing as a possibly threat is obviously based off the Black Panthers.  They are lead by famed blaxploitation icon Fred Williamson, whom we’ve seen in the first two films as different characters (The “Do ya, punk” guy from Dirty Harry and the pimp from Magnum Force).  Unlike when James Bond went to Harlem, these characters don’t feel as rich or in the spirit of things as Live and Let Die.  It’s a little bit cringe worthy.

It's worth mentioning that our one recurring character in this series besides Harry, Frank DiGiorgio, is killed off in this chapter.  Frank was Harry’s replacement partner in the first film and met up with Harry after a stakeout in Magnum Force.  This kind of raise the stakes death may have seemed bigger had the scene not been so comically acted and blocked.  Also notable is that Tyne Daly’s Kate Moore is killed protecting Harry at the film’s climax.  So if you’re keeping track of Harry’s partners…

He’s living up to his reputation when it comes to partners as you can see.

This whole film feels like a giant buildup to an action sequence in Alcatraz.  It doesn’t make sense why the villains go there; it has no purpose in the story.  I feel Eastwood just thought it would be cool to do.  So cool, 3 years later he’d do a full movie called Escape from Alcatraz.

The Enforcer has some strong ideas for its time, buts executed in a rather dull and cheap fashion.  It’s pretty boring throughout and never feels engaging at all.  Dirty Harry delivers some fun lines and learns a little as a character, but there’s really nothing to see here.  It’s just not worth your time unless you’re a completest.

Next up:  SUDDEN IMPACT