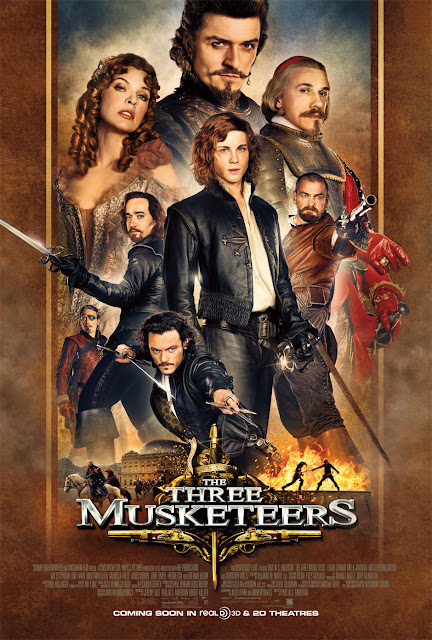 What is most unexpected about this umpteenth version of the Alexander Dumas novel is how generic it feels. Despite the use of 3D (FYI - I watched this film in glorious 2D) and a few bits of Mila Jovovich choreography, this movie could very well have been made in 1993 or 2001, which is when of course the last two stabs at this story were released.  It's the general same plot as always, with a few bits of the comparatively faithful Richard Lester versions from 1973 and 1974 thrown in (the last two didn't spent much time on stolen jewelry), and lacking any real visual reinvention that would make it stand out.  The lack of anything 'new' wouldn't be as much of a problem if the ingredients weren't so half-baked.  But Paul W.S. Anderson's The Three Musketeers is pretty much just another mediocre adaptation.  It's better than The Musketeer (IE - Three Musketeers with a bit of wire-kung fu), but that's not saying much.  At best, it makes one realize how good that oft-maligned Disney adaptation from 1993 really was.  Stephen Herek's all-star version may have been overtly kid-friendly, but it got the basics right.  As always, if you don't like the actual Musketeers, you aren't going to get much out of their adventure.

The plot.... well, it's the same as always.  Young D'Artagnan (Logan Lerman) sets off to fulfill his childhood dream of becoming a Musketeer, only to find that the legendary group has been disbanded.  Fortunately for him, there are treacherous plots afoot, as Milady de Winter (Mila Jovovich) schemes with Cardinal Richelieu (Christoph Waltz, seriously slumming) in a scheme to seriously mess with King Louis XIII and imperil all of France.  So, as always, it's up to three disgraced former Musketeers - Athos (Matthew Macfadyen), Porthos (Ray Stevenson), and Amaris (Luke Evans) to bring the would-be young Musketeer up to speed and save all of France.  But the pieces don't quite click this time around.  Lerman again proves that he is ill-suited to be an action hero, as his D'Artangnan never quite makes the leap from annoyingly cocky to heroically cocky.

The three title characters barely register, and it is here that the film most fails in comparison to its predecessors (come what may, the 1993 version introduced me to the wonderful Oliver Platt). This leaves the villains to provide most of the entertainment.  Jovovich delivers in her one major action sequence, but otherwise exists purely as eye candy.  Waltz is occasionally amusing, but he frankly pales in comparison to Tim Curry's splendidly wicked turn eighteen years ago in the same role (in what was arguably one of Curry's last great theatrical roles).  Mads Mikkelsen's Rochfort exists purely to have someone to duel for the action finale, but he lacks Michael Wincott's gravely menace or Tim Roth's haughty arrogance (Roth didn't play Rochfort, but his 'man in black' served the same purpose back in 2001).  The only villainous turn that registers is Orlando Bloom's Duke of Buckingham.  It's not a great performance, but it's obvious that Bloom is relishing his chance to overact for perhaps the first time in his career, and the fun is contagious.

The action scenes are surprisingly sparse and relatively bland.  The one positive is that Anderson, perhaps 'hobbled' by 3D cameras, shoots the scenes in long, wide, and fluid takes, rendering the relatively unimpressive choreography at least comprehensible and watchable.  If I say that I enjoyed the final sword fight, it is only because I am a sucker for duels to the death atop high structures.  The film feels lifeless and bland, to the point where what should be a wondrous sight (two airships blowing each other to pieces high above the clouds with cannonballs, machine guns, and flamethrowers) is very nearly dull.  It's a great visual idea, but Anderson never does anything remotely clever with it.

In the end, Paul W.S. Anderson's The Three Musketeers isn't so-much wretched so much as it is rendered unnecessary by its lack of imagination and rote casting decisions.  It's not very well acted, with a lack of clever writing and a shocking lack of major action sequences.  Without the ability to get the basics right, and without any real invention brought to this old story, it lacks anything aside from 3D to make it remotely worth.  This new Three Musketeers does little more than make you appreciate Richard Lester and/or Stephen Herek.   In the end, it's all for one, but all for naught.