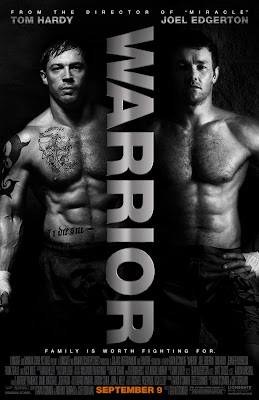 I cannot count how many times I have watched a sports-related drama and thought to myself "How much better would this movie be if the main opponent wasn't a two-dimensional villain?".  Whether adult-aimed Oscar bait (Cinderella Man) or family-friendly faith-based dramas (Soul Surfer), any number of underdog sports movies have dramatically shot themselves in the foot by feeling the need to make the opponent into a vicious, selfish, and occasionally murderous antagonist who 'must be taken down'.  There are exceptions (Akeelah and the Bee, Miracle), but the majority of sports films feel the need to pander to the audiences' baser instincts by not just making the big game about the triumph of our hero, but about the defeat of a genuine villain.  Writer/director Gavin O'Conner (who directed the aforementioned Miracle) finds a neat way out of this contrived set-up, and I'm a little shocked that no one thought of it before.  Instead of focusing on one underdog who must triumph in an athletic event, Warrior focuses on two would-be athletic opponents, giving them both equally valid reasons to want to succeed and refusing to give either of them the moral advantage.  This is just one of a handful of thoughtful choices that O'Conner makes in shaping Warrior into a top-notch entry in its respective genre and an all-around fine character drama.

A token amount of plot: Paddy Conlon (Nick Nolte) was an abusive alcoholic who wrecked the childhoods of his two sons, Brendan (Joel Edgerton) and Tommy (Tom Hardy).  Years later, the son who ran away, Tom, returns to his father's doorstep a shattered shell of a man.  The one thing Paddy did well was train his kids to fight in the Mixed Martial Arts (MMA) arena as younger men.  Tommy wants to get back into the game and enlists Paddy to train him.  Meanwhile, high-school physics teacher Brendan is facing foreclosure.  Unwilling to give up on the home where he lives with his wife (Jennifer Morrison) and two daughters, he reluctantly gets back into the fighting game.  An unwilling family reunion appears in the works when both brothers end up competing in a major MMA tournament that carries a $5 million prize.  Can family wounds be mended outside the ring while age-old scars continue to show themselves during competition?

While the plot of this picture is not that much different than any number of direct-to-DVD 'Tapout' films, the devil is, as always, in the details.  This is simply a wonderfully constructed, well-acted, and intelligently-written drama that happens to take place around the world of the MMA league.  The most surprising thing about the picture is frankly how intelligent it feels in regards to character relationships.  This is most apparent in the dialogue, which feels like the kind of things that human beings would actually say when in a given situation.  Seemingly throwaway characters like Brendan's wife (Jennifer Morrison), the principal at Brendan's school (a wonderful Kevin Dunn) and the gym owner who trains Brendan for the big fight (Frank Grillo) are fully-fleshed out human beings who have moments of honesty, insight, and empathy.  While your sympathy may shift between Tommy and Brendan, there are no villains in this story.  Nick Nolte gives a career-highlight turn as a former scumbag who honestly believes that his sobriety and new-found religion should give him at least another chance at being a father and/or grandfather.

There are character revelations that I will not reveal, only to say that what Tommy is fighting for is every bit as honorable as Brendan's attempts at saving his family from financial ruin.  Tom Hardy's younger brother is a far more withdrawn and volatile character, a man who's most at-home doing combat in the ring.  It goes implied-but-unsaid that Tommy's brutal efficiency as a fighter stems from using his fights as a form of therapy (IE - he's mentally beating the hell out of his father and his brother), which adds a certain 'What will this guy do after the tournament?' subtext.  The film keeps the two brothers apart for as long as it can, and their eventual meeting is an acting dozy and a visual marvel (it's basically set up as an old-west style duel, where the weapons are not guns or swords but incriminating words).  By the default of having an onscreen family and onscreen friends who cheer for him, Brendan comes off slightly more sympathetic by the end.  But Gavin O'Conner never lets us forget that Tommy, and technically every other combatant in the tournament, has his own hopes, dreams, and legitimate reasons for seeking victory.

The fight scenes are filmed with an eye toward authenticity, and the onscreen battles do seem to match my limited knowledge of MMA fighting.  Yes, there is a bit more actual give-and-take in a handful of the matches, but the film never approaches the fantastical choreography of any number of boxing dramas.  The scenes are shot with a mix of close-ups and long shots, and they are edited for maximum visual and narrative clarity.  Like most good sports movies, the actual sporting event itself is among the least important parts of the story.  Nonetheless, those going out of their love of MMA or UFC-type combat will not be disappointed.

The picture flirts with contrivance and cliché (it at-times feels like a smoothie composed of the best bits and pieces of the Rocky pictures and The Fighter), but comes out the other side due to a refusal to pander or insult our intelligence.  There are no 'big speeches' and plenty is left unsaid.  I appreciated the fact that we never get any details about just what horrors Paddy committed against his family back in the day, only offhand implications.  I appreciated that the film takes it for granted that Brendan loves his wife and his children and doesn't feel the need to add gratuitous displays of 'emotion' (IE - no overacted playtime with kids, no flashes to happy moments during a climactic moment of struggle, etc).  And, without going into details, I love that the film doesn't resolve its deep family hurts by the end of the picture, but rather puts its characters in a place where at least some of these characters have a chance to repair the long term damage if they so choose.

Warrior is above-all an emotionally engaging and uncommonly thoughtful family drama.  It rises above most in its genre by refusing to pit 'good' against 'evil' and by refusing to pander to our lowest emotional denominator.  It features moments of genuine insight and recognizable human interaction that feel so 'right' that you almost want to cheer.  Like the best of its genre, it is less about who wins or loses as opposed to who is in your corner when the game ends.  It does have several crowd-pleasing moments, and few of them are the sort that you'd expect in this genre.  It features wonderful performances across the board, and I could easily see this film's cast dominating the year-end awards race if the film hits it big at the box office.  Aside from too-much 'on the nose' play-by-play announcing during and between the fight scenes, the film has dialogue that rivals anything you're likely to hear this year in terms of authenticity.  Warrior is a wonderful movie and a pretty great film.

I wore these socks through the worst blizzard I can remember. They are warm and comfy. Boots that used to rub after a few hours can now be worn with all day comfort.
Warrior Combat Boots