So desperate for water that I'll drink the sand: Why I still want to see Abduction. 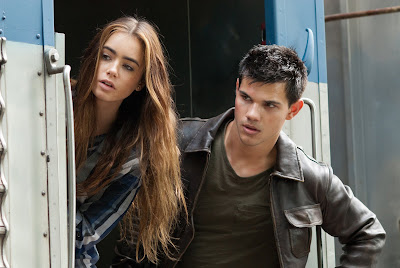 As a film critic, I'm not supposed to want to see this one.  I'm supposed to recoil in horror and the genuinely bad acting on display in the two trailers from lead Taylor Lautner.  I'm supposed to roll my eyes at the apparent cynicism that comes with giving this untested (as in 'open it yourself') actor several action franchises on the strength of a supporting role in a popular series.  After all, I've complained about the same circumstances in regards to Jeremy Renner.  But come what may, the film itself looks like a glorious throwback to the trashy, borderline exploitative cheese ball action thrillers that went away at the beginning of the last decade.  And I do miss this stuff with a passion.  If someone other than Lautner were in the lead (or if the previews made it apparent that Lautner gave a better performance), I'd be rather jazzed to see it.  Without a lead actor I can endorse, it's still probably going to be worth seeing.

Even if we omit Lautner from the cast list, we still have a film that features (roll call...) Alfred Molina, Sigourney Weaver, Jason Isaacs, Maria Bello, and Michael Nyqvist (the jury is still out on Lily Collins as the token love-interest/probable third-act hostage).  So we've got an all-star cast of character actors and B-level stars, just like the Paramount stuff from the 1990s.  Plus, we've got one of the best action directors alive.  John Singleton may be hit-and-miss in terms of the overall quality of his films, but he is one of the best American action directors currently working today.  The second-act shootout in Four Brothers was the best modern-day shootout of the last decade.  The second act running gun battle in Shaft was pretty high on the list as well.  And while it may be the silliest and most disposable of the franchise (though not the worst per-se), 2 Fast 2 Furious has some of the most impressive car chases and stunts this side of Fast Five.  We can argue that it's unfortunate that he no longer makes socially-relevant dramas about race and class, but his skills as an action director put him on a very short list alongside (or perhaps just below) James Cameron, Martin Campbell, Peter Jackson, George Lucas, Steven Spielberg, and John Woo.  So at the very least we'll be getting some high-quality action set-pieces from someone who knows how its done.

Great cast, terrific action director, a decent budget, and a goofy and amusing premise... sounds like at least something worth $6 for a morning matinee right?  The truth is I miss the kind of star-filled and character actor-drenched pulp that filled up the studio coffers pre-2001 before the studios slowly went 'all fantasy big-budget tentpoles, all-the time'.  I miss the likes of Along Came A Spider, Narrow Margin, and even mediocrities like Taking Lives or The Sentinel.  So even if Taylor Lautner is as bad as the trailers make it seem, I cannot imagine Abduction being less than trashy fun.  If I can ignore Mark Wahlberg and still enjoy Antoine Fiqua's Shooter (which starred - deep breath - Elias Koteas, Ned Beatty, Danny Glover at his 'I'm wearing old dentures' best, Michael Pena, Rhona Mitra, and Rade Serbedzija), then I surely can ignore Lautner and enjoy the pulp thrills that Abduction may offer.  And if the ads are deceiving and Taylor Lautner has the goods, then we may really be in for a B-movie treat.  We'll see, but I'd be lying if I said I wasn't looking forward to finding out.

You left out Zack Snyder and included George Lucas?! Lucas deserves a spot, but only after mentioning Snyder at least. And the best part about "Shooter" was Kate Mara (followed by Wahlberg) and you forgot her as well. And come what may for the roles she gets/takes, Lily Collins really is the next "it" girl, as they say, or at least should be.

Other than that, I agree: Singleton, and I'm intrigued. Lautner, and I'm quickly disgusted. Collins, I can watch again in "The Blind Side"

Oh gosh, "Abduction" is the best comedy of the year! It's a so-bad-it's-good classic in the making, I can tell. The best bit involves a bomb and an oven. it's pure comedy gold.

I could take or leave Kate Mara, as I find her sister's film choices (even before her apprenticeship with David Fincher) to be far more intriguing. But yes, I should have remembered Zack Snyder, especially considering how well he pulled off HUGE-scale action in Sucker Punch.