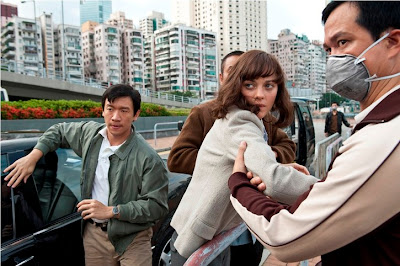 It was good news/bad news at the box office this weekend.  Two critically-acclaimed adult entries squared off and only only came out shining.  The winner for the weekend was Steven Soderbergh's Contagion (review), grossing $22.4 million from 3,222 screens.  The all-star pandemic thriller fits squarely into the realm of Soderbergh's 'commercial ventures'.  With the exception of Erin Brockovich (which was a Julia Roberts vehicle), Soderbergh alternates between artier and sometimes experimental fare of varying quality (Bubble, The Limey, King of the Hill - good!  The Girlfriend Experience, The Good German, Full Frontal - bad!) and all-star genre entries that are inherently populist and commercial even with their occasional artier sensibilities (Ocean's 11, Traffic, Out of Sight, etc).  But even his commercial ventures are generally aimed at adults with adult sensibilities, so the solid opening weekend is to be celebrated.  The well-reviewed film played mostly to the over-25 set, which means it has a chance at solid legs as the younger kids check it out over the next month. It earned a B- from Cinemascore, which is probably owed to the fact that it's genuinely unnerving in its plausibility (audiences claim to love horror but don't like to be actually disturbed or frightened) and artier than its trailer lets on. I haven't seen it yet as my son had a contagious infection over the weekend.  We considered taking him on Friday afternoon and hoping he would cough in all the right places for maximum comedy, but we thought better of it (we saw it Sunday evening instead). 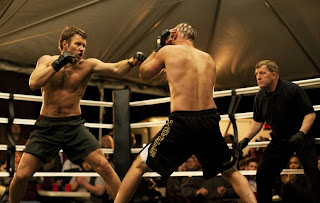 While Lionsgate's Warrior (review) was never expected to win the weekend, as it was on just 1,800 screens, its mere $5.2 million opening weekend was somewhat of a shock.  It was expected to capitalize on the rave reviews and solid buzz that Lionsgate had built through a number of 'word of mouth' screenings all around the country, as well as a national sneak preview last weekend.  In hindsight, perhaps Lionsgate should have released the film last weekend, as the buzz seemed to have peaked then.  There are two ways to look at this.  One way is simply to say that the MMA-themed family drama was never that appealing to general audiences, and that the rave reviews and aggressive Lionsgate marketing campaign simply built up unrealistic expectations (unlike The Fighter, it lacked stars and a token romantic subplot).  And it's just another sad commentary on the strength of the marketing branches of the smaller studios (Lionsgate, Summit, etc) versus the bigger studios.  Or, this could just be another weird mid-September miss in the vein of Whip It (review) in 2009 and That Thing You Do in 1996.  All three films came into their mid-September release date with rave reviews, terrific buzz, and successful national sneak previews the week prior.  But all three of them more-or-less flopped, despite everyone's best effort.  Anyway, the film is fantastic, so there is always a hope that audiences discover it later.  As it is, the film's Oscar chances are pretty much dead, although Nick Nolte may still squeak by with a Best Supporting Actor nomination. 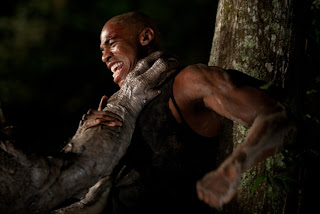 There were two other inexplicably semi-wide releases, including a monster movie that got 1,500 screens at the last minute for reasons yet unexplained.  Bucky Larson: Born to Be A Star went out on 1,500 screens mainly due to the fact that it is a Happy Madison production (IE - Adam Sandler's involved).  It still scored a 0% on Rotten Tomatoes, and we can only guess that much of the $1.41 million weekend take was from critics who shelled out their own money to review the film on Friday morning.  I don't usually quote studio releases, but Sony's was refreshingly honest: "Clearly we were hoping for a better result. While the movie was made and marketed on a very modest budget, it didn't work out the way we hoped."  I'll leave it at that and wish them better luck with Moneyball in two weeks. The other film in question is the equally trashed Creature.  The would-be direct-to-DVD monster movie scored just a single positive review (from the Los Angeles Times) out of 16 critiques.  Anyway, the film grossed just $327,000, which is the fifth-worst wide-release opening in history. For the record, that's a stunningly poor $217 per-screen average, which is the second-worst in history for a wide-release. So we'll hope Bubble Distribution didn't spend too much on marketing.  In better limited release news, the under-the-radar Kevin Hart stand-up concert film Laugh At My Pain earned a scorching $19,474 per-screen in 97 auditoriums.

In holdover news, the drops were generally large this weekend, as often happens after a holiday.  The Help (essay) pulled in another $8.9 million, putting its total at $137 million.  When Contagion took over the top spot on Friday, it broke a 25-day streak at the top of the daily box office, a number not seen since The Sixth Sense topped it for 35 days back in 1999.  Colombiana came in at fourth place with another $3.9 million, for a new total of $29 million (essay).  Both Apollo 18 (-67%) and Shark Night 3D (-59%) and ended their second weekend with just under $15 million.  The Debt dropped a rather large (for an adult thriller) 50% in its second weekend, which is especially troubling given that the movie opened on a Wednesday.  Still, blame the adult-competition that was Contagion, and the $20 million-budgeted film still has grossed $21.8 million in twelve days (essay).  Spy Kids 4D has $34 million while Our Idiot Brother and Don't Be Afraid of the Dark both have $21 million.  Rise of the Planet of the Apes sits with $167.8 million, and it should pass Captain America ($173 million) in the next week or two.

That's it for this relatively quiet weekend.  Join us next time when Ryan Gosling tests his movie-star mettle with the critically-acclaimed artsy action film Drive  while Sarah Jessica Parker stars in the 'struggles of the working mother' dramedy I Don't Know How She Does It.  In less original territory, Rod Lurie's remake of Straw Dogs also opens in wide release, as does Disney's 3D-conversion of The Lion King.  Until then, keep reading and commenting (summer movie review I, II, and III), and please check out Warrior.

you say to point out typos, so I will. The Ryan Gosling vehicle next weekend is called "Drive" not "Driver"

Sad that Warrior didn't do well though, that film would've been a major crowd-pleaser.

also, first sentence you have a double only.