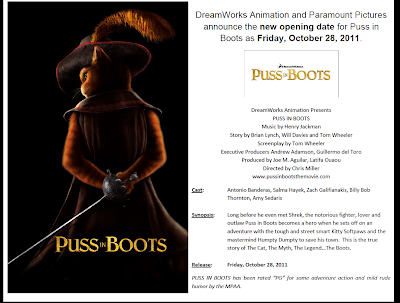 Well this comes out of left field, or perhaps not.  As you can see above, Dreamworks Animation has shifted the release date for their Shrek spin-off from the plum 'start of the holiday season' date of November 4th (where cartoons such as The Incredibles, Monsters Inc, Megamind, and Madagascar 2 all successfully debuted) to the crowded Halloween weekend.  What is odd about this is that November 4th was a pretty open weekend, with only Brett Ratner's Tower Heist and A Very Harold and Kumar Christmas representing competition.  But October 28th already has four wide releases - In Time, Anonymous, Johnny English Reborn, and The Rum Diary.  Puss in Boots would have likely won the weekend no matter which of these two weekends it chose to debut on, so the question is, 'why the date change?'.

I have two theories, both of which are PURE speculation (I tossed an email to a Paramount contact and I'll update if I actually get a response).  First of all, I have to wonder if the announcement regarding Mission: Impossible IV's early IMAX release played a role.  If Puss in Boots were promised a certain number of weeks in IMAX, then  the easiest way to accommodate both parties (since Dreamworks Animation is, for the moment, still under the Paramount umbrella).  The second, and most logical assumption, is merely that Dreamworks felt that the four relatively minor releases (in regards to box office, not necessarily quality) would  still be weaker competition than the all-star Tower Heist and the ever-popular Harold and Kumar series.  Megamind debuted to $46 million last November, and its presumed that the film took an opening weekend hit from the respective strengths of Due Date (which opened with $33 million) and Tyler Perry's For Colored Girls (which debuted with $19 million).

It's no secret that Dreamworks thinks that Kung Fu Panda 2 took a hit domestically (it was a $661 million monster worldwide) because it opened head-to-head with The Hangover part II, a film that dominated the young male demos that a big-budget cartoon needs to justify the large budgets (you can't be a blockbuster just servicing kids).  It is reasonable to assume that Dreamworks felt that Harold and Kumar Apologize For the Awful Second Film and/or Tower Heist represent the same kind of quadrant threat that the respective Todd Phillips comedies did the last two times at bat.  Whatever the case, it stands to reason that the film will open with the usual Dreamworks $43-48 million and end up in their $145-165 million comfort zone.  Let's just hope the movie is half-way decent...