Review: Kill List (2012) is an experiment in genre-switch that fails to truly engage. 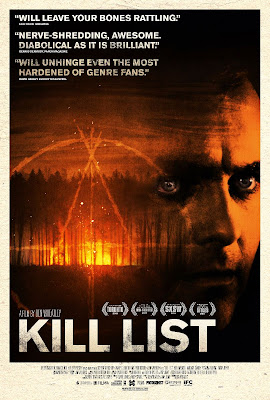 Ben Wheatly's Kill List suffers from the believe that it is far more clever and original than it actually is.  It earns points for not exactly beginning and ending in the same genre, but the journey is frankly not worth the destination.  The film is technically a dime-a-dozen crime story about a hit man trying to do a job under trying circumstances.  Where it goes in the third act I will not reveal (although don't look too closely at the poster), but the majority of the film is taken up by somewhat cliched characters and relatively unengaging drama  Only the uncommonly gruesome violence, delivered in a clinical and brutal fashion, serves to distinguish the picture.  Even the third-act turn, while somewhat organic and slightly clever, loses points for eventually ending in an almost identical fashion to another 'extreme' horror drama from last year.


The plot, to wit, concerns two veteran hit-men on a job to kill three targets.  Jay (Neil Maskell) is recovering from a botched job a year ago, and his wife (MyAnna Buring) is giving him grief over financial obligations.  Joining him in this new and seemingly promising assignment is Gal (Michael Smiley), who is there as much to chaperone his old friend as do the job in question.  But as the body count rises and Jay and Sam's new employers keep upping the stakes, Jay's mentally instability threatens everything, including the safety of those around him.  That's all you need plot-wise, so I'll stop there.  But despite its billing as a crime thriller, the strongest portion of the film is actually the series of domestic arguments that make up much of the first third.
The bitter and authentic disputes between Jay and his wife Shel frankly are more compelling than the rote 'let's go find our targets and kill them' motions that follow.

There are moments that pique the viewer's interest, among them when at least one of their intended targets seems grateful for his execution, and its clear that writer/director Ben Wheatly (along with co-writer Amy Jump) are playing a relatively novel game.  The film basically exists in three different genres over its three acts.  In short, they are trying to make a film from specific genres that doesn't reveal itself as said genre until the characters realize it as well.  But good intentions don't make up for a somewhat faulty delivery.  Much of the second act is downright dull and monotonous, while the third act will leave the viewer alternately amused at the outcome and checking off the films where they've seen this material before.  Wheatly elicits solid performances from his cast, and its clear that he has the technical chops to excel somewhere down the line.


Kill List is an ambitious miss, a good and clever idea with no real energy of its own, a certain slack pace, and little to keep us entertained in the middle hour besides moments of graphic violence.  I appreciate and like the movie that Kill List wanted to be far more than the movie it is.

I don't disagree with your review. I want to add, that this film does work well on a repeat viewing. There's little things scattered throughout that are far more clever and visible the second time around.