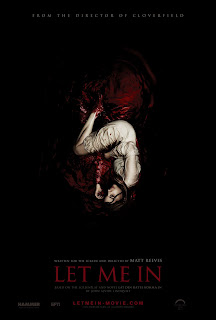 Let Me In
2010
115 minutes
rated R
Opens nationwide from Overture on October 1st.

Let Me In is a fine motion picture, a moody and character-driven horror film that shows a patience and intelligence rare in the genre. It is visually gorgeous, subtly acted, and genuinely unnerving in several key moments. It is surely one of the better genre pictures of the year, and it heralds director Matt Reeves (Cloverfield) as a genuine talent, having succeeded with two very different horror pictures in just over two years. Yes, it is a remake of the equally fine Swedish horror film Let the Right One In, and it is nearly identical in structure and narrative to the earlier picture. But, this remake is just different enough, in both character choices and focus, to stand beside the original with pride and on its own as a remarkable horror film.

A token amount of plot - It's 1983 Owen (Kodi Smit-McPhee) lives with his newly-separated mother in a small apartment complex in New Mexico. He is lonely and embittered, having suffered the near daily victimization at the hands of a trio of school bullies. But a new friendship is formed when Abby (Chloe Crace Moretz), an equally withdrawn twelve-year old apparently living with her father (Richard Jenkins), moves in next door. Abby is slow to open up, initially stating that the two children cannot be friends. But as friendship and possibly something more blossoms, a series of savage murders rock the small town, and Owen realizes that Abby's arrival and the murder spree may be connected in the most unexpected way. In short, Abby is a vampire, possessed with the need for a constant supply of human blood.

For fans of Let the Right One In, Matt Reeves's Let Me In is akin to seeing your favorite play redone with a different set of actors in a slightly different setting. It's the same story, but what a joy to see such pros as Richard Jenkins and Elias Koteas (sympathetically beaten-down as the cop investigating what he thinks are satanic homicides) play in this particular sandbox. Koteas especially proves that he is one of the most reliable character actors around, as he brings credibility and empathy to every role he plays. Chloe Moretz turns in her second bravura performance of the year, as the Kick-Ass star again brings three-dimensionality and warmth to what could have been a stock character-as-plot point. Kodi Smit-McPhee has the hardest role, as he is in nearly every scene of the film yet is reactionary for most of the running time. None of these actors get big acting moments or big speeches (there is very little dialogue in the film), but each member of the relatively small cast makes the most with their face and their body language. This film, if nothing else, is a master-class in underacting.

Like the best live-theater revivals, Matt Reeves takes the previous picture and stays mostly true to the story and the tone. There are minor alterations, mainly simplifications of the narrative so that the film can focus on our main characters. Aside from a major second-act incident being used as a tone-setting prologue, a stunningly-shot car accident sequence in the middle of the film, and a slight alteration near the climax that gives Koteas more to do (the latter two are among the best scenes in the film), the plot is pretty-much beat for beat from the Swedish picture. But while Tomas Alfredson's original had a certain objective and clinical feel, Matt Reeves brings a tighter, more claustrophobic feel to the proceedings. The film is shot largely in close-up, as the camera pulls away only to capture the moments of violence, only to then close in on the carnage. The special effects are minimal and precise, with Reeves only using CGI to allow action to occur in long, unbroken takes. Because Reeves puts a greater emphasis on the human face, the violence actually has more sting than even the first picture.

Setting the film in 1983 small-town America turns the story on its ear. Owen's home life resembles a Spielberg-ian broken home, which makes Owen's relationship with his new-found special friend into a ghoulish, R-rated variation on ET: The Extra-Terrestrial. Yes, some relationship details are excised and a major revelation about the young girl is no longer there (hint - there is no nudity), streamlining the story and making the characters more 'normal' actually increases the unsettling nature of the story. Abby is just a girl with a major problem, and Owen is just the young boy who is trying to understand his new friend. What is similar about both films is the refreshingly asexual portrayal of vampirism. While most vampire stories use vampirism as a metaphor for rape (Buffy the Vampire Slayer) or allegedly inappropriate sexual behavior (Twilight, The Lost Boys), these two films treat the condition as a crippling addiction, with nothing remotely glamorous or envious. There is nothing cool or hip about Abby's unquenchable need for blood and the damage it reeks around her.