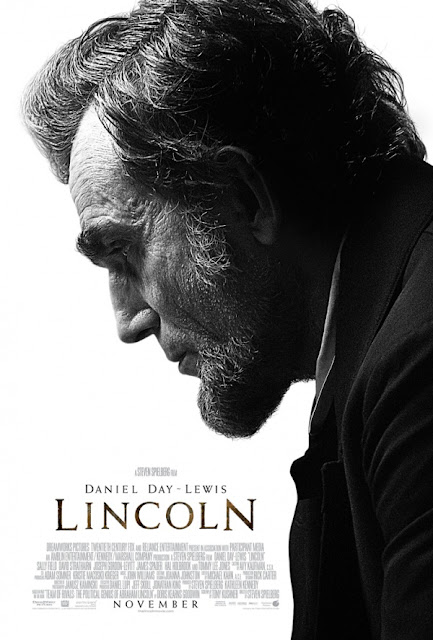 In terms of long-gestating passion projects, Steven Spielberg's Lincoln (trailer/background) is much closer to Tim Burton's Sweeney Todd than Martin Scorsese's Gangs of New York.  In what may qualify as irony, the film is slightly undone mostly by its perceived duty to be incredibly important.  Yes, the film is about an very important person (Abraham Lincoln) during what may arguably be the most important portion of his life (his month-long battle to bring about a constitutional end to slavery), but Spielberg's refreshingly micro-targeted biopic is at its best when it is lightest on its feet, telling what almost amounts to a political caper set at the end of the Civil War. Tony Kushner's literate and thoughtful screenplay (based on a portion of Doris Kearns Goodwin's A Team of Rivals) stages what amounts to a 1860s-set series arc from The West Wing, as a wise president blessed with verbal diarrhea articulates grand ideas and espouses telling anecdotes while those on his staff do the political dirty work to make great things happen. As a look into how politics worked in the mid-1800s, and of course how it still works today, it's surprisingly funny and endlessly compelling.  But the need to create a defining portrait of our sixteenth president creates both needlessly solemn subplots and some narrative repetition that prevents true greatness.

Yes, Daniel Day-Lewis makes a pretty terrific Abraham Lincoln, but that surely goes without saying.  But the performance is ultimately reduced to an unending series of monologues that reveal deep thoughts and anecdotes that reveal timely insights.  The same scene happens over and over again: the other characters frankly discuss the issues at hand using somewhat 'normal' English only to be interrupted when Mr. Lincoln explains the situation in only the most obtusely articulate fashion humanly possible.  The film even calls itself out on this, as Bruce McGill gets a huge laugh complaining that Lincoln is about to tell yet another story.  Yet said self-satire occurs at the start of the second act and the practice continues unabated.  It may be historically accurate, but it makes for repetitive storytelling.  Like Day-Lewis's somewhat overrated turn in There Will be Blood, his unquestionably entertaining work here is such *ACTING* that it only barely avoids becoming caricature.  Day-Lewis, and the film itself, works best when Lincoln is objectively explaining the score, as occurs in a wonderfully written scene where Lincoln lays out how his possibly illegal 'war powers' has made it necessary to outlaw slavery before the war ends.

The other major scenery chewing comes from Tommy Lee Jones, as fiercely 'radical' abolitionist Thaddeus Stevens who has to put aside absolute moral purity to help achieve moral decency.  David Strathairn (as William Seward) deserves major kudos, as the famously low-key actor keeps everyone else around him grounded. The timeliness of the film's behind-the-scenes political deal-making goes without saying, as we are again presented with a morally sound president trying to achieve a constructive good in the face of both unrelenting obstructionism and those theoretically on his side who see good as the enemy of perfect.  The rest of the case is fine, and it's quite fun playing 'spot the character actor' as one recognizable face after another turns up to lend Spielberg a hand (among them, Hal Halbrook, John Hawkes, James Spader, Jackie Earle Haley, and Jared Harris).  While the film of course plays as the Abraham Lincoln show, none of these actors allow these characters to feel like supporting players or extended cameos in their own lives, so to speak.

The film struggles a bit with how to present black faces onscreen, as it comes off as somewhat pandering seeing always 'noble' black characters waiting around for balding white men to give them their freedom.  I'm not sure how the film gets around that, but it's a small issue.  For what it's worth, David Oyelowo has a great moment in the very first scene as he complains to Lincoln that black soldiers are getting paid less than white ones.  Lincoln dodges the issue and launches into a colorful speech while the camera lingers on Oyelowo's face as he is all-too-aware that Lincoln is bullshitting him.  To the film's credit, Spielberg and Kushner never paint Lincoln as a wise-beyond-his-time saint of race relations. He is merely among many presented as unsure what should come of a nation of free blacks, convinced merely that slavery itself is immoral.  No one is completely clean and no one walks away without a little dirt in their fingernails.  That's of course one of the points of the film, that righteous moral superiority is a surefire way to continued immorality.

In terms of 'modern day relevance', the most telling aspect is the open-faced bribery that occurs as Lincoln attempts to garner the needed votes.  In short, those who spent the last four years why Barack Obama wasn't as transformative as FDR or LBJ don't realize that the explicit wheeling-and-dealing that made up many a major backroom deal is now mostly illegal.  Oh sure it still happens, but it's no longer so out-in-the-open.  The film obviously speaks to the idea that government can do great things that raises all boats and that compromise, even from the minority party, is essential in functional governing.  The Civil War itself is mostly referred to from the outside looking in, although Spielberg opens the film with a grisly and brutal battle sequence that hammers home both the mass carnage and the intimacy of its violence.  Another scene set in an army hospital offers some jolting imagery that arguably pushes the film's otherwise deserved PG-13 to the plausible limit.  What this violent imagery establishes is both the horror of the war itself and an understanding of why so many otherwise decent people would have rather not risked ending slavery if it meant possibly prolonging the nearly-finished war.

There is a pretty terrific 105-120 minute movie stuck inside a mostly solid but overly reverential film.  As is often the case with somewhat male-specific procedurals, it burdens itself with family life in an attempt to make our hero more relatable.  The subplots involving Mary Todd Lincoln (Sally Field) and Robert Todd Lincoln (Joseph Gordon-Levitt) are both somewhat cliche (she is still mourning their late youngest child while he feels obligated to serve with the Union army) and not remotely interesting, especially when compared to the political and legal tiddly-winks being played on the main stage.  Moreover, as is often the case with Spielberg of late, he doesn't know when to finish, in this case going on a good 10-15 minutes after its natural conclusion and ending on a note of utter green cheese.  There are a couple places where the film could have ended, including a lovely grace note for a major supporting character, but the film feels the need to tack on a openly contrived 'Here's how you end a biopic!' cap which just doesn't work. Had the picture focused purely on the political exercises at hand, without the need to 'humanize' its towering president in somewhat generic ways, we'd have a tighter and arguably better picture overall.

But the film we do have is merely very good.  The film is well acted by an obscene number of crusty character actors, it looks authentic without reveling in period detail, and features a strong screenplay.  That Day-Lewis ends up feeling a bit repetitive and somewhat over-the-top in spots doesn't necessarily detract from the non-stop entertainment that his showy star turn provides.  The film has plenty to say about both the time in which it is set as well as today's political climate, and it condemns the obvious evils of slavery without painting those who opposed it as squeaky-clean saints.  If not for a needless focus on Lincoln's family drama, as well as an unnecessary epilogue, this would be the masterpiece that it so clearly wants to be.  But for now, Steven Spielberg will have to settle for having made a very very good political drama that operates with keen insight both into the governing process of its day and into the mind of its defining leader.  Come what may, it is a wonderful thing that Steven Spielberg is still making films this good and this relevant.