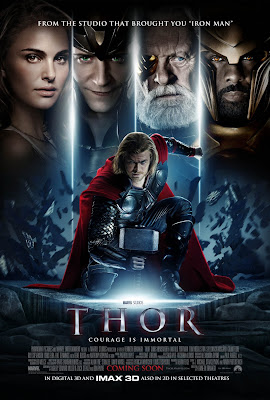 Despite Marvel and Paramount's best marketing efforts to convince otherwise, Kenneth Branagh's Thor is a perfectly satisfactory piece of popcorn entertainment. It is cheerfully silly and openly operatic, but played out with absolute conviction. It is no great landmark in the realm of comic book films, but it is easily the best of the Marvel-financed films thus far released. It has larger than life action with human-scale emotions, and Branagh directs with an unexpected confidence that seeps through the finish product. It is no great piece of art nor defining statement of our times, but its good-natured pomp makes its obvious flaws almost endearing.

A token amount of plot: Young Thor (Chris Hemsworth) is about to be crowned king of Asgard when the pesky Frost Giants attempt an act of robbery/murder with world-threatening implications. King Odin (Anthony Hopkins) wants to deal with the matter in a diplomatic fashion, but the headstrong and angry Thor insists on violent retribution, with action that threatens full-scale war. Enraged that he nearly put a petulant would-be child on the crown, Odin banishes Thor to the distant planet known as Earth, with the implicit instructions that he not be allowed to return until he earns his birthright by learning of his humility. Stuck on Earth with no powers, he immediately has a run-in with three traveling scientists (Natalie Portman, Kat Dennings, and Stellan Skarsgard), and attracts the attention of Shield (once again personified by Clark Gregg). As Thor acquits himself to a human life and finds himself falling for Dr. Jane Foster (Portman), Odin's other son, Loki puts himself on the throne and sets some most unpleasant plans into motion. Can Thor win back his throne and defeat his brother's machinations? Considering that The Avengers is coming out next year, I'm guessing the answer is some variation on 'yes'.

First off, unlike the heavily-tinkered-with Iron Man 2, Thor remains a mostly stand-alone adventure. There are a few references to Tony Stark and Bruce Banner, and Greg Clark once again hints at a larger universe, but the film is first-and-foremost a character journey for Thor himself. Even with a second act that has perhaps a bit too much Shield material (taking time which could have been better spent developing the undercooked romance between Jane and Thor), this feels more like its own film with its own beginning, middle, and end. Marvel apparently stayed out of Branagh's way this time around, allowing him to craft a narrative that is mainly in service to itself. Even a brief cameo in the second act feels somewhat organic even though it was in fact added at the last moment. As a result, while the film has few plot twists, I was indeed surprised by a couple climactic story turns.

As an action picture, the film unfortunately peaks right at the beginning. The first act battle, Thor and his friends versus the Ice Giants, is a whopper of a curtain raiser. It starts out as one of those overly-edited, shot-too-tight battle scenes but slowly expands its scope and fluidity. It also shows these mighty warriors at the peak of their abilities right off the bat, which a refreshing change of pace from the standard origin story cliche. But the rest of the action, while not unimpressive, fails to equal the scale and scope of that initial conflict. Even the finale, which puts Thor and Loki against each other on the visually dazzling rainbow bridge, is brief and perfunctory. Compared to the action we've already seen in films such as Sucker Punch, Thirteen Assassins, and Fast Five, Thor doesn't quite get as epic as it perhaps should have.

Fortunately, the picture works as a character piece. Pretty much every actor treats this, appropriately enough, like Shakespeare. Hemsworth takes this gift of a role and runs with it, delivering a star-making turn that makes us sympathize with Thor's initial recklessness and yet still believe his lightning-fast transition into a better person (the 'rock bottom' moment is potent enough to make us buy Thor's instant humility). Anthony Hopkins once again shows that he is at his best in pulp fiction entertainments, delivering a passionate piece of performance art. Our three scientist pals are all genuinely funny and relatable. Portman is looser than usual here, as she openly swoons/lusts over the studly and charming would-be warrior god while remaining steadfastly committed to her research. I didn't buy their relationship as anything more than a brief flirtation, but most 'great love' stories in genre films fail that test. On a side note, it's kind of refreshing for a boy-centric action picture like this to let the girls do all the lecherous leering for once.

Skarsgard is basically around to provide exposition (although I imagine he'll be a character who hops around the Marvel universe ala Greg Clark) and Kat Dennings is purely charming comic relief (on a prurient note: long-haired Dennings + nerd glasses = 'winning'). Tom Hiddleston steals the picture, as his thoughtful and compelling villain makes the film work as an emotional fable. While Loki is indeed sinister, his motivations are reasonable and his feelings are genuine. Like Willem Dafoe in the first Spider-Man film, he brings everyones' game up a notch and his big dramatic scenes with Hopkins and Hemsworth are the highlights of the picture. Alas, most of the rest of the cast is used for background scenery. Rene Russo returns from retirement (as Thor and Loki's mother) for only a single scene and a few lines here and there. Idris Elba has fun as the guardian of the rainbow bridge teleportation device, but his screentime is painfully brief.

The technical aspects of the film are a mixed bag. Branagh's infamous dutch-angles are so ever-present that I half-expected William Dozier to break in and announce that The Penguin had just robbed a bank. The special effects are not exactly what you would call photo real, but their obviousness frankly adds to the film's goofy charm (the shots of Thor and company flying through the inter-dimensional portals are just plain neat). The 3D is invisible, which is arguably a good thing as it also doesn't seem to darken the image all that much. 3D qualms aside, it is a film worth seeing in IMAX if one is so inclined. There are genuine leaps in logic (Loki is very smart except when he is very stupid) and some real head-scratchers. Norse mythology is acknowledged in the picture, yet no one suspects that trickster-god guy of being, I dunno, tricky? It's the same logic that has the Autobots SHOCKED when they get betrayed by the DECEPTicons.

But these obvious issues (especially the needless Shield material) didn't bother me as much as one would expect. Maybe it's because I have no hard fandom of Thor, so I was only expecting a piece of colorful and larger-than-life entertainment starring actors I happen to enjoy. Maybe it's because Thor is a far humbler picture than the arrogant and entitled Iron Man films or the patronizingly dumbed-down Incredible Hulk (aww, did Ang Lee make you think too much?). And Thor is quite a bit of family-friendly fun (the PG-13 rating is a joke, this is PG material all the way), and its gee-whiz innocence allows you to overlook its narrative issues.

It doesn't quite score as an action film and not every element works. But the raw emotionalism of Tom Hiddleston and Chris Hemsworth raise the picture above its obvious flaws. The scale and opulence of the Asgard material balances well with the quirkier Earthbound middle act. Kenneth Branagh's Thor is not a patch on the best films of the comic book genre (X2: X-Men United, The Dark Knight, Superman, Spider-Man), but it is a genuinely enjoyable adventure. For this casual visitor to the world of Asgard, that's enough for now.

Grade: B
Posted by Scott Mendelson at 6:35 AM

Fully agree with your review here. Even down to the Ang Lee remark (I like Hulk esp as a film that came in before Nolan's Batman films). I found the second act to be a little dry, but loved Hemsworth, The Visuals and the scope which I also believe has unfortunate diminishing returns.

Shocked we got it before you guys in the U.S also

I've found your reviews to be more right than not. I'm a comic book fan, but could never get into Thor (even the Simonson era). Did not have any interest in seeing the movie. Till your review. Now I'll check it out with friends. Thanks as always for the articles.

Natalie Portman is amazing. I want to watch "Your Highness" !!

"allowing him to craft a narrative that does is mainly in service to itself."

Do I get a prize?