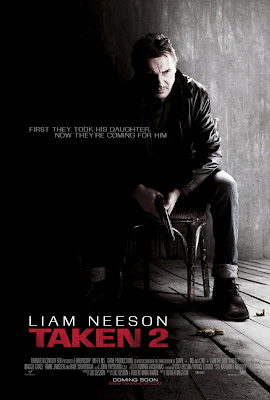 Despite my best efforts, I actually saw Taken 2 last night.  Long-story short, I had time to see a film late last night and everything else I wanted to see either had inconvenient showtimes (The Perks of Being A Wallflower), was something my wife wanted to see (Sinister, Pitch Perfect), or was something that my daughter may eventually decide she wants to see after all (Frankenweenie).  And yes, as expected, Taken 2 was indeed a bad movie.  But it was bad in a rather surprising way.  First of all, unlike the lean, mean, and rather cold-hearted original, this sequel not only was edited to achieve a PG-13 in a way the first film was not (the differences in the first film's international R-rated cut and the PG-13 version were minimal), but it was pitched to a younger audience.  Gone were the moments of cruelty or out-and-out brutality.  Gone was the unrelenting determination of Liam Neeson's bad-ass, willing to shoot innocent bystanders and threaten the family of a crooked cop, replaced by a painfully generic "I have to save my wife from bad guys and mostly attack in pure self-defense or defense of others".  With a subplot involving Maggie Grace's driving test, which arguably harkens back to the much-loathed "Jeff Goldblum's daughter proves she shouldn't have been cut from the gymnastic team' gag in The Lost World, and an emphasis on reconciling a dysfunctional nuclear family, the film feels pitched to a weirdly conformist and/or younger audience.


The first film was *almost* relatable, which was a key component of its appeal.  Your kid is vacating overseas and all the sudden she gets abducted by random strangers with nefarious intent.  It's the stuff of Lifetime movies and any number of fear-mongering Nancy Grace stories.  I never bought the film as a wish-fulfillment fantasy primarily because, even with all of his skills, Brian Mills only *barely* rescues his daughter on time.  But it had a primal appeal that also played on some pretty potent old-school xenophobia to boot (Albanians were criminal, French were corrupt, and rich Arabs were kiddie-rapists).  But how about "you're vacationing with your family in Istanbul and you and your wife are abducted by an elderly man who wants vengeance because you slaughtered his son and others in your pursuit of your kid the last time around"?  Yeah, that's not as plausible and certainly not as relatable.  It also removes the amusingly politically incorrect subtext, since the villains are not random scary foreigners but a specific villain (Rade Serbedzija) who has a perfectly reasonable motive for his violent attack.  The whole film feels like a retooling of the franchise to make it more palatable to an audience that arguably shouldn't be seeing a film like Taken 2 anyway.   In political terms, it's the equivalent of screwing over your base to make yourself seemingly more appealing to people who aren't going to vote for you anyway (IE - Democrats).

Even putting aside the PG-13 issues, the action throughout is painfully generic and small-scale.  Liam Neeson doesn't so much engage in brutal showdowns as occasionally punch a gun and/or shoot an offscreen foe.  The first film wasn't so much a genre masterpiece as a breath of fresh air after nearly a decade where the R-rated action film was an endangered species.  Yes, Taken was released as a PG-13 in America but it damn-well felt like an old-school R-rated picture.  This sequel inexplicably not only cuts the film within an inch of its life for a PG-13 that it arguably doesn't need, rendering its action mostly incomprehensible, but it revises the whole template in order to feel like a genuine PG-13 picture.  Lacking R-rated violence or even R-rated subject matter, the film fails to even provide high-quality PG-13 action.  A film doesn't need an R rating to provide quality action scenes.  Heck most of the best action films of the last decade or so (Mission: Impossible: Ghost Protocol, Fast Five, Lord of the Rings: Return of the King, Avatar, etc.) have been purely in the PG-13 wheelhouse (The Incredibles was a PG-rated animated film).   But Taken 2 lacks pretty much all of the above, denying us R-rated content, R-rated sensibilities, and even competent PG-13 action.

As such, it is a mostly worthless picture.  Yes Liam Neeson is somewhat entertaining again.  I'm actually rather fond of the film's climax, involving a surprising conversation between hero and villain, even if the filmmakers lack the courage of their convictions.  But lacking a newfangled narrative, decently staged and/or creative action beats, plus diluting the very appeal of the first film in an effort to 'broaden' the audience while chasing off those who made the first film a hit in the first place.  Obviously I can't deny the success of a $49 million opening weekend and it appears that audiences don't mind seeing a watered-down variation of something they enjoyed 3.5 years ago, but it's a shame that Luc Besson and friends didn't trust the audience's fidelity to a much-liked original.  Would it have been that hard to concoct a story surrounding a rescue mission for Neeson and his CIA buddies instead of slightly reworking the same 'they kidnapped my family member' premise yet again?  Apparently so.  Oh well, I knew what I was getting into and saw it anyway.  I have only myself to blame.  Maybe if I can prevent you from making the same mistake it won't all be in vain. In the end, Taken 2 comes off more like Taken Jr.
Grade: D+
Posted by Scott Mendelson at 10:27 PM