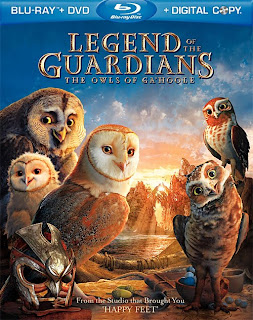 Legend of the Guardians: The Owls of Ga'Hoole (2D version)
2010
97 minutes
rated PG
Available December 17th on DVD, Blu Ray, 3D Blu Ray, iTunes, and Download
by Scott Mendelson
I missed this one in theaters, and seeing it now on this stunning Blu Ray makes me wish I took the time to sample the IMAX 3D version. The film is a pretty generic hero's journey, Lord of the Rings mixed with The Dark Crystal, but it is a visual marvel that never talks down to its young audience. While the locations are striking and the film is occasionally intense, the film reserves most of its overt violence for the final act of the picture, and even then most of the carnage is suggested rather than shown. What is notable is how openly it deals with the glorification of combat. Time and time again, we are told that war is an ugly and terrifying pursuit. Fighting and killing for the side of righteousness is not considered noble or heroic, but simply doing the right thing. There is no glory in battle to be found here, and even the heroic triumphs are viewed as tragic, either in terms of lives lost or having to kill another creature in order to win.
It's a sobering point of view, and one that serves as a counterpoint to the standard narrative that often shows young audiences bloodless conflict with no lasting consequences and no emotional scars on the winning side. If anything, it's a refreshing antithesis to Zack Snyder's own 300, which truly glorified righteous combat to such an extent that I was afraid it would eventually become a propaganda tool. Legends of the Guardians is not a monumental picture, the second act drags while the first act has too much mirth, but the film as a whole is a compelling and occasionally sobering fantasy adventure. It's certainly appropriate for kids over five or six, but there is more than enough, visually and narratively, for adults to chew on as well.
First off, this Blu Ray presents the 2D version of the film. And, it is simply one of the most gorgeous animated films I've ever seen on the format. Colors are eye-poppingly rich, details are extraordinary, and the film is just one frame-worthy image after another. The film is presented in 2.41:1, genuine widescreen, and it's a visual marvel that is genuinely rewatchable for the transfer alone. Of course, the film looked equally dynamite in theaters (it was the rare recent animated film that I viewed in 2D and regretted not seeing in 3D). The film sounds lovely on my non-existent sound system (loud and distinctive, with proper seperation at all times), and the subtitles are crisp and clear.
As for extras, there are a lot of buttons on the Special Features submenu, but the contents are relatively sparse. The biggest and best feature is a full-blown Maximum Movie Mode, entitled 'Maximum Kid Movie'. Like Sherlock Holmes and Terminator Salvation, this is not just a handful of brief featurettes spread out over the course of the film, but a full-blown visual commentary, with storyboards, sketches, and behind-the-scenes footage that runs during and around the film (it stretches the 97-minute film into a 107-minute feature). There is nothing revolutionary about the content, but it is all rock-solid material and worth watching if you're a fan of the movie.
Also on the disc are four still galleries (not my thing, but enjoy), a music video of 'To the Sky', a 2 minute extended scene which explains the villains' backstory in more detail, and a fifteen minute documentary about real owls, hosted by Rico Rodriguez from Modern Family (no, he's not in the movie). The only other bonus feature, aside from the usual DVD/digital copy second disc, is a 3-minute Road Runner/Wile E. Coyote cartoon "Fur of Flying". It's a pretty unique short, as it's all one long gag as opposed to several brief bits. But it's not nearly as laugh-out-loud funny as "Coyote Falls". My daughter didn't laugh at this one either, but I blame her mother.
The film is gorgeous to look at, there's one pretty terrific extra to run through, and you get a bonus Road Runner cartoon. Judge accordingly.