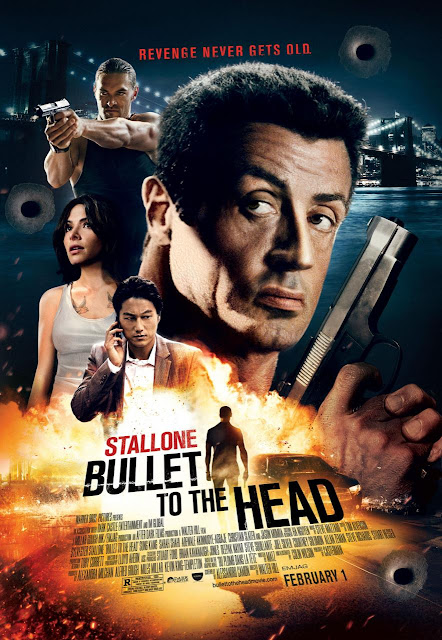 I cannot in good conscience recommend Walter Hill's Bullet to the Head (trailer).  It is an amateurish production that looks and feels like a direct-to-DVD film in all of the worst ways.  It is badly acted, terribly written, and lazily plotted.  It is easily one of the worst films Sylvester Stallone has ever made, and it's a huge step down after Rocky Balboa, Rambo, and the silly-but-large scale Expendables films.  Moreover, it lacks any of the subtext or resonance that has occasionally highlighted Stallone's best work and brightened some of his lesser films over the decades (essay HERE).  Yet it is also the kind of movie that can be a genuine good time in the right frame of mind and with the right audience.  If you have a friend or two who is in the right mood and you waltz into a cheap weekend matinee, you'll probably amuse yourself accordingly.  But for anyone actually expecting quality cinema or even something on par with a mid-range Jason Statham vehicle, just know that this makes The Mechanic look like Safe.

The plot is basic as can be.  Stallone is a New Orleans hitman who seeks answers and vengeance after his partner (Jon Seda) is brutally murdered following a seemingly successful job.  His path eventually crosses with a DC cop (Sung Kang) who is in town to investigate the murder of his former partner.  They of course eventually decide to team up and work their way up the conspiratorial food chain. The story is basic, but the telling is laughably bad.  When choosing the worst component of this film, it's a tough battle between Kang's awful dialogue and Stallone's hilariously obvious and unnecessary voice over that runs through the picture pointing out the perfectly obvious.  The film literally stops dead in its tracks to dole out character exposition monologues and/or plot exposition monologues, such as the moment where the head baddie (Adewale Akinnuoye-Agbaje) stops to explain to his hired gun (a brute and effective Jason Momoa) and his partner-in-evil (Christian Slater, acting as badly as he an) his entire evil scheme for no particular reason other than to let us in on the film's narrative.  I''m also partial to Kang's smart phone, which isn't so much a normal smart phone so much as a variation on the computer-book that Penny used to use to thwart Dr. Claw on Inspector Gadget.

There are a few decent action beats, including a brutal mens' room brawl and a showdown at a hotel spa parlor (at least I think that's where they are, just know that both combatants are stripped down to their bath towels).  There is plenty of R-rated violence and gore and it feels like it was an R from the get-go (those who still hold a grudge against Jon Seda for helping ruin Homicide will find much to enjoy here).  But the fight editing is so choppy that there is a point in the finale where a random villain appears to accidentally throw himself to his death from a catwalk. Pretty much everyone in this film makes the dumbest choices possible, from Kang trusting the least trustworthy local cops in film history *after* a murder attempt to Akinnuoye-Agbaje intentionally antagonizing his hired murder-machine (I do like that a supporting villain warns him against pissing off the super-sized psycho assassin).  I like that Stallone has aged enough over the last 25 years to go from having a sister to be romanced by the co-star and then kidnapped by the villains (Teri Hatcher in Tango and Cash) to having a daughter (Sarah Shahi) who serves the same functions.

Look, I could go on listing the ways in which this film is terrible, but why ramble?  Just know that it's badly acted and badly written, with 90% of the entertainment value coming in the form of accidental and unintentional humor arising out of incompetence. Know that it feels so cheap (despite allegedly costing $50 million) that much of the film is merely scenes of Stallone and Kang talking in the car as they drive to their next location.  Know that it only got a theatrical release because Stallone's other comeback projects have done pretty well, even if this is his first pure 'by myself' standalone theatrical release since Driven in 2003.  If you haven't seen The Last Stand yet (and judging by its box office, you probably haven't), you really owe it yourself to get your 80's nostalgia fix with Arnold instead of with Sly.  That The Last Stand flopped only adds to its symbolic 'the once great Arnold has fallen to where he first began' subtext. Bullet to the Head has no deeper meanings, but is merely a piece of random cheap mediocrity. But if you read all of the above and you still think you might be amused, you just may well be, if only unintentionally.  I'd be lying if I said it was a good movie, but I'd also be lying if I didn't admit that I enjoyed myself.

very nitpicky review. i saw this movie at a test screening and had a blast. don't know why you think the humor was unintentional - seemed pretty intentional to me.

Scott mentioned the guy that seemed to kill himself - it was pretty unintentionally hilarious, along with any time the camera panned to Jason Mamoa to make us feel threatened.

Good review. I always like your writing style and insights but FYI the film does not have any tracks to literally stop dead in. #nitpick