Review: Puss In Boots (2011) is enjoyable, exciting, and intelligent all-ages entertainment plus a master-class in doing 3D 'right'. 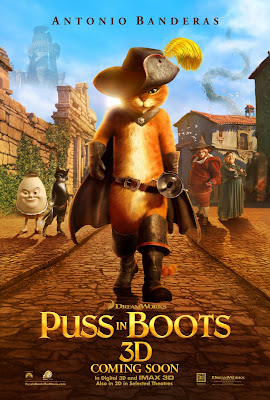 Puss In Boots could have just been a 'one-off' picture from the prolific Dreamworks Animation department.  As a spin-off for a popular supporting character from the Shrek series, it has arguably more built-in appeal than something along the lines of How to Train Your Dragon or Megamind.  The film is already likely to be a big hit no matter how good or bad it is.  But the gang at the current House of Katzenberg refuse to take such easy roads to profitability.  What could have been a cheap and easy spin-off is instead a surprisingly engaging and richly constructed adventure film.  It is yet another sign that Dreamworks is every bit the equal of the Mouse House and they plan on staying there not by 'having their finger on the pulse of popular culture', but by merely making really good cartoons that respect their audience.  And that's what Puss In Boots is.  It's not as breathlessly exciting as How to Train Your Dragon nor is it as epic and emotionally profound as Kung Fu Panda 2.  With strong vocals, a simple-but-satisfying story, occasionally eye-popping visuals, and another master-class in 3D, Puss In Boots is simply a darn good cartoon.

A token amount of plot: Puss In Boots (Antonio Banderas, obviously having a blast being back in this sand... err... litter box) is an outlaw of sorts, a mercenary for-hire who attempts to maintain a token amount of morality as he goes about his business.  But a chance run-in with fellow 'cat-burglar' Kitty Softpaws (Salma Hayek) leads to a reunion with Humpty Dumpty (Zach Galifianakis, in a surprisingly compelling emotional turn), his former best who betrayed him into a life of crime seven years ago.  Mr. Dumpty offers a chance at a big score, with a chance for Puss to redeem himself by atoning for the original sin that turned him into an outlaw.  But as the trio attempt to steal magic beans from the murderous outlaws Jack (Billy Bob Thornton) and Jill (Amy Sedaris), Mr. Boots finds that redemption is not as easy as he thought, and survival may be the biggest challenge of all.

While technically a prequel to Shrek 2, this picture stands completely alone from the world of Fiona and Donkey.  It is merely a fantastical adventure that happens to star a character whom we've met before.  The story is relatively simple, while the complexity lies in the character arcs.  Despite ads that highlighted the comedic material (and there are several hearty laughs to be had), the film is a generally straight-ahead action picture, with the requisite fights, escapes, and stand-offs.  While the film doesn't approach the tragic pathos of Kung Fu Panda 2, the action sequences are shot and edited for maximum intensity even while the bloodshed and hard violence is kept to a minimum.  There are a few frightening moments and scenes of apparent danger, but Chris Miller deftly creates vicious villains that are none-the-less amusing in nature, which should limit the amount of frightened youngsters (my four-year old hid her eyes a couple times, but there was no lasting trauma).  The film's morality is a little complex, as our titular hero is clearly doing bad things for clearly good reasons, which is nothing unusual in adult fiction but may need some explaining to the youngest of audiences.

While the film is not a non-stop joke fest, nor (thankfully) is it riddled with pop-culture references, it does earn the laughs it goes for.  The comedy is generally either character-based or, um... 'cat-based'.  Cat people will frankly adore this picture, as there are any number of clever visual jokes and off-hand bits of dialogue that pay ode to the superior domestic animal (all due respect to my readers, but suck it, dog people!).  Kitty Softpaws's explanation for why she has no claws will resonate with cat owners, as will Puss's casual reaction.  After decades of cats being treated as one-dimensional villains (Cats and Dogs, Babe, etc) or being horribly murdered as a means of building suspense in horror films (let's just say there is no way that the makers of The Roommate would have thrown a dog into a dryer), it's a little refreshing to see a movie where the feline is both the star and the hero, and where the makers have a clear understanding of what it's like to be a cat and/or love a cat.  Again, I say this with utmost respect for the feelings and intelligence of my readers, but go lick your own balls, ye dog lovers (yes, I'm trying to impress my wife)!

It has become a cliche over the last decade to talk about how visually impressive and/or well-animated the latest big-budget animated feature happens to be.  So I'll keep this short.  The film is a glorious visual delight.  It is richly detailed (quite a bit of it is 'shot' in close-up for extra emphasis on facial features) and splendidly colorful.  If I may pay notice to one specific moment; there is a scene about halfway through the picture where our trio end up climbing 'the beanstalk' up to the giant's tower.  Without going into details, this moment is truly awe-inspiring and a wonder to behold.  It is for this sequence alone that the film merits viewing in 3D and on an IMAX screen unless you have financial or health-related objections to 3D.  Dreamworks has been playing around with 3D long-before Avatar.  They are at-this point unmatched when it comes to combining a genuinely immersive environment while providing eye-popping 3D moments that don't feel out of context.  Point being, Puss In Boots is a technical marvel in every plausible way.

It is a testament to how committed Dreamworks is to delivering the goods each time out that this seemingly financially-mandated cash-in is as good as it is.  While it may not be fair to compare Puss In Boots to Cars 2 (which was part merchandise-bonanza, part Lasseter passion project), the truth is that Dreamworks created a solidly entertaining, visceral exciting, and visually dynamic adventure from their 'one for them' project, while Pixar's latest film, um... did not (it's no war crime, but Cars 2 is indeed pretty bad).  As it stands, the artistic failure of Cars 2 and artistic triumph of Puss In Boots can only be a good thing for lovers of animation.  The rare Pixar whiff, combined with Dreamworks being on a two-year hot streak, will only motivate Pixar not to get complacent about their place at the top.  And Dreamworks' continual desire for the respect and acclamation that Pixar receives, as well as the automatic cultural acceptance that comes with being a Walt Disney cartoon, will keep Dreamworks pushing ever harder.  Puss In Boots is no great artistic achievement, but it's a pretty terrific animated film that shows how far the studio has come in regards to raising their own personal bar.  They are a long way from A Shark Tale.

PS - My four-year old also quite enjoyed herself (even if she didn't wear the 3D glasses for very long).  She liked the main characters and asked relevant questions afterward about the story.  For what it's worth, her favorite scene: 'where the two cats dance' is indeed one of the best moments in the film.
Posted by Scott Mendelson at 8:17 AM

I wish more studios would take a look at how Dreamworks is using 3D. I love the technology but I have to keep defending it from sceptics whenever a studio half asses a film in 3D and the technology is blamed for it.

Thank you for your recommendation.I want to tell youTrue Religion Outlet Store is also a good choice.