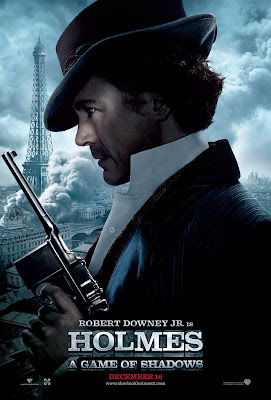 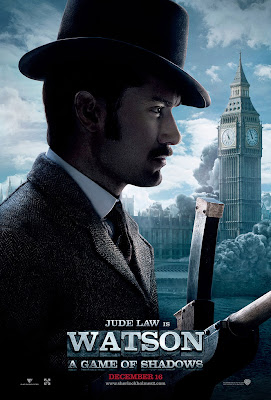 Collider first posted these, but they are pretty self-explanatory.  It will be interesting to see if Warner Bros. releases any more in the coming days, highlight Professor Moriarty (Jared Harris) Mycroft Holmes (Stephen Fry), or Sim (Noomi Rapace).  The cost that comes with casting a character as your prime villain is that you don't get much mileage out of him/her from a marketing standpoint.  Kudos to Guy Ritchie for not just going for the first big star to say yes, but as a result Warner Bros is stuck basically advertising a sequel that offers little in the way of anything different from the first picture.  Ironically, this is the same (relative) problem that Paramount had with Iron Man 2, as it too was stuck with a villain that wasn't quite iconic (Whiplash?) played by that box office-dynamo Mickey Rourke.  Obviously Iron Man 2 opened with $128 million two summers ago compared to the first film's $100 million 3.5-day opening, so something went right. I'm sure Warner Bros. would be thrilled with a similar 28% jump in opening weekend grosses, which would net Sherlock Holmes: A Game of Shadows $79 million over its first three days.  It will be interesting to see if Warner Bros. cuts a second trailer between now and December, and if so if they find a way to sell Moriarty to a mass audience.

They somehow made Jude Law look a little Asian....