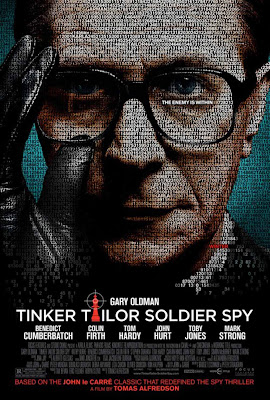 Tomas Alfredson so badly wants to concoct a 1970s-style thriller that it would be laughable if the final product weren't so darn good.  From the somewhat hazy cinematography to the John Barry-ish score to the overtly cold and clinical nature of the narrative, this is a film that (appropriately) wants to take us back to what many consider to the peak of mainstream adult filmmaking.  What makes the picture work as more than just an acting-treat or period-homage is the undertone of impotence and irrelevance that makes the film into a grand tragedy.  By retaining the 1970s setting, Alfredson makes potent commentary about the futile and possibly irrelevant nature of modern espionage.  Point being, forty years later, none of the secrets that were fought over mean a damn thing anymore.

A token amount of plot: Following a botched operation in Hungary that caused collateral damage, Control, the current head of the British Intelligence Agency (John Hurt) is forced out along with fellow high level operative George Smiley (Gary Oldman).  But Control still believes that the original intent of the mission, to feret out a possible mole at the very top of the 'Circus', is still relevant, so Smiley is brought out of retirement to finish the work his supervisor could not.  That's all you need and that's all you get.  What follows is a low-key but endlessly gripping mole-hunt, which involves a token look at how the information game was operated a few decades ago.  But most importantly, Oldman's pursuit brings him into contact with a parade of notable character actors, all of whom deliver superb performances of varying degrees of emotionalism.

I'm not going to run down each actor and the role they play, but instead I will merely state that the film stars (deep breath) Gary Oldman, John Hurt, Mark Strong, Colin Firth, Tom Hardy, Toby Jones, Benedict Cumberbatch, and Ciarán Hinds.  Without going into details, some of these actors play to type (John Hurt passionately pontificates!) and some go off their respective beaten path (Tom Hardy and Mark Strong are surprisingly vulnerable), but everyone brings their A game.   Everyone excels, but special note should be made of Kathy Burke, who delivers real pathos during her big scene with Oldman and shines in an otherwise male-dominated line-up.  Oldman himself delivers a strong lead performance, as his unexpected cockiness reveals a confidence in his work which is balanced by his obvious regrets.  It is absurd that Gary Oldman has never received an Oscar nomination, but I fear this low-key and mostly buttoned-down star turn won't feel 'big' enough for the Academy.

Aside from the parade of thespians and the procedural details of the hunt, the picture paints a grim picture of both the nature and the relevance of the 'spy vs. spy' game.  It is not the first film to openly question the broad point of seemingly arbitrary intelligence peddling (even more commercial pictures like Goldeneye, Mission: Impossible, and The Bourne Identity play with similar themes), but the period setting lends it a surprising topicality.  While it has a surface-level 'see how little its changed?' overtone, the picture soberly asks if any of it really matters.  When an antagonist states near the end that he's 'made a mark', it brings the stark realization that those who do evil are noticed while those who prevent evil do so in shadows.  The film acknowledges that these men have given their whole lives basically protecting or pursuing arbitrary pieces of information that mean little in the grander picture.  Again, not new ideas (I can only presume they represent the opinions of author John le Carre), but they give the film a potency behind its worth as a procedural acting treat.

Tinker, Tailor, Soldier, Spy takes a trip into the past to show how little has changed and how little we notice the day-to-day effects of the espionage game.  It is a fine thriller and a powerful piece of pop entertainment.  Aside from the wonderful star turn by Gary Oldman and the host of other performances, the movie matters by acknowledging the futility of its world.

Grade: A-
.
.
.
.
.
.
.
.
SPOILER SPOILER END OF MOVIE COMPLAINT SPOILER!!!
NOTE (highlight to read)-  The one BIG problem I had with the film, the main reason I didn't give it an "A", is how it handles the identity of the mole.  Put simply, there is one actor who is just a little more famous than the others, yet has little or nothing to do for the majority of the film.  As such, anyone who has watched enough television crime procedurals can guess the identity of the villain in about five minutes.  The film goes by several 'catch the killer' tropes, including 'The Law of Inexplicably High Billing' and "The Law of the Seemingly Needless Character Played By An Actor Who Doesn't Play Needless Characters".  Fortunately, the journey is more important than the destination, I just wish the filmmakers hadn't cast such a major actor in such an otherwise useless role, thus giving away the game right off the bat.
Posted by Scott Mendelson at 1:16 PM

I like the espionage-y way that you wrote the potential spoiler. Great review as always. What happened with the Huffington Post? I don't mind coming here to read your reviews but it took less work when it was just part of my standard HuffPo browsing.

I still publish there, but I always put my stuff here first A) because this is my blog where EVERYTHING goes and B) Huff Post no longer allows writers to edit posts after publication. Hence, if I'm going to make any typos or the like, I want to do them here so readers can catch them in time for correction. This review will go on Huff Post early next week. But in the meantime, bookmark Mendelson's Memos for everything I write.

I saw this film recently, after trying a couple of times and sleeping off(and I have discovered some great films this way, so it is a good thing in my defense). I had to companion it with Page Eight which finished faster in comparison, and was a fairly light watch with Bill Nighy and other inoffensive excuses for a spy thriller. Coming back to T2S2, it is a scotch glass in hand watch, much like Moneyball but far better in terms of cast and depth and whatnot. Some great technique(in fact the best I have seen this year) and performances and the spy theme make it a tougher than ordinary thriller(think Ghost Writer).