Review: Chronicle (2012) is a compelling character drama, a visual dazzler, and a thoughtful deconstruction of the 'chosen hero' myth. 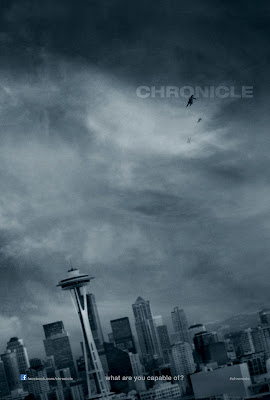 I've written a lot over the last couple years about how, if superhero films are going to survive, they are going to have to be able to be about something other than the generic tropes of superhero comic book adventures.  Captain America excelled because it was a World War II period action drama, while Green Lantern mostly faltered because it wasn't about anything other than its own conventions.  Chronicle (written by Max Landis and directed by Josh Trank) is a shining example of a powerful emotional tragedy that involves certain comic book conventions without really being about them.  At heart, the picture is a fierce rebuttal of the now-cliche 'with great power comes a superior destiny' motif that has been central to the last ten years of big-budget fantasy pictures, both those based on comics and those based on young-adult fantasy novels.  More than just a deconstruction of fantasy tropes, Chronicle is a thoughtful and empathetic story of  three disparate teens who end up with special powers and how it does or does not change them.

Although it is an unofficial member of the 'found footage' school, it uses that oft-derided format to its advantage, bringing intimacy and realism to the forefront (it helps that the film looks visually engaging and has a bare minimum of 'shaky cam' effect).  While this may be damning with faint praise, Chronicle is arguably the best 'found footage' film yet made, using the technique to make its special effects feel truly special.  It also contains the truest and most compelling variation on the that classic 'they discover they have powers' concept, feeling absolutely authentic as the three young men explore their new found abilities in not very heroic ways (my favorite involves playing that prank in a toy store that you've always dreamed of doing...).  This experimentation phase culminates in a soaring bit of action and special effects that feels far more real than any number of $100-200 million franchise pictures that have tried the same effect.  There is a plausibility to the effects work and to the scenarios being played out that renders them genuinely special and that-much more engaging.  It is one thing to believe your eyes when you're seeing practical stunt work.  It is another thing to absolutely believe your eyes when you're seeing something that cannot actually be real.

But the picture is more than just a demo reel of how to make cheap special effects look better than far-more expensive visuals.  The picture is a true character study, centering around the three young men who stumble upon what can only be described as 'super powers'.  The film's main point-of-view is young Andrew Detmer (Dane DeHaan), who initially begins filming in order to document the violent abuse of his drunken father and the medical suffering of his terminally-ill mother.  The two other main characters are Andrew's cousin Matt (Alex Russell) and Steve Montgomery (Michael B. Jordan), a popular and extroverted student who just happens to stumble upon the mysterious underground rock at the wrong time.  Everyone shines and everyone - supporting cast, cameo players, etc - give superb slice-of-life performances.  The screenplay gives the three leads so much depth that you realize about halfway in that Steve isn't just 'the token black guy', but a full-blown lead character in this drama.  The few female characters are pretty thin, but they are both accorded appropriate respect and not overused for the sake of having a pretty girl to put on the poster (Ashley Hinshaw does fine understated work as Matt's crush).

Where this story goes I will not reveal, only to say that it is just slightly disappointing that the film doesn't play around with certain formulas a bit more in the third act.  Once you figure out just what story is being told, you can pretty-well map out what will transpire.  But the telling is solid, with Trank and Landis confidently bringing their story to its inevitable conclusion even as we hope for a different outcome.  What works in a narrative sense is the refusal to paint an arc for each major character in a conventional sense.  Andrew and Matt don't change all that much throughout the film, while Steve merely opens up a bit as he finds himself socializing with people far outside his usual peer group.

Also giving the story an added gravitas is the fact that the majority of the school is not made up of bullies and would-be enemies.  When Andrew gets a brief moment of social acceptance, it feels real because it IS real.  Most of the kids in this film are relatively decent people, which adds a level of pathos as we realize that Andrew has been self-ostracized and beaten-down by his father for so long that he doesn't know how to deal with something resembling friendship.  This isn't a case of Anakin Skywalker going to the dark side because none of the Jedi bothered to intervene, or a case of Carrie White being endlessly tormented until she exploded in a fiery rage.  Chances are missed and the wrong things are occasionally said, but there is potential for a happy ending, although I will not reveal if one actually occurs.

When a genre becomes old enough or repeated often enough, the tropes become so familiar that the deconstructions become more engaging and entertaining than the real thing.  When film critics discuss their favorite westerns, it is usually films like The Searchers, Lonesome Dove, and Unforgiven that get heralded above the others.  By looking at the genre motifs with a somewhat clinical eye, it is that much easier to find profundities within the genre trappings while both being of and standing apart from that genre.  Chronicle attempts something even trickier, which is to examine the messages and ideologies of the super-hero drama without actually existing in said genre, while telling a fantastical story in an absolutely relatable and plausible fashion.  It is not a super hero picture in any conventional sense, but it has an awful lot to say about them.

awesome. this really makes me want to see it

I would argue that the found footage aspect of the film is where the film falters the most. At times, if the film would've dropped that aspect and gone the more traditional route, this would've been a masterwork.

As it stands, it's very, very good with what it does and wants to accomplish.

And while, yes, it feels like a deconstruction of the genre (hello, Unbreakable's cousin), to me, this felt more like Akira than anything else. I mean, if you've seen the anime, this is basically a stripped down version of it but with the same emotional intensity and power. Looks like WB's lost out on that one.

I will say that it did not help to see the Avengers trailer and then watch this film afterwords one bit. Is it me or does the Avengers feel and look cheap?

Between this, Haywire, and the Grey, these first two months of the year is making it difficult for the summer fare. They have a lot to live up to.

"Andrew and Matt doesn't change" should be changed to "don't"

I didn't want to get snarky about it, but my thought during the second act was basically 'well, this movie just killed The Amazing Spider-Man'. Sony has been screaming about how their new reboot will be a "stripped-down, character-centric, dark/gritty" look at a young man who finds out he has special powers. Hmm... whoops (never mind that the Raimi films were completely character-centric around the Peter Parker/Mary Jane romance). Yes, The Avengers, of what we've seen so far, does look a bit small in scale and/or 'cheap'. On the other hand, John Carter is starting to actually look 'epic', but still looks terrible and badly acted.

Considering that I didn't like Raimi's trilogy all that much, I'm still looking forward to this reboot...even if I do agree with your assessment of what the success of the film would do to the industry.

I have high hopes that I won't be crushed as I was back in May of '02. Worse theatrical experience of my life, that first Spider-Man film.