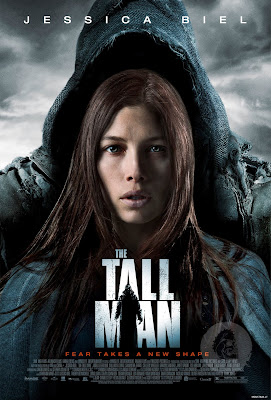 At its best, writer/director Pascal Laugier's The Tall Man is an examination of our expectations when it comes to the horror genre.  It almost playfully plays with our knowledge of the cliches and the templates, telling what seems to be a conventional story while  slowly pulling the rug out from under us.  While the picture is not a complete success, and while it intrigues and unnerves more than it explicitly frightens, it earns points for telling a story right up to its climax.  This is not a film that runs out of narrative by the 2/3 mark and descends into an action sequence or a violent spectacle, but rather a slow-burn drama that holds some of its cards as long as possible.  It's a cliche/generic pull-quote to say that a movie 'keeps you guessing to the end', but it applies in this case (as an objective fact more so than an exclamation).


There is very little plot that I'd feel comfortable revealing, so this will be brief.  In the small town of Cold Rock, the citizens have been caught in a grip of fear over the legendary Tall Man.  Just who is the Tall Man?  No one knows, but he has a habit of regularly abducting the children of this quiet community, with nary a trace found nor a clue left in his wake.  The film centers around Julia Denning (Jessica Biel), a young nurse who is raising a young child by herself following the death of her husband several years prior.  Needless to say it's only a matter of time before her son is snatched up in the night, sending Julia on a fierce pursuit that will reveal terrible secrets that affect not only Julia, but the theoretical Tall Man and the entire town of Cold Rock.

That's all you need so that's all you get.  Laugier's canniest move is to cast Jessica Biel and show her as a loving mother right from the get-go.  We know that Ms. Biel is a big movie star and that a mother in pursuit of her missing child is one of the oldest stories around.  So we have a pretty good idea of where we think this movie is going, but all I will say is that it's a little more complicated.  As we get information that both comes from unreliable sources and contradict what we know about storytelling conventions, we aren't quite sure what to believe or who is telling the truth until around the third act of the picture.  While Laugier's Martyrs played with conventions as well, this one is arguably more successful if only because this picture doesn't have the luxury of distracting us with astonishingly graphic violence and horrifying imagery.  The Tall Man is more of a mystery than a straight-up horror film, so its effectiveness is dependent on acting and mood.  Biel is quite good here, and it's disheartening to realize that she'd likely never get a role this solid in a more mainstream production.  Stephen McHattie, Samantha Ferris, Jodelle Ferland, and William B. Davis all add a certain gravitas to the proceedings, and the picture captures a vivid small-town environment in a way only horror films seem capable of.

The film's biggest issues involve the final act, where the film comes to a natural conclusion but still progresses for a good fifteen minutes which only further to muddy up the film's moral waters.  To say more would risk giving too much away, so I'll only state that what story there is left to tell, if it indeed must be told, should have been wrapped up in a more streamlined fashion.  Nonetheless, The Tall Man is a disconcerting and engaging chiller, with strong performances and a genuinely authentic sense of time and place.  The final reel will surely get people talking and the journey to said final reel is a bit of engaging slow-burn storytelling that knows which cards to hide and which to show.  I wish the film concentrated a bit more on the psychological effects of an entire town slowly being stripped of their offspring, but that's more in the 'film I wanted to see' category.  In terms of telling the story it chooses to tell, The Tall Man just plain works.

Just rented this on VOD and I'm still trying to process this film. I have no freaking idea if it works but it's subtext chilled me to the bone. Watching this and Detachment would make for a great double bill.


I think that this film will be in my top ten of the year and again, I don't know if the film truly works. But damn it, I admire it's intentions and the way it goes about it.


Biel is wonderful in this film. Best performance of her career by a mile.

The movie left me thinking. It works for me and adds so many thoughts and questions about society.
Also your picture makes you look like a freaking pedophile... that was disturbing to see on a review page for a movie about child abductions.