Brandon Peters dissects the 007 series part 05: You Only Live Twice 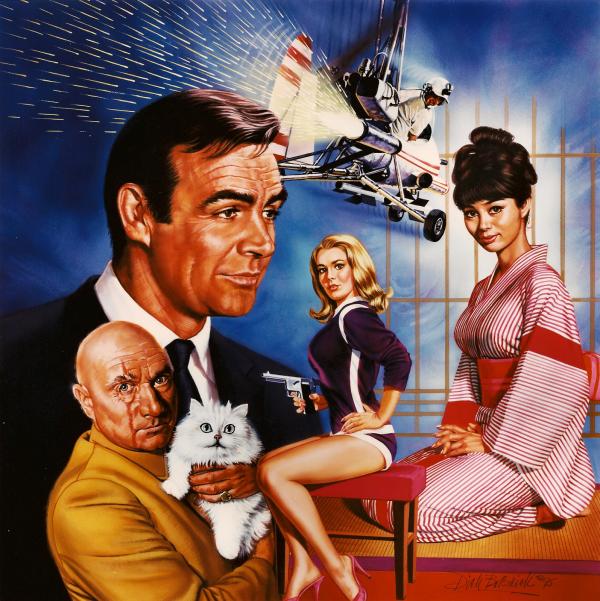 With Skyfall dropping in theaters in just a few months, along with the 50th anniversary of the James Bond series, a close friend and fellow film nerd, Brandon Peters, has generously offered to do a comprehensive review of the entire 007 film franchise. Today is the fifth entry, covering the 007 film that inspired a thousand parodies, You Only Live Twice. I hope you enjoy what is a pretty massive feature leading up the November 9th release of Skyfall. I'll do my best to leave my two-cents out of it, give or take a few items I have up my sleeve (including a guest review from my wife as she sings the praises of her favorite 007 film, you won't believe what it is). But just because I'm stepping aside doesn't mean you should, as I can only hope for robust discussions in the comments section. Without further ado...

It won't be the nicotine that kills you, Mr. Bond.
~Ernst Stavro Blofeld

STATS
Kills: 14
Bond Girls: Helga Brandt, Aki, Kissy Suzuki
Car: 2000GT (Bond never drives in this film, however)
Locales:
Odd Henchman Trait: Blofeld has a scar on his face over his eye.  Hans is Donald Grant-light.  Tall big and blonde, but with no substance.
Song:  “You Only Live Twice” performed by Nancy Sinatra

Sean Connery returns for the first of three “final” appearances as James Bond-007.  You Only Live Twice is the Bond film that would become the subject of much parody in the years following.  The second half the film takes the franchise to some of its most campy, over the top and outrageous moments in the series history.  It wouldn’t be the only film to do so, but it’s only fair to blame it for laying the groundwork.  SPECTRE is trying to forge a war between the & by stealing their spacecrafts mid orbit.  The sides are growing testy and on the brink.  The believes something else to be afoot when intelligence arrives about the mystery spacecraft, that has swallowed the and Soviet crafts, landing in .  MI:6 sends James Bond (who has recently faked his death) to to discover the real source of this crisis.  In , Bond becomes Japanese, trains and becomes a ninja, leads full on attack of SPECTRE’s volcanic launching station, and finally comes face to face with SPECTRE Agent #1.

During production, Sean Connery announced his retirement from the role of James Bond.  And who could blame him?  YOLT was his 5th Bond film in 6 years.  With shooting schedules and going out to do publicity for each film there is little, if no, time for any other projects.  His performance doesn’t lack here as you might assume with this knowledge.  He’s fully committed and gives a solid run in what he thought was, and what should’ve been, his last outing.  And my-oh-my is he almost a hulking giant over his supporting cast in this film.

This venture into Japanese culture proves an embarrassment in the modern age in this “Bond-san” tale.  One can either take it and laugh or scoff in disgust.  Most of the Japanese characters are played with negative stereotypes.  It kind of falls in line with how they were viewed in most films back then.  There are a lot of remarks and things that are made to look like important parts of the culture, but play more as a foreigner’s view of and its culture instead.  It’s always Japanese this or Japanese that.  How’s this for Japanese such and such.  There is also some really bad sexism in the film, especially regarding a scene in a bath house.  007’s correspondent Tiger Tanaka (Tetsuro Tamba), head of the Japanese secret service, tells James Bond that “In , men come first women come second.” To which Bond enlightens “I just might retire here”.  There’s plenty more (in this scene alone), but it’s so obscene one might get a giggle out of how out of touch it is.

Aside from the blatant racism/sexism, the first half of the film is pretty damn good.  I have no idea where James Bond faking his death proves of any relevance (note: it’s also the second time in the teaser we’ve been duped by a fake 007 death).  It does help to give us, finally, in the *fifth* film, a James Bond who actually goes under a false identity while on the case (“Mr. Fisher”).  We are treated to some fist fights, a shootout, a car chase, a foot chase, a plane crash and a gyrocopter battle in the first hour of the film.  It’s pretty exciting.  Some of the mission doesn’t work in putting things together, but the movie is moving at a fast pace that I’m willing to let things happen to get us from point A to point B.

The entire 007 series takes a big turn in the second hour of the film.  The moment?  The scene when James Bond on a secret island asks Tiger Tanaka if he has commandos.  “I have much, much better. Ninjas. Top-secret, Bond-san. This is my ninja training school.”  The film steers out of control from here.  Bond is told he also needs to 1) become Japanese and 2) become a ninja in just a matter of a couple days if he is to leave the island and take on SPECTRE.  Bond becoming Japanese is insanely laughable as he just gets a new haircut (toupee) and some bigger eyebrows.  His speech also sounds entirely like a Scotsman speaking Japanese.  And, to become a fully trained ninja in a couple days?  Okay, sure.  Yes, this is really bad. But at this point, you really just need to suck it up.  The final battle inside the volcanic SPECTRE base is outrageous and over the top.  Here you have a ton of explosions, shootouts and ninjas doing battle with uniformed SPECTRE henchman.  Guys are jumping off trampolines from explosions, guns are firing everywhere, ninjas are dropping down from ropes.  It is batshit crazy.  And you really just have to enjoy it.

We finally learn the identity of SPECTRE agent #1.  He introduces himself as Ernst Stavro Blofeld.  Due to the opening credits, you’re already ruined as who is playing him before the big reveal.  As a huge fan of the Halloween franchise, when I see the name “Donald Pleasance” in the opening credits, I’m going to be excited.  And when 80 minutes go by and I have yet to see him, I’m pretty sure he’s going to be the guy stroking the cat (aside from the familiarity of his voice).  That’s how it played for me when I first saw this in my youth.  Donald Pleasance’s Blofeld is rather strange and uniquely creepy.  I really don’t think we’re given enough time with him revealed, but while he is on screen the character is very unpredictable.  For finally getting the man behind the curtain, it’s rather weak, but it plays into the film’s overall camp factor.

This is the film that is primary focus of parody for the Austin Powers franchise.  It takes full advantage of the enemy base, the henchman, the vehicles and the space.  Not to mention the series’ villain, Dr. Evil, is a straight parody, in appearance, of Donald Pleasance’s Blofeld.  I’m sure many others would parody this film, but nothing did it quite as well, and with as much recognition as Austin Powers.  You Only Live Twice is definitely the weakest film of the franchise at this juncture.  However, it would not be Connery’s worst.  Still, the first hour is really solid and the shear camp entertainment value of the finale is pretty high (especially if you can overlook the racist/sexist dialogue).  This should have been Sean Connery’s swan song as 007.

Brandon Peters will return in On Her Majesty’s Secret Service (for real this time!)