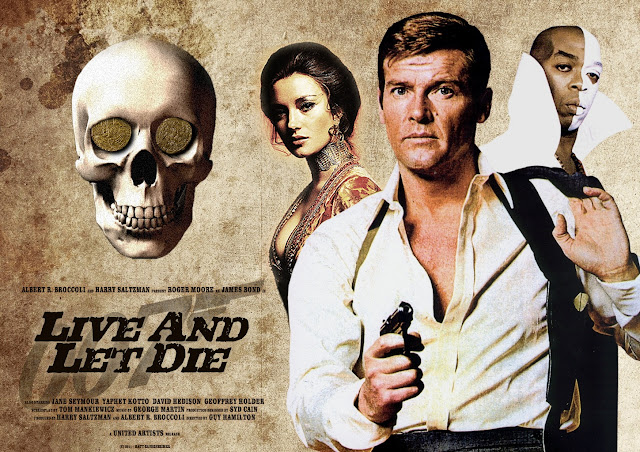 With Skyfall dropping in theaters in just a few months, along with the 50th anniversary of the James Bond series, a close friend and fellow film nerd, Brandon Peters, has generously offered to do a comprehensive review of the entire 007 film franchise. Today is the eigth entry, with a full review at one of Roger Moore's debut entry, Live and Let Die. I hope you enjoy what is a pretty massive feature leading up the November 9th release of Skyfall. I'll do my best to leave my two-cents out of it, give or take a few items I have up my sleeve (including a guest review from my wife as she sings the praises of her favorite 007 film, you won't believe what it is). But just because I'm stepping aside doesn't mean you should, as I can only hope for robust discussions in the comments section. Without further ado...

Names is for tombstones, baby! Y'all take this honkey out and WASTE HIM! NOW!
~Mr. Big (Dr. Kananga)

STATS
Kills: 8 + 1 snake (I’ve always LOVED this.  While smoking a cigar in the bathroom, Bond takes a hair spray bottle and sprays it at the cigar creating a flame thrower to kill the snake)
Bond Girls:  Solitaire, Rosie Carver, Miss Caruso
Car:  Bond drives a double decker bus and a speed boat in this one, no car
Locales:  Harlem, , San Monique (fictional)
Odd Villain Trait:  Tee Hee has a mechanical arm, Whisper is obese and speaks in…yes a whisper, Baron Samedi involved in the voodoo occult
Song:  “Live and Let Die” performed by Wings (that’s Paul McCartney’s ‘other’ band for those who don’t know)

Live and Let Die starts the seven-film run of Roger Moore as 007.  ’s first adventure, and Eon’s eighth,   attempts to showcase as a different Bond.  This film takes the franchise and alters the stakes by playing in another genre’s sandbox.  Guy Hamilton returns for his third outing, yet the film is quite different from his previous work in the 007 series until close to the finale.  The film packs plenty of action sequences, but frankly feels a little long.  Three MI:6 agents monitoring the operations of a small island dictator (Dr. Kananga played by Yaphet Kotto)  are mysteriously killed in a 24-hour period.   James Bond is sent to to contact with Felix Leiter (David Hedison) and investigate the first murder.  The investigation leads to a connection between a drug dealer, Mr. Big (also Yaphet Kotto), and .  Bond’s investigations team him up with Quarrel’s (from Dr. No) son taking him from the streets of New Orleans to the island of San Monique where Bond is immersed in a world of voodoo, bayous, tarot and drugs.

Live and Let Die is the first time the 007 series has stepped outside its comfort zone and borrowed from another genre.  Not only is it an interesting choice, but it was the right one at the right time.  Live and Let Die was decided as the next film during the shooting of Diamonds are Forever.  With much of the story taking place in Harlem and , it made for the perfect opportunity to tell this story as a ‘James Bond meets Blaxploitation’ film.  At the time this film was made, films like Shaft and Superfly were on the rise.  All the supporting cast, down to the “honkies” Felix Leiter and Sheriff J.W. Pepper (Clifton James) feel like they were lifted from a Shaft sequel.  The structure of the action scenes that take place in feel very much inspired by them as well.  Just the overall film stock of this film looks Blaxploitation.  The Bond theme and the score has even been completely funk-induced to sell the vibe even more.  As a fan of the genre, I’d argue that this film was done in appreciation and as a homage to the genre and never saw  any of it as offensive or a mockery.  On top of that, I don’t think the choice to make the film this way is out of fear of these other films dethroning Bond.  It makes for a quite unique film eight entries in.  In a nice turn at the end, Tee Hee (Julius Harris) slips aboard Bond’s train car to try and take him out, via a callback to From Russia with Love.  It’s a nice way of kind of turning the tables, sending Bond back to his world and having a character from the Blaxploitation world enter his.

Roger Moore’s first turn as Bond seems a bit tight and cautious.  Consciously, he was trying to not be Sean Connery and also not reminiscent of his character from the television series The Saint.  His performance is fine, but you can see he’s not quite as comfortable in the role yet.  He does appear quite comfortable delivering Bond’s famous quips.  The way spouts them out seems natural, honest and doesn’t make you groan or take you out of the scene.  Some were actually pretty funny.  His performance isn’t quite as dazzling as Connery in Dr. No, but gives you the sense that “Hey, I think things are going to be ok with this guy”.

While it’s the same Bond character, there are little things thrown at you throughout to set apart from Connery (aside from the fact he’s a different actor).  Bond orders bourbon, he doesn’t wear a hat and swaps out his Walther PPK for a Magnum in the final battle.  He’s also dressed much more colorful and stylish in this film.  All these things are a bit silly because they still don’t hide the fact this script was obviously written for Sean Connery to play the role.  For example, there’s some threatening of women that looks a little awkward doing, but I’d have no problem seeing Connery pull it off.  Connery was asked back for $5.2 million, but he refused claiming he’d “never” play Bond again.  Some bizarre choices like Clint Eastwood and Burt Reynolds were in consideration to take over the role, but essentially everyone agreed they wanted Moore (who had been discussed in preproduction for Dr. No and On Her Majesty’s Secret Service for 007, but never was spoken to about the role).  And to all the folks who aren’t fans of his Bond portrayal, for Live and Let Die it could have been disastrous had they not gone with him.

Bond’s nemesis this time around isn’t trying to destroy any part of the world this time.  He isn’t trying to become a global leader or pit countries against each other.  Dr. Kananga just wants to be THE heroin kingpin of the and make a ton of money doing so.  He has cast a voodoo scare in the area of his heroin fields and is doubling as an American drug lord in hopes of monopolizing the heroin industry.  He’s frankly rather a snoozer of a villain.  He’s a bit too calm and doesn’t feel much of a threat.  His henchmen are far more colorful and interesting.  While he’s more boisterous as Mr. Big, he just looks so weird in the face from the get go, you pretty much know his face can’t be real.  I give him credit for straying from the norm, but he’s just not very enjoyable of a presence on screen.  And it’s surprising, because Yaphet Kotto can be a pretty compelling actor elsewhere.

While Tiffany Case proved rather useless in the last film, she was nowhere near as ridiculous or obnoxious as Rosie Carver (Gloria Hendry) in this film.  I could not wait for this girl to be off’ed.  She’s a CIA double agent working for Dr. Kananga.  At every possible point in her appearance she’s given the opportunity to look extremely dumb.  This woman is a fully trained CIA agent screaming like a 5 year old and frightened to death at a dead snake.  Then, just a minute later, is screaming again at a hat in the bedroom.  She then looks stupid as she attempts to take out Bond’s partner Quarrel Jr.  She is so annoying and so pointless, her character and part of the story should have been cut entirely.  I know this is the first black girl Bond has bedded, but she’s an absolute waste of time and an embarrassment as a character.

Jane Seymour’s Solitaire is a far better character.  By the way, does this woman age?  She’s 62 and still looks great.  Anyway, Solitaire brings a bit of a supernatural touch the 007.  She is a tarot reader able to be steps ahead and call Bond’s every move before it happens.  She is vital to and how he keeps a leg up.  She gets to wear some extravagant costumes and makeup in the film making her pretty memorable.  However, Poonraker strikes again as after she sleeps with 007, she loses her power and then becomes just another Bond and a damsel in distress.  But, its Jane Seymour, I’ll allow it.

While Live and Let Die boasts some really cool and unique action sequences throughout, the picture is a bit long.  A lot of this movie could have been tightened up.  It might have added a little more suspense as well.  All of Rosier Carver’s stuff should have been cut.  The boat chase could have been trimmed down (it’s terrific, but at times it feels like you’re just watching boats drive with nothing happening), the grounded airplane chase provides some laughs, but is unnecessary.  And for all the gritty real action sequences, the end and ’s death feel a bit cartoon-ish and out of place (the only place in the film where it is clear Guy Hamilton directed it).  Somewhere in the hour and a half to hour 40 mark this film started to feel kind of long.  This could have been one of the best Bond films with a 105-minute running time.

Live and Let Die marks a fine debut for Roger Moore.  Following the dreadful Diamonds are Forever, it’s a refreshing step into something new to introduce a new era of James Bond.  It’s a bit overlong and has a couple annoyances, but is definitely worth the watch.  If you’re not familiar with the Blaxploitation genre of film, you may not find an appreciation for it or “get” what the filmmakers are going for*.  This film is probably known best for its title song now-a-days more than its actual content.  This was a favorite of mine growing up, and while my fondness may or may not be the same (not telling  yet), it’s worth a venture if you’re curious.

Brandon Peters will return in The Man with the Golden Gun