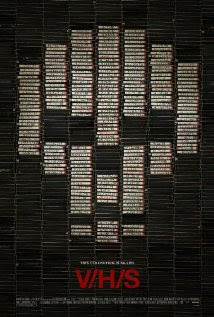 Regular 007 retrospective author Brandon Peters slipped me a review of the new horror anthology feature V/H/S.  I've seen the film as well, and I pretty much agree with what Mr. Peters has to say, so I'm sharing his review.

A found footage movie from guys who don’t like found footage movies.  That was the selling point of recent festival darling V/H/S.  Six up and coming horror directors come together for a horror anthology told in the found footage aesthetic.  While the film does provide creativity, genuine scares and disturbances, it proves overly long and a bit monotonous.

The general story surrounding V/H/S is of a group of Jackass-like guys who film vandalism and molestation of women and sell the tapes on the internet.  One has a job for them to go into an old man’s house and retrieve a specific VHS tape.  Upon arriving at the house, they find the man dead in front of a set of monitors and VCRs.  As others search for the tapes in the basement, one of the group watches the tape already in the VCR.  We are shown the shorts through this, as each time someone watches one they disappear by the end and another one shows up to put the tape in and press play.

There’s some creativity to “how” the found footage shorts are taped.  The first is through a pair of glasses with a camera built into them.  It’s about a few college age guys wanting to try them out and make a sex tape.  The second is your normal camcorder tale. A couple on their second honeymoon is eerily followed by an unknown assailant.  This is probably the most steadily shot of the films, for those of you with the weak stomachs.  The third is a slasher-esque tale told through a shaky camcorder.  The fourth segment is told through a series of haunting web chats.  Finally a man dressed a nanny-cam (teddy bear with a camera in it) is how we finish out the film.  A group of friends go to a Halloween party at a seemingly empty house.

Its not too often we see many horror anthology films.  I can only recall two in the last so-ever-many years; the overhyped but charming Trick R’ Treat and the oversexed Little Deaths.  VHS seems to fall somewhere inbetween those two films in terms of its horror.  And it doesn’t hold back on its bloodshed or disturbance.  It’s not afraid to “go there”.  Aside from one of the shorts (“Tuesday the 17th”), everything seems to be handled with care.  Our many story we keep returning to is a little wonky but it works.  There’s plenty of blood and disturbing imagery to satisfy everyone.  Some of the stories could use a little more time for development than they are given.  The same can be said for ones that are given too much allotment and not doing anything with it.

The biggest problem with V/H/S is the length.  Its two hours.  Most movies in the found footage genre are barely long enough to be considered a feature length film, relying on big font, slow moving credits to fill out the runtime.  One to two of these shorts could have been cut and the film would not lose anything.  Also, the first story could have been trimmed down and still worked and maybe better.   Found footage movies have this way of similarly starting off and telling their tales.  With having to act “real” you’re severely handicapped by simple storytelling conventions.  And it gets kind of repetitive by the third story.  And the third happens to be the weakest piece.  It’s followed by the fourth one, while very creepy, ends confusingly.  The final story is quite, but by the time we get there, I was ready for the film to be done 15 minutes prior.

Another problem is finding characters that strike a cord with the viewer.  The main story features none of that.  While the first short features an insanely accurate portrayal of young guys getting hammered on a night out, it definitely feels like you’re the sober guy stuck carting these guys around.  The final story features some decent guys, but it’s a bit late for me to care about anything during that time as I was in more of a “get to it, please” manner.  There’s one whole decent, respectable female character in the entire film (“Second Honeymoon”).  The others serve to show their boobs are get dispensed of in a graphic fashion.

I’m not a found footage fanatic.  I have seen a few I’ve liked.  But for the most part I am not a fan of the genre.  If you’re not, V/H/S is not going to change your mindset.  If you’re looking for some good horror, regardless of its length, V/H/S does deliver.  In a weird way, it’s got something for both those who enjoy suspense and those who love the gore.  I applaud the ambition and attempt, but in the end, the film shouldn’t have taken up the whole SP video cassette.

I'd like to clear something up. I rather liked the payoff of the first story. Its probably the best payoff of the entire film. I just feel it could've gotten to it a tad quicker.

that's fair. I really dug the second honeymoon story the most, even if it ends fairly abruptly. I liked the slow build.

I'm a big big fan of Ti West (I've been recommending House of the Devil to exhaustive lengths for the last couple years), but I was slightly disappointed by that one. Still enjoyable though. Unlike the rest, it felt hampered by its time constraint. I didn't feel there was enough there. The finish kind of came off forced. Needed some more detail and build. More slow burn.