Marc Webb will helm Spectacular Spider-Man after all! Thoughts and speculation on his somewhat surprising return. 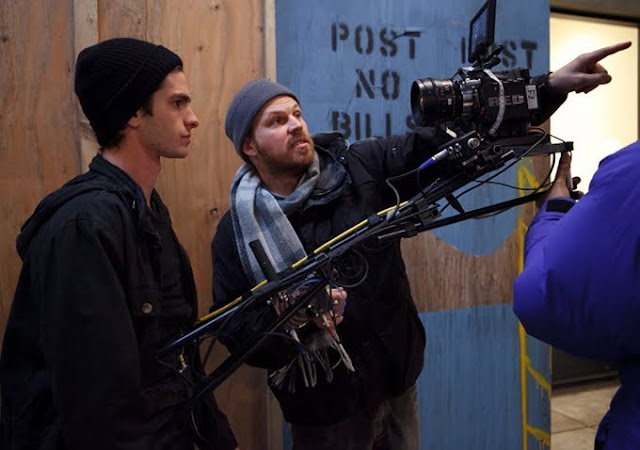 It's a telling sign of behind-the-scenes tumult when it's actually surprising to hear that the director of a franchise-kick off is indeed returning to helm the sequel.  But after a summer filled with innuendo and rumors, followed by a final product that was clearly cut to ribbons at the last minute, and I am not a little surprised to see Marc Webb signing up for another go at Spider-Man 2.0.  But The Hollywood Reporter uh, reports that Webb will indeed helm The Spectacular Spider-Man, set for release on May 4th, 2014.  Andrew Garfield is back too, which is obviously less of a surprise, but at this point Emma Stone is still negotiating.  Expect Stone to get a massive raise, perhaps higher than Garfield, as her massive charisma and general attractiveness caused audiences and critics worldwide to convince themselves that the paper-thin romantic subplot was some kind of classic genre romance.  Webb is angling for a raise above the $1 million he got last time.  Purely speculating, but I imagine Sony offered him enough money to stick around under what will likely be rigorous studio control so they could save face for at least one more installment.  Losing the director after two installments is par for the course (Batman Forever, Iron Man 3, Harry Potter and the Prisoner of Azkaban, X-Men: The Last Stand, Shrek the Third, Chronicle of Narnia: Voyage of the Dawn Treader, etc.) but losing the director after one film generally causes raised eyebrows.  In this case it would be an admission of error.

As you all know, Sony was allegedly not happy with the film Webb delivered and they went ahead and hired two uber-blockbuster screenwriters (Roberto Orci and Alex Kurtzman of Transformers and Star Trek fame) before the first film even came out.  And as we all know, huge chunks of what was seemingly the core narrative of the film (Peter Parker's "untold story" involving Doc Connor's connection to Peter's dead/missing parents) ended up proudly displayed in the marketing but removed from the theatrical cut.  What was left was a watered-down, generic remake of Sam Raimi's first Spider-Man.  The brand name was strong enough to overcome deja vu, if just barely.  The film made $260 million in America, well-below the $337 million gross of Spider-Man 3, and $755 million worldwide, just below the $784 million global haul of Spider-Man 2.  No small potatoes, but a franchise low on both ends for a film that A) cost $100 million more than Spider-Man, about the same as Spider-Man 2, and just $30 million less than Spider-Man 3 and B) had the ticket-price bump which comes with 3D, meaning it sold far less tickets than any prior Spidey flick.  Less money and far less anticipation to see what comes next means Sony and Webb have their work cut out for them this time around.  The Spectacular Spider-Man (I'd be shocked if they don't call it that) seems like a prime candidate for the "Tomb Raider trap".

That doesn't mean all hope is lost.  If the sequel can manage to somehow be better than the first and Sony has the patience to build towards a Sinister Six film down the line (*and* not race to throw Gwen Stacey off a bridge as quickly as they can), then this could all be worth it. But that has to be a long term goal and the series has to survive long enough to make it happen.  Finding a way for Andrew Garfield to cameo in The Avengers 2 would be a good start and I sincerely think it's worth Sony spending whatever money they have to in order to make that happen.  Anyway, for now Webb is back on board.  All I can say is that all involved parties should actually read Brian Michael Bendis's Ultimate Spider-Man books this time while also seriously studying the two-season Spectacular Spider-Man cartoon from which they borrowed the whole 'Gwen Stacey is a lab tech for Doc Connors' bit (which made sense on the show since it was a small family-run lab).  Those two Spidey adaptations basically succeeded in everything Webb and co tried and failed to do with The Amazing Spider-Man.  But yeah, Webb is back in the director's chair and best of luck to him.  What are your thoughts about the second Spider-Man 2.0?  What lessons can they learn from the first film?

I hated the movie since it didn't bring anything new or compelling to the table and yet had the audacity to claim that Sam Raimi's fantastic trilogy was somehow subpar! The romantic plot was gag-worthy, but I'm happy that Emma is getting a huge payday! I'm positive I won't be going to the theaters when whatever-Spiderman releases next.