Review: The Intouchables (2012) is a broad and simplistic 'American' race/class comedy, but in French. 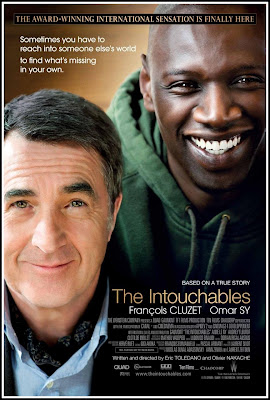 The Intouchables
2012
112 minutes
rated R
This film opens in limited release on May 25th.

I've written about this from time-to-time, but there is occasionally an odd effect that comes from labeling a film 'arthouse' or 'foreign' that gives it a certain critical allure. If Sucker Punch had been French, would critics have been more willing to plumb the film's social critiques?  If Drive had been released as is but as a major studio release with Hugh Jackman instead of a mid-level release with Ryan Gosling, would the critics have swooned to the same degree? Robert Rodriguez remarked nearly twenty years ago that the Spanish subtitles found in El Mariachi led critics to find copious symbolism in what was intended as a cheap exploitation picture.  And so it is that The Intouchables has become an international sensation, grossing $339 million overseas and becoming (I believe...) the most successful French export of all-time.  The mystique of subtitles and its obvious 'foreignness' has caused many to give a pass to what is as conventional, generic, and contrived a comedy as anything released by Adam Sandler or Eddie Murphy in these United States.

As a commentary on race, it is arguably the kind of movie many critics wrongly accused The Help of being.  But even ignoring the skin colors of its leading men (as writers and directors Olivier Nakache, Eric Toledano arguably wish us to), the film fails as a study of individual humanity, as both of its stars are presented as broadest and most cliched class-related stereotypes imaginable. Based on a true story, this light and explicitly frothy concoction concerns a relationship that develops between paralyzed aristocrat Phillipe (François Cluzet) and Driss (Omar Sy), the lower-class drifter who finds himself hired on as a caretaker.  There is no law saying that every film involving cross-racial relationships has to make some kind of defining statement about racism or race-relations in general, but there should be a rule against painting such broad character strokes using painfully obvious and patronizing stereotypes. If you read the above one-sentence plot synopsis and are now attempting to guess where the film goes, you'd be correct.

Upper-class Phillipe and lower-class Driss eventually warm to each other and their relationship blossoms into a mutually beneficial friendship.  But of course Driss has to be astonished by the upper class luxuries he encounters and baffled by 'upper-class culture' such as modern art and classical music.  Of course Phillipe has to learn to appreciate more modern music and/or to appreciate the little things.  Of course the street-smart Driss impresses everyone with a quasi hip-hop dance and teaches the stuffy Phillipe how to pick up chicks. Of course they bond over indulging in vices and condescendingly dealing with the women in their lives.  Even putting aside race for a moment, the cultural and socio-economic stereotypes at-play would make even Tyler Perry's worst films feel three-dimensional and culturally nuanced.

If one can put aside all of the societal implications of global audiences embracing such a condescending portrait filled with trite cliches and borderline offensive caricatures, one is still left with a dreadfully uninspired portrait filled with paint-by-numbers storytelling and paper-thin characters.  Even if one can find the possibility that the film is a metaphor for the idea that France will soon have to rely on its immigrants that it now treats with disdain, one is still left with a painfully broad and often sexist would-be comedy that would make have been torn to shreds and openly mocked had it been an American production with American movie stars.  Yes, Harvey Weinstein is planning a remake with Colin Firth and it will be interesting to see how its received.

As is, The Intouchables is not an evil film but a cheerfully ignorant one, whose commentary veers dangerously close to Bamboozled territory.  If anything, I cannot help but wonder if it is actually an attempt to create a comedy in the manner of how the world perceives American comedy.  It is no secret that the French perceives themselves as more culturally enlightened than we Americans, so the film can either be read as merely a boneheaded and self-aggrandizing portrait of two walking cliches that borders on racist and classist, or some kind of meta-commentary regarding how the French think the American public sees race and class relations.  Either way, The Intouchables is a pretty dreary film, something that would arguably all-the-more obvious without those pesky 'elitist subtitles'.

As for most succesfull french film export, i think it is the fifth element. it has earned over 200M outside France. (it would be about 230M to be more precise) Intouchables did "only" about 170M yet.

On the other hand, Intouchables are now the most grossing non-us film worldwide. (they have over run spirited away with 270M)