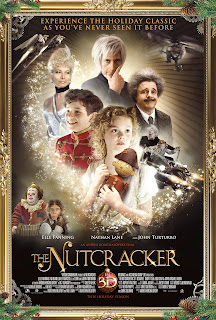 The Nutcracker 3D
2010
105 minutes
rated PG
Opens Wednesday, November 24th in select theaters.
by Scott Mendelson
The Nutcracker 3D is one of the strangest cocktails I've seen in a long time. It's technically a kids adventure story, yet it eventually becomes, of all things, a striking Holocaust parable. Yet during the shockingly vivid second act, the film still finds time to deal with a Peter Pan-like subplot about how adults eventually outgrow their childish pursuits. The problem with the film is not-so-much that it's bad (it's not), but that I have no idea what audience it was made for.

The first act of the story follows what I presume is a pretty traditional Nutcracker story (it's been ages since I saw the play, I was actually one of the Sugerplum Fairies in Kindergarten). It's 1920s Vienna and Young Mary (Elle Fanning) lives with her brother Max (Aaron Michael Drozin) in a house filled with everything but friends. Their parents (Richard E. Grant and Yuliya Vysotskaya) have left them on Christmas night, heading off to a social function and leaving them in the care of their charming and eccentric uncle Albert (Nathan Lane). Albert gives Mary a very special present, a nutcracker shaped like a toy soldier. Sure enough, the wooden toy (Charlie Rowe) quickly comes to life and whisks Mary away on a seemingly charming little adventure where toys have human forms and the world is to scale of a small toy. So far, so good right?

But about forty minutes into the picture, we meet the Rat King (John Turturro, looking and acting exactly like Jonathan Pryce). And, quite frankly, he's Hitler, right down to his grand plan to ethnically cleanse the population so that only rats remain. His rat soldiers? Goose-stepping soldiers dressed in somewhat generic Nazi uniforms. The next act of the picture deals with stark explicitness in the Rat King's desire to hunt down the rebellious Prince, who was turned into a nutcracker as a way to destroy morale amidst the rebellion. We see giant factories that keep the sky drenched in black smoke, we see dissidents being captured and tossed into forced labor camps, we even see countless moments of children being forced to give up their toys as said play items are tossed into giant fire pits. No one gets tattoos on their arms, no one is forced to wear yellow stars on their jacket, and (I promise...) no one gets stripped naked and led into gas chambers, but the implications are pretty obvious for anyone with even a token knowledge of 20th century history.
That this seemingly innocuous family picture is in fact a pretty grim survival story with obvious historical relevance is of course not a flaw. I've certainly championed films aimed at kids that dare to be socially relevant, scary, and dramatic. And it certainly is all three. The film's second and third act is paced like a genuine thriller, with spirited chases, miraculous escapes, and tensely-edited action sequences. And the film does not sugarcoat the emotional impact of these events on our heroes. There is a nice moment where Max is temporarily seduced by the Rat King's promises of power. When he realizes what he's supporting, young Drozen reacts with a genuine horror that resonates. And while (slight spoiler) there is a bare minimum of out-and-out violence in the picture, Turturro plays his Rat King as if he were playing a deadly-serious super-villain. The Rat King makes it perfectly clear that his ultimate ambition is lethal purification ('Ratification') of the world (the burning of the toys throughout the picture allows the picture to symbolize mass murder without actually producing a body count). Point being, this movie is rated PG for a reason.

Okay, aside from the unexpectedly dark themes, how is the movie? It's, well, okay. The film drags a bit in the second act and becomes a bit rushed in the third, but the technical credits are all pretty solid and the actors all take this material very seriously. Richard E. Grant and Nathan Lane share a fine moment around the halfway mark where they reminisce about their childhoods (by the way, Uncle Albert sings a song pretty early on concerning the theory of relevant, in case there is any confusion as to Albert's last name). Elle Fanning gives an engaging performance, which compensates for the wooden (sorry) work of Charlie Rowe. Rowe isn't bad per se, it's just that his Nutcracker Prince is more a symbol than a genuine character. Turturro delivers the evil goods, as expected.

The Nutcracker 3D is a bizarre concoction, mixing childish fantasy with real-world horrors in a way that almost works. I wish the film had spent more time on character and less on frenetic action, but it's certainly a unique bit of 'family filmmaking' in a season dominated by animated films and CGI-infused adaptations of classic cartoons. The film gets points for its ambition, as well as its willingness to risk alienating parents even if their kids are unaware of the broader implications of the story being told. As for the 3D, it wasn't shot in 3D, it doesn't really benefit from the 3D, so see it in 2D if it's available. For those who want something to take their family to over the Thanksgiving holiday that isn't animated, The Nutcracker 3D serves its purpose. Just make sure to take note of the whole 'parental guidance suggested' bit.
Grade: C+
Posted by Scott Mendelson at 6:00 PM

Such a classical story of a kid's adventure.

Such a classical story of a kid's adventure.