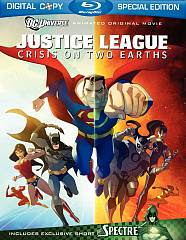 Despite my decades-long interest in the DC Universe, I've never been a fan of the whole multi-verse concept. Of course, I don't like the use of alternate dimensions in general, and it's a big reason why I wasn't super crazy about the last Star Trek picture. At the end of the day, infinite parallel universes create the same problem in fiction as predestination creates as a real-life philosophy. Both remove the meaning from one's actions. With the existence of countless alternate Earths, the question becomes why should I, as a reader or a viewer, become emotionally invested in this one story about this one set of characters? After all, this said world is just one version amongst billions and is of little consequence in the broad scheme of things. What makes our version of Superman or Batman so special amongst the countless other versions of the same characters in any number of alternate timelines?

A token amount of plot - In an alternate version of Earth, the evil Crime Syndicate (evil dopplegangers of our world's Justice League) has wiped all but one of the alternate world's Justice League. Desperate for a solution to the super-powered tyranny, lone survivor Lex Luthor (Chris Noth) travels to 'our' Earth to recruit the Justice League we know and love in order to save his world. After a brief debate about the merits of inter-dimensional jurisdiction, Superman, Flash, Wonder Woman, Green Lantern, and Martian Manhunter decide to do what they do best and the battle is on. Batman is left behind to monitor 'our' Earth, but he too will be pulled into this epic conflict. Much like last year's Superman/Batman: Public Enemies, this newest DC Animated Universe feature is basically a clothesline for a handful of epic smack-downs between super-powered foes. In this case, we have DC heroes we know hammering alternate-world evil versions of themselves.

The film, written by Dwayne McDuffie (arguably the heir apparent to Paul Dini in the DC animated universe), was originally intended as a three-part episode of Justice League Unlimited and it shows. Batman onces again stays behind (at first) in order to let the other members shine, Martian Manhunter and Wonder Woman are close friends, and Flash is again the cocky, big-hearted comic relief. Alas, without the series as a prior basis, this stand-alone movie is woefully short on character development or all that much character interaction. The film's 75-minute running time is basically divided into 'three minutes of plot, ten-minute fight scene, lather-rinse-repeat'. There is a token subplot regarding the president of this alternate America being unwilling to challenge the superpowed villains, but the film is too short to truly flesh out the admittingly engaging idea. If you get off on seeing Superman pound away at an alternate-universe version of himself, then you'll get quite a kick (and a punch) out of Justice League: Crisis on Two Earths. However, the film lacks the rich character work and thoughtful narratives that defined the DC Animated Universe that Bruce Timm and company created back in 1992.
The film's lone saving grace is the character of Owl Man. Played with low-key menace by James Woods, this 'evil Batman' basically shares my disdain for the whole 'multi-verse' concept, for arguably the same reasons I do. The climax eventually boils down to the villainous Owl Man trying to do something, anything that has true consequence in a universe where his life is simply one version of himself amongst countless others on countless other worlds. And, without revealing too-much, the finale does contain some shockingly unheroic behavior by our true-blue Justice League-ers in the name of saving countless lives. Still, the film is far too concerned with fan-friendly smack-downs at the expense of character and plot. It's not boring and it's not the least-bit unintelligent, but it's also not very engaging beyond a surface level.

The Blu Ray -
Per usual, this animated feature looks and sounds fantastic. The extras are sadly not up to par with prior titles in this series. Despite a cover that boasts 'four hours of extras', the actual content is pretty slim. In fact, there is not a single feature on this disc that deals with the making of this specific DCAU animated feature. Aside from the usual digital copy and previews of prior DCAU movies, most of the content is filler. Taking up two of the four hours of bonus content are the complete pilot episodes of the 1970s Wonder Woman television show and the unaired Aquaman pilot from 2006. The infamous Aquaman would-be premiere is pretty mediocre, but it does contain prominent supporting roles for Lou Diamond Phillips and Ving Rhames. Another 90 minutes are allotted to four episodes from the fantastic second season of Justice League. The episodes are"Twilight" parts 1 and 2 and (ironically) "A Better World" parts 1 and 2. The latter two episodes are actually a far superior variation on the story being told in Crisis on Two Earths, in which the Justice League encounters a parallel universe version of the the league where they basically become murderous, draconian vigilantes following the death of the Flash. It's a rock-solid examination of the thin line beyond super-heroism and tyranny, and the effects of the episodes had longterm consequences for the remainder of the series.

The only other bonus content is a short film, a preview of the next DCAU feature and a 33-minute documentary ("DCU: The New World - From Identity Crisis Onward") that proclaims to be about the last several years of major events in the DC Comics universe. But the latter spends 80% of its time discussing the first of said events, Identity Crisis (to be a fair, a wonderful and powerful story) while barely mentioning anything that came after. The best feature on the disc is DC Showcase Presents: The Spectre. It's basically a ten-minute short film highlighting the lesser-known, but intriguing supernatural avenger of the DC Universe. It actually manages to construct a rock-solid film noir mystery into a very brief running time. More of these please... The thirteen-minute preview teases the next movie, Batman: Under the Red Hood, which is a direct adaptation of a Judd Winick arc from 2005. It was a cleverly written and exciting piece of storytelling, but it revolved around one element that... well I'm guessing if you're reading a review of a DC Comics original feature, you probably already know how said story turned out. Still, the preview makes the film version look quite good and promises a return to emphasis on character over slam-bang action.

So in the end, you have a lesser entry in the franchise, with extras that shed no illumination on the project while accidentally pointing out its weakness via inclusion of superior episodes of Justice League. If you're a fan, it's worth a rental. But it's not worth buying unless you own all of these out of habit.
Posted by Scott Mendelson at 12:01 AM

Although the very talented Adam Beachen has written for me in animation, his Brave and Bold Hardware/Blue Beetle issue will be the first time he's written a Milestone character.