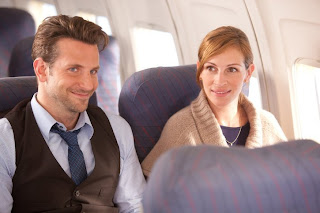 It wasn't terribly difficult to predict that a star-studded romantic comedy would rule over the long Valentine's Day weekend, especially one conveniently titled Valentine's Day. But the Gary Marshall mega-mush fest still impressed over the four-day weekend (Monday was of course Presidents' Day). Pulling in $56.2 million over three days and $63.1 million over four, the film scored the biggest Presidents' Day weekend in history and the second-biggest three-day opening ever for a romantic comedy (Sex and the City opened with $57 million in late May 2008). Even with the benefit of a Monday holiday, the $56.2 million picture's 3.8x multiplier for the Fri-Sun portion is still quite impressive (it pulled in $23.3 million on Valentine's Day Sunday). Even more impressive for the genre is the $35 million that the picture racked up overseas, giving the film a $98 million worldwide debut weekend. The film faces no real demographic competition (the film played to 68% females) until March 19th, when the Jennifer Aniston/Gerad Butler romantic comedy The Bounty Hunter is released. So even if next weekend sees a moderate fall-off from the massive opening, business should be steady throughout the season as the film becomes the second choice for general moviegoers. $150 million is a certainty at this point and $200 million isn't out of the question.

Second place went to the surprisingly strong would-be franchise starter, Percy Jackson and the Olypmians: The Lightning Thief. Directed by the man who started the Harry Potter franchise (Chris Columbus), this $95 million adaption of a popular young-adult fantasy series grossed $31.2 million over three days and $38.6 million over four. While it's no Harry Potter and the Sorcerer's Stone, Twilight, or The Lion, the Witch, and the Wardrobe, the opening exceeds the $19 million three-day debut of The Spiderwick Chronicles, the $23 million debut of Eragon, and the $27 million opening of The Golden Compass (in the name of mercy, we won't bring up The Seeker: The Dark is Rising). While I questioned the marketing campaign which seemed to be hiding the all-star cast (the flick stars Sean Bean, Pierce Brosnan, Uma Thurman, Rosario Dawson, Catherine Keener, and Joe Pantoliano), one could argue that Fox's work was done when it attached the trailer to every print of Avatar back in December. Besides, now that I've seen the film (it's pretty mediocre with a ghastly second act), I can attest that only Pierce Brosnan and Catherine Keener are in the picture for any length of time (most have fewer minutes of screentime than Julia Roberts in Valentine's Day).  Barring a complete collapse (I can only presume that the books were better, so expect a revolt from fans), this one should slide past $100 million with equally bountiful overseas business. So, unless Sony steals away lead Logan Lerman for their 3D Spider-Man reboot, this is the start of a new series for Fox (Fox would probably just recast and press ahead regardless).

Third place went the much-delayed and much-troubled horror throwback, The Wolfman. Originally scheduled to open in November of 2008, the picture has been delayed and re-edited countless times. Despite generally mediocre reviews, the picture played strong all weekend and ended up with a $31.4 million three-day gross and a $35.5 million four-day weekend. Ironically, had the film kept its original budget of $90 million, then the debut would have been a slam-dunk to long-term profitability. Alas, said delays and re-shoots sent the film's cost to $150 million, which means that the film will have to score overseas as well (it has made $57 million worldwide thus far). All things considered, Universal would have been wise to just release whatever cut of the film was delivered for the first release date. Fourth place went to Avatar, which increased 3.3% over its previous three-day weekend. With $23.6 million in three days and $28.7 million in four, the unstoppable monster of a movie has now grossed $666.3 million. More impressive is its worldwide total, which is now at $2.35 billion. If the picture can withstand the loss of its 3D screens on March 5th (a BIG question mark), then a $800 million domestic gross and a $3 billion worldwide take is not unreasonable.

Fifth place went to Dear John, which suffered from both direct demo competition and the sheer front-loaded nature of its opening weekend. In all the huff about how 'the girls of Dear John beat the boys of Avatar over Super Bowl weekend', someone forgot to mention that Avatar nearly tied Dear John last Saturday and easily out-grossed the romantic drama over Super Bowl Sunday. The Nicolas Sparks adaptation fell 47% in weekend two, grossing $16 million over three days and $18.2 million over four. Still, weep not for the weepie, as the picture as already grossed $53.9 million, which puts it in second place for Sparks adaptations in just eleven days (The Notebook grossed $81 million in summer 2004). The rest of the major releases fell as surprisingly small levels, with The Tooth Fairy dropping 8%, Edge of Darkness dropping 29% (after a 60% second-weekend plunge), The Book of Eli dropping just 23%, and The Blind Side dropping a whopping 9% (perhaps football withdrawal?). Perhaps the end of the crippling snowstorms is to blame, or just the long weekend, but the holdovers did pretty well hanging over during the holiday frame. Oh, and a film I've never heard of, Fox Searchlight's My Name is Khan, opened in 13th place with $1.94 million on 120 screens.

That's all the news that's fit to print. Next weekend sees the release of Martin Scoresese's Shutter Island (a rare movie postponed because it was allegedly too good), which means we can all stop seeing (and quoting) the trailer every time we go out to the movies. The only other noteworthy opening is the four-screen release of Roman Polanski's The Ghost Writer. It's supposed to be quite good, but I imagine the director has bigger (self-inflicted) problems than critical reception.

No wonder dear,it is predicted . Look at the release date 12th February. It is obvious people will go at least one time in the theater hall. Keep a close watch at its future. I will watch this movie when it will come to my Satellite TV

No wonder dear,it is predicted . Look at the release date 12th February. It is obvious people will go at least one time in the theater hall. Keep a close watch at its future. I will watch this movie when it will come to my Satellite TV