Review: Torn between being a stand-alone drama and an all-encompassing history lesson, Angelina Jolie's ambitious In the Land of Blood and Honey (2011) is the very definition of a noble failure. 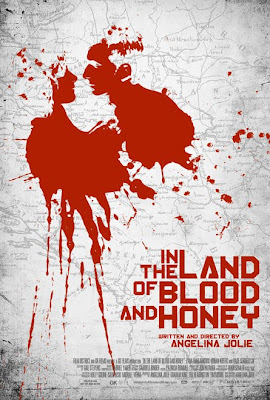 Angelina Jolie's director debut is caught between two very specific goals.  On one hand, it wants to be a thoughtful, adult romantic drama that happens to be set during a period of rather ghastly civil war.  On the other, because there really hasn't been a major motion picture set during the Bosnian war that raged primarily from 1992-1995, writer/director Jolie feels a need to craft a somewhat definitive account of the conflict. As a result, much of the picture feels like a glorified book report, with characters ham-fistedly explaining the nature of the conflict, the living conditions of the victims, and character arcs.  The film constantly violates the 'show-don't-tell' rule, with lead characters explicitly stating their emotions and their character arc.   Like Atom Egoyan's Ararat (which dealt with the 1915 Armenian genocide), the film spends much time feeling less like a movie and more like a verbal power-point presentation.  The film earns kudos for revealing a bit of somewhat forgotten history, and it deserves plaudits for telling its story from the point of view of actual participants, rather than 'an outsider looking in'.  But no matter how noble its intentions, the film fails as a history lesson and a stand-alone drama.

The film, in brief, concerns a very tricky romantic relationship that develops between a conflicted Serbian soldier (Goran Kostic) and a young Bosnian woman (Zana Marjanovic) who ends up living in captivity under his watch during the civil strife.  While somewhat manufactured controversy erupted last year over rumors that Jolie's script involved a woman falling in love with her rapist ('Smoke but No Fire'), the actual movie is both more and less complicated.  While Danijel is not a rapist, he and Ajla have not a prior romantic relationship but a mere flirtation before war sets in.  As a result, the relationship truly does develop while Ajla is Danijel's prisoner.  Does Ajla truly fall for Danijel, or is she merely pretending to love him for his protection and/or grateful for his protection to the point of affection?  The film never outright states Ajla's feelings on the subject, which is actually impressive.  So while the film may indeed draw controversy for its would-be romance, Jolie admirably doesn't tell the audience how to feel about this most unusual love story.  Their relationship is presented in a coldly objective fashion, and most of their sex scenes are film in the same quasi-static detail as the several rape sequences throughout the film.  At times, it seems like Jolie is crafting a romance more suited to a stereotypical Pedro Almodóvar picture.  Jolie doesn't tell the audience whether to embrace or be repelled by the Beauty and the Beast meets Schindler's List (think Fiennes and Davidtz) overtones, but the lack of at least a touch of melodrama renders large chunks of the film as rather lifeless.

Speaking of rape scenes, the picture is rather unflinching in depicting the horrors of this specific conflict.  Within the first reel, we've witnessed a machine-gun massacre of civilian men and a more-or-less onscreen rape of a random female captive.  It sets the tone for what's to come, as the violence that occurs to and around Ajla is presented with striking cold and brutal detail.  But the film cheats just a little by having Danijel step aside for most of the atrocities, allowing Kostic's tortured soldier to (mostly) not directly shed innocent blood or commit sexual assaults even while the men he commands do so with impunity.  The film also gives him a number of self-congratulatory monologues he basically represents 'the conflicted soldier' or 'the moral man given power in immoral times'.  This would be less obnoxious if he were not the only conflicted oppressor, but with the exception of one soldier who has one moment discussing his pregnant wife, the majority of Bosnian soldiers are presented without shadings.

But while the central love affair flirts with genuine kinkiness that belies its alleged intentions as 'a very important motion picture', the need to be a somewhat all-encompassing saga of the genocide becomes the film's undoing.  Much of the first half of the film is taken up by what can only be called educational lectures, as characters state the causes of the war, the nature of the conflict, the hardships faced on the victims, and the lack of international help. We also get much monologuing that explicitly explains why the oppressors felt they had the moral right to wipe out another group of people, much of it from the mouth of Rade Serbedzija.  Serbedziga does get one solid scene late in the film where he is able to deliver character exposition while also creating tension and dread, but most of his limited screen-time is wasted.  I do not know how much of the clunky dialogue emanates from translation issues (the script was written by Jolie, translated into Bosnian, and then translated for us into English subtitles), but we have characters engaging in conversations that feel like bullet-points of what the audience should know about the Bosnian war.  Furthermore, despite the time given over to its educational pursuits, the film leaves the viewer about as informed about the conflict as they would be after spending five minutes on Wikipedia.

Despite the film's fine intentions and adult treatment of adult subject matter, In the Land of Blood and Honey doesn't quite work as a compelling piece of drama.  It strains itself to present educational information while being less informative than it thinks, while it delivers a core narrative that sacrifices audience engagement for an otherwise welcome objectivity.  It is well acted and makes the most of its $15 million budget (the exterior moments are as large-scale as the story demands).  Angelina Jolie deserves plaudits for financing much of the movie herself, and for tackling something truly challenging and personal for her sure-to-be-scrutinized writing and directorial debut.  But it pains me to say that the film doesn't work as either entertainment or education.  It is a noble effort, but it is not quite a good movie.