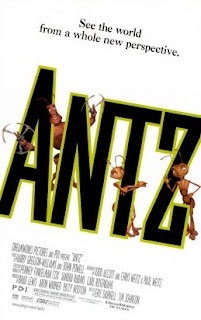 Antz is the best Woody Allen movie in several years. It contains Sylvester Stallone's funniest performance since Demolition Man. It also contains the standard excellent performances of Gene Hackman and Christopher Walken. The catch is that it is a computer animated film about bugs. Z (Woody Allen) opens the film on a shrink's couch. Z is rambling about the problems that Woody Allen characters usually suffer from. "Even as a child, I never got any attention," Z exclaims. "My father ran off when I was still a larva." Z is doomed to be a worker ant, spending his days shoveling dirt and being part of giant wrecking balls, the demonstration of which provides the films first truly stunning image.

His friend (Jennifer Lopez) is more positive about her fate, but Z is still unhappy. Meanwhile, Princess Bala (Sharon Stone) is less than joyous about her impending marriage to the General (Gene Hackman). One night, Bala, heads off to the worker bar, and instantly casts a spell over Z. After inciting a bar brawl, she is hurried away, leaving Z to wonder if he will ever see her again. So, in order to impress Bala, Z convinces his soldier friend (Sylvester Stallone) to let him switch places for the day. This works well for Sly, as he is captivated by the simple life of the worker and falls for Lopez. Alas, Z ends up the only survivor in a fatal battle with the acid-spewing termite legion, which is not unlike the gruesome battles from Starship Troopers. Hailed as a hero, then exposed as a fraud, Z accidentally kidnaps the princess as he heads off to find the legendary Insectopia as the Hackman's evil scheme takes hold.

First off, this film is a joy to look at. Miles ahead of the technology used in Toy Story, although I liked that film better, each frame is packed with bold colors and the tiniest of details. Each blade of grass looks utterly and completely real. The animation is wonderful as are the extraordinarily detailed expressions that appear of the bugs' faces. At times, I forgot I was watching bugs and simply assumed they were human. Of course, all of the best animation possible wouldn't matter if the script stunk. But, this is a well-written film indeed. Dreamworks' Antz is a witty, insightful, and charming animated epic about the perils of conformity. It is a "human" comedy that is so adult in nature that older audiences might actually enjoy it more than kids. The film is filled with little details about the nature of ants, like the scene where Allen cradles and converses with the dying head, and only the head, of his fallen comrade. The script is filled with clever dialogue and surprisingly deep characters. While not on the level of Hunchback of Notre Dame, the level of depth rises above Hercules, Anastasia, and the overrated Mulan.

Disney has its own computer animated bug flick coming out in late November. Judging from Antz, and the trailer for A Bug's Life, the latter will likely lose the race in terms of quality, if not box office as well. Dreamworks has emerged as the one true challenger to the Disney Empire. 20th Century Fox's Anastasia was merely an above average Disney-clone, and Warner Bros. doesn't seem to be trying, which explains making Quest For Camelot over feature lengh versions of its extremely popular and critically lauded Batman and Superman cartoons. Only Dreamworks has raised the bar by trying something different. Antz is not a normal animated film, it's dark, strange, violent, and contains NO songs and NO annoying animal sidekicks. In essence, it is the first big budget ($45 million) animated film that obviously wasn't made by the Mouse House.

Grade: A-
Posted by Scott Mendelson at 5:44 PM No comments: Links to this post