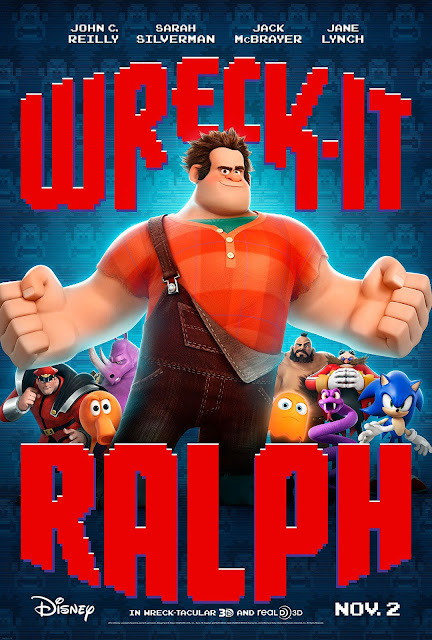 It is perhaps slightly disappointing that Disney's latest animated feature is not so much an example of branching out so much as pouring the same drink into a new glass.  Just as Pixar's Brave (review) seemed like an attempt to fit alongside the standard Disney princess mold, so too does Wreck It Ralph  (trailer) exist as a Disney cartoon that would rather have a Pixar logo at the front.  But in the end Wreck It Ralph is a Disney cartoon through-and-through, which is not necessarily a bad thing.  It is vividly animated and generally entertaining, and it uses its video game settings as the basis for any number of clever jokes.  But truth be told the film is not really about video games, merely using the video game format as a colorful wrapping for a rather conventional story.  In hindsight its story is actually somewhat generic, not going as far off the reservation as Meet the Robinsons (review/essay) or even Bolt.  It's a witty and charming film, but it's slightly dispiriting how often it teases us only to skirt back to genre convention.


The film begins with great promise, diving head first into its video game universe and presenting us with a rather tragic lead character, a seemingly decent man condemned by fate to be loathed and despised by all around him.  Wreck It Ralph (John C. Reilly) has spent the last thirty years as a villain in a Donkey Kong-type video game, but the problem is that he's treated as a villain outside of the game as well.  When the arcade closes and the characters go home for the night, Ralph is still treated as something to be feared and loathed.  Sleeping in a literal garbage dump on a bed of bricks, he yearns for the chance to prove that he is not really a 'bad guy'.  The idea of a man being condemned to be loathed as an automatic byproduct of his occupation, as well as the idea of treating actors as if they were their characters, is an interesting one.  Ralph is programmed to wreck things in a video game, but his curse is that those around him don't realize or don't care that he's basically playing a role.  The narrative itself starts once Ralph takes it upon himself to win himself a medal, which is the arbitrary symbol that he deserves the spoils that comes with being a hero in his game-world.  But those expecting a mad caper where Ralph jumps from game-to-game with satirical commentary on the various video game genres will be frankly disappointed.

After a brief trip into a violent bug-infested first-person shooting game (which is frankly far more intense and scary than it needed to be... my daughter was not amused), Ralph stumbles into a colorful, candy-filled variation on Mario Kart, which is where the bulk of the film takes place.  Ralph meets up with a young girl who is apparently a glitch in the game's programming and thus also condemned to be ostracized.  Vanellope von Schweetz (Sarah Silverman) will likely be the favorite character of most of the younger audience members, and it is to the film's credit that the picture is as much about her as about Ralph.  We also spend ample time with Fix-It Felix (Jack Breyer) who goes off in search of the missing Ralph and Sergeant Calhoun (Jane Lynch), of the aforementioned bug game who realizes that one of the bugs from her game ended up in the racing world, which may spell doom for all.  Most of the plot is taken care of in the first third of the film, leaving it frankly drifting in the wind for much of its middle thirty minutes.  Aside from a training-to-race montage, there is little of narrative or character consequence in this middle portion.  Disney movies have often struggled in their middle sections, as was the case with Bolt and even, to a lesser extent, with The Princess and the Frog.

But the third act brings the film home safely with a number of strong character beats, a couple surprising turns, and a warmhearted finale that works even if you realize how cynical it really is.  I'm certainly not going to reveal what happens, but the film promises a powerful moral dilemma at the start of its third act, one that offers the tantalizing idea of being a 'good guy' not as saving the day but as making the right choice even when it's a horrible one.  But quicker than you can say Matrix Revolutions, the film negates its Kobayashi Maru and sets the course for a more traditional finale.  Even if I was disappointed in how the film teased us with challenging ideas before saying 'never mind', I must concede that the character relationships are established enough to indeed rouse our emotions when the somewhat more conventional ending arrives.  As far as Vanellope's ultimate fate, the film ends on a clear example of having your cake and eating it too.  And, again being vague here, the film skirts with ending in a 'don't change your fate, just be happy with your lot in life' vein similar to Brave and especially A Shark Tale.  But even then I must concede that the primary character arcs are wrapped up in an emotionally satisfying fashion.

I wish Wreck It Ralph was more willing to challenge its own status quo and I wish it used its video game settings for more than just a serious of admittedly clever jokes and cameos.  In the end, the entertaining and often witty motion picture ends up being merely a slight tinkering of the classic Disney formula rather than the charting of a new path.  It's a fine piece of family entertainment, horrifying bug attacks aside, and the film looks superb as is the norm for any major animated film these days.  But Wreck It Ralph is arguably less than the sum of its parts and eventually less than the sum of its initially challenging ideas. It earns points for building strong characters and for earning hearty laughs.  And it ends on the idea of how important it is for young girls to have role models in mass media even while giving a nod to the Disney merchandising machine. I don't demand subversion of the status quo in every would-be genre film.  But Wreck It Ralph promises next-generation gaming and delivers old-school Nintendo in a shinier box.

Grade: B
Posted by Scott Mendelson at 8:26 AM