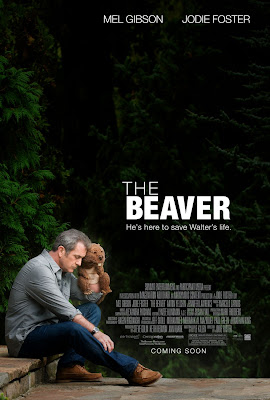 The Beaver is a film hamstrung by an inability to settle on just which story to tell, and how exactly to tell that story. The film basically concerns a suicidal husband/father who apparently adopts another personality through the guise of a stuffed puppet. But director Jodie Foster and writer Kyle Killen constantly bounce back and forth in terms of telling the story through his eyes or through the eyes of his family and coworkers. As a result, there is a constant shift of narrative focus and every nearly major character gets shorted. There is fascinating material on display, with some truly fine performance work to boot, but the whole ends up far less than the sum of the occasionally exceptional parts.

A token amount of plot: Walter Black (Mel Gibson) has been suffering from crippling depression for two years. Once a devoted family man and successful CEO of a small toy company, Walter is now borderline comatose, and his family has had enough. Thrown out of the house, Walter is on the verge of suicide when he comes upon a discarded stuffed beaver puppet that inexplicably starts talking to him. Call it split personality and/or a complete psychotic break, but the beaver soon begins living through Walter, and the beaver's personality seems to be a better person than Walter. Is this new personality the beginning of Walter's healing or the end? If the film works at all, it is as an acting treat. To say that Mel Gibson throws himself into this role would almost be stating the obvious, but it should be noted. It is a fearless and thoughtful performance that never winks and never goes for easy sympathy. Had Mr. Gibson been in better standing with the film community at the moment, he would probably be expecting an Oscar nomination next year.

The only other particurly showy role goes to Anton Yelchin as Gibson's oldest son Porter, who fears that the mental illness that has claimed his father will eventually come for him as well. In fact, Yelchin arguably has as much screentime as Gibson, and his relationship with a cheerleader (Jennifer Lawrence) who has hired him to ghost-write a graduation speech is a highlight of the film. Lawrence already proved her worth as a leading actress last year with Winter's Bone, but it is worth noting that she also brings vivid life and genuine charm to a character who could have just been 'the girl'. Lawrence's Norah gets the benefit of a screenplay that gives her plenty of backstory and motivations independent of her role in Porter's life.

Ironically, the one character who is left with least is Ms. Foster herself, as she gets little to do other than play 'the wife'. One would think that her story and her reactions to Walter's newfound madness, would be the primary one to focus on, but Meridith gets only a few brief moments to dominate and next to no time to bare her soul (figuratively or literally) at her husband's destruction of the family they have raised. Aside from the fact that she designs roller coaster (which we're told in an introductory voice over), we learn nothing about who this woman was or is. The only major character of note is the vice-president of Walter's toy company (Cherry Jones, the last president on 24). Jones brings her usual class and professionalism to a token role, and I only imagine that her big scene remains on the cutting room floor.

Any one of these characters, be it Walter Black or the people affected by his illness, could be the focus of a film like this, yet none of them really are. Gibson's brava character work remains somewhat abstract, with the exception of one third-act 'in character' rant that hints at a sadder reality at the heart of the picture. We see little of Foster's reaction to the chaos around her, so our focus and sympathy instead resides with the burgeoning romance between Yelchin and Lawrence. This is a very short film (about 85 minutes before the end credits), and one cannot help but think that there is a longer, more fleshed-out version of this picture existing in one form or another. Frankly, most of the film's issues could have been dealt with by an additional twenty or thirty minutes, which makes the inexplicably brief running time a genuine puzzle.

The film also takes a strange third-act turn where (vague spoilers I suppose) Walter becomes a flavor of the week celebrity due to his mania. Yes, I can imagine a world where a guy who talks through a puppet could end up a popular talk show guest, but the various cameos (Matt Lauer among others) and larger-than-life developments take us out of the theoretically realistic family drama. And while the film does not shy away from the dark and disconcerting psychological undertones of the film's occasionally quirky tone, it still seems almost afraid to truly commit to its darkness. Without going into details, the film gives us a perfectly moving and thoughtful finale before devolving into a brief montage that seems to exist only so we won't leave the theater in a funk. It is one thing to offer hope, it is another thing to explicitly announce where the story is headed after the credits roll.

Yet despite all of that, there are moments of The Beaver which are quite powerful. The idea of Walter using his psychosis to become a better businessman and a better husband and father is an interesting one, and the moments between Yelchin and Lawrence have a grounded charm not often found in cinematic teen romances. Gibson is fascinating to watch throughout, regardless of whether you choose to associate this fictional character with Gibson's real-life problems (you shouldn't, but that's for another essay). And it remains inspiring that a film this odd, dark, and sad is being released by a decent-sized studio outside of the Oscar season. The theoretical two-hour cut of The Beaver, which fills in all of the character gaps and gives everyone their moment to relate, may in fact be a terrific motion picture. But this 90-minute version remains a compelling but painfully unfocused film, a weak whole filled with engaging and occasionally wonderful parts.