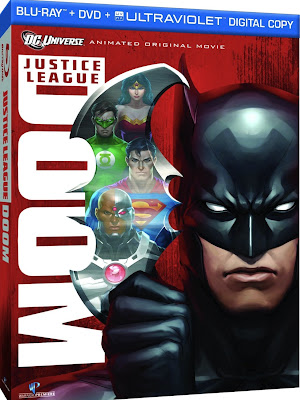 I've complained before about the inexplicable need for the DC Animated Universe features to be so bloody short.  Only the anthology Green Lantern: Emerald Knights has run over 80 minutes and at least two (Batman: Year One and Superman/Batman: Public Enemies) were barely an hour.  For whatever reason, the thirteen features since late 2007 have all hovered around the 75 minute mark, and it's almost always been a point of contention.  But this time around, that truncated running time has become a fatal flaw, as this loose adaptation of a 2000 Justice League of America arc ends up sacrificing the entire dramatic crux of the story.  All that's left, while not boring, is a rather route pure action tale with one large-scale set piece after another.  And by holding off the story's key reveal until near the end of the picture, the film ends up being a giant set-up to a plot twist 90% of the viewers will already know about, and the other 10% will be spoiled by the synopsis on the back of the box.

A token amount of plot:  Umm... not much.  Most of the first act is filled up by a sprawling battle between the Justice League and the Royal Flush Gang.  After the league goes their separate ways, we are introduced to what amounts to a new Injustice Gang/Legion of Doom, comprised of several B+-level super villains (Star Sapphire, Metallo, Ma'alefa'ak, Bane, and Cheetah) led by Vandal Savage.  Long-story short, Mirror Master has some new intelligence that will allow this group to take down our super friends, and the second act basically plays out as a montage of one super hero after another being physically and mentally crushed.  Can the Justice League survive this onslaught?  What is Vandal Savage's master plan?  And just how did this motley crew of super villains so efficiently bring down the Justice League?  If you read "Tower of Babel" or the back of the box for this Blu-Ray release, you already know the answer to the last question.

It's difficult to discuss this film's failings without heading into third-act spoiler territory, so I'll hold off for now and offer a warning when the time comes.  The film is visually gorgeous, as are pretty much all of the DCAU features up to this point.  I could carp that Superman's facial features make him look a bit young, but that would be petty.  Come what may, the picture is basically three large action sequences that take up about twenty minutes apiece, with 3-5 minutes before and after for 'plot and character'.  The action sequences are suitably violent and well-staged (the film earns its PG-13), and the whole 'each hero gets taken down' scenario allows for a wide variety of action sequences.  But there is no emotional investment and no real dramatic arc.  It's obvious by the voice casting that this is intended as a kind of Justice League: Unlimited reunion (Kevin Conroy, Michael Rosenbaum, Susan Eisenberg, and Carl Lumby reprise their iconic heroic roles, as do several of the villainous voice actors).  The film would have been stronger as a visual continuation as well, since we'd have the appropriate mythology to work off of as opposed to a one-off story.

If you've read "Tower of Babel", then you'll know that the story (which involves Ra's Al Ghul instead of Vandal Savage) revolves around a seemingly unthinkable betrayal by a member of the Justice League against his or her fellow members.  In the original four-part story, said reveal occurs at the halfway point, leaving plenty of time to both wrap up the actual action story-line and deal with the repercussions of said actions.  This film version barely touches on the moral and ethical ramifications of what transpires, giving but a few lines right before the climax and a brief epilogue where no real discussion is had.  Without the meat of the story, what we're left with is just a 75-minute smack-down, without even the kind of clever dialogue and interaction that would have made it worthwhile beyond the visceral appeal.

Thus, despite some fine super-heroic action and perfectly solid vocal performances (even though I've gotten to the point where I prefer George Newbern as Superman as opposed to Tim Daly), Justice League: Doom is, like Justice League; Crisis On Two Earths, basically a glorified four-part Justice League: Unlimited episode with the meat removed.  There are other minor nitpicks, such as swapping out Phil LeMarr's John Stewart for the more fanboy-friendly Nathan Fillion as Hal Jordan (Bumper Robinson as Cyborg shows up here, so I suppose someone decided that there couldn't be more than two black superheroes).  There is a somewhat confusing bit in the second act involving a hostage situation where at least some of it is revealed as a visual hallucination, but how much of it was real is never revealed.  Also, in the final battle, it would have been far more entertaining to watch the various heroes go up against villains other than their designated opposite number.  Justice League: Doom is an entertaining, but painfully thin, animated movie.  It is not boring, but it is also not very engaging and lacks any real reason to exist. 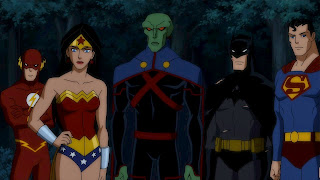 The Blu Ray - Technical specs are snazzy per usual.  There are two major bonus features, both of which exceed the main feature in both entertainment value and sheer quality.  There is an eighteen-minute discussion entitled "Guarding the Balance: Batman and the JLA".  It deals with the moral issues that the film skirts around and applies it with surprisingly thoughtfulness to our current post-9/11 surveillance state.  Of course it makes it all the more frustrating that the feature feels so thematically empty.  There are two six minute pieces, one is a look at the somewhat groundbreaking creation of Cyborg (a black super hero who was not defined by his race), as well as a preview of the next DCAU feature, Superman vs. the Elites. Also included is a crew commentary, the usual DVD and digital copy of the feature, and two bonus episodes of Justice League.  In this case we get "Wild Cards", the two-part episode that features the Royal Flush Gang and, more importantly, Mark Hamill's last vocal performance as The Joker for a DCAU project (he reprised the role for Batman: Arkham Asylum and Batman: Arkham City video games in 2009 and 2011 before apparently retiring the role).
The prime bonus feature is an unfortunate one.  There is a 36-minute documentary on the life and work of writer/producer Dwayne McDuffie, who suddenly died last year of complications from heart surgery at the age of 49.  It's a touching and compelling documentary, discussing both his art, his apparent genius, and the ground-breaking strides he made in regards to African-American superheros in mainstream comics and cartoons.  I said my piece about him last year, but I firmly believe he is responsible for basically saving the DC Animated Universe by pulling the animated Justice League cartoon out of its season one-slump and righting the ship.  His loss is our loss, and this documentary makes you all-too aware of that (and makes me feel bad for basically panning his last couple DCAU movies, but I digress).

The film is thin but entertaining, and the special features are worth at least one gander.  This is the thirteenth such feature since 2007, so you don't need me to tell you whether this is a rent or a purchase for you at this point.