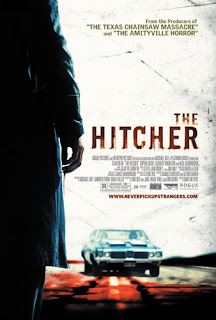 When my fiancee and I approached the specific theater, we noticed that the employees were checking Ids with unusual vigor, and I silently laughed to myself. I had nothing to worry about. After all, I was old enough to distinctly remember the original Hitcher being released in theaters. Gosh, I'm getting old. Yes, I'm also old enough to remember what made the original so quirky and interesting back in ancient 1986, so I can tell you that this remake seems to make a conscious effort to dilute all that was special about the old trashy B-movie original.

The plot... Grace and Jim are two kids who are traveling on a road trip for spring break along various highways. This, along with the fact that they are both very attractive, is all we ever learn about them, period. Meanwhile, as Ken and Barbie drive along in search of America, the mysterious John Ryder steps out from the darkness, with a broken down car and the completely trustworthy persona of Sean Bean. Now Sean Bean is one of my favorite actors, but I kinda wish they had cast Sam Neil, so it would advance my ongoing theory that one should never, ever travel anywhere with Sam Neil (Dead Calm, Jurassic Park, In The Mouth Of Madness, Event Horizon, Jurassic Park 3, The Triangle, etc).

Anyway, when Sean Bean shows up in a dark, flapping trench coat in the dead of night and asks for a ride, most intelligent folks would opt to call him a tow-truck instead (AAA: it's not just for responsible adults, it's for serial killers too!). Of course, these idiots do give him a ride and mayhem and carnage ensues in a similar manner to the original. Needless to say, the violence is a little more graphic, but since the original's violence caused a minor stir back in the day, one can't skirt on the blood and/or guts (the 'oh-my!' moment of the original, which was off-screen, is now presented in all it's gory, err, glory). Fun fact: the original was funded by one of the companies that George W. Bush was a board member on before politics, and its financing of The Hitcher was a minor scandal during the 2000 election, due to its infamous violence. 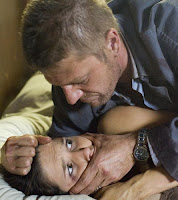 What is skirted on, unfortunately, is the darkly comic character interaction of the original. In the first film, the hunted was not a CW-tested teen couple, but rather a single lonely, vaguely geekish kid, Jim (C. Thomas Howell) on his first adventure. And John Ryder (Rutger Hauer in a career-defining performance) wasn't just a one-note killing machine, but a weird dreamlike phantom who tried to connect to our hero for reasons that were implied but never stated. And the addition of a random girlfriend right at the beginning allows the filmmakers to play gender reversal at a few key points, which is fine until the ghastly finale that exchanges dark pathos and compromised humanity for false and insulting 'girl power'.

This is the first real miss for Platinum Dunes, which was founded by director Michael Bay as a way to give untested but promising filmmakers a crack at success, using lower-budget remakes of older horror films as the vehicle. They debuted with the slightly better than expected Texas Chainsaw Massacre remake (2003), then returned with a stunningly scary and effective improvement on The Amityville Horror (2005), then followed up at the end of last year with a prequel to their Chainsaw film that was actually better and far more interesting than both of its forebears (yes, that's right, the characters were far more richly developed than those in the 1974 'classic').

With this fourth entry, we get the very kind of film that most everyone was expecting from this company when they were first announced. It's boring instead of scary, condescending in its alterations, and completely drained of the disturbing character interaction that made the original as memorable as it is to geezers like myself. In short, The Hitcher is one ride you should refuse. And, for a better example of this genre, try the original Hitcher (duh), The Hitcher II (it's allegedly decent made for video sequel; can't be any worse than this one right?), Duel (Stephen Spielberg's first movie, way back in 1971), and one of my favorite scary movies of this decade, Joyride, a stunningly well-made thriller that didn't find the audience it deserved in late 2001.

Posted by Scott Mendelson at 11:28 AM No comments: