Review: The Adventures of Tintin (2011) delivers terrific animation, moments of brilliant action, but little else. 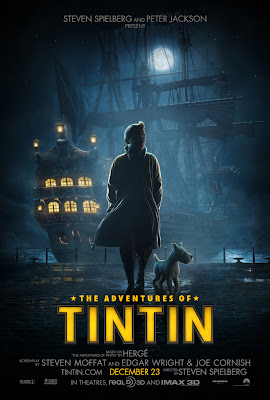 The Adventures of Tintin: The Secret of the Unicorn
2011
105 minutes
rated PG

I've written before about the recent quasi-trend of filmmakers spending time, effort, and money merely to concoct glorified homages to the films of yesteryear.  Most of these films contain little to no relevancy or ideas and exist merely as an exercise in nostalgia.  But The Adventures of Tintin: The Secret of the Unicorn is a curious variation on this sub-genre.  Not only is it a pure homage to the old-fashioned adventure films best represented by the Indiana Jones series (and the serials and pulp novels such as this series that inspired them), it is a homage directed by the man who helped create that defining series in the first place.  On the surface it is an adaption of the Georges Rémi comic book series that ran from 1929 to 1976.  But while the film certainly exists in that world, with a faithfulness that I cannot attest to one way or the other (I've been told it's quite faithful), it basically amounts to director Steven Spielberg (and producer Peter Jackson) using the motion-capture animation technique pioneered by Robert Zemeckis to craft a homage to the theoretical Steven Spielberg adventure film.  With these new crayons to play with, it's a darn shame that Spielberg couldn't think of anything better to draw than what often feels, intentional or not, like a self-administered pat-on-the-back.

The plot is taken from two of the twenty four Tintin adventures, "The Secret of the Unicorn" and "Red Rackham's Treasure" plus bits of "The Crab with the Golden Claws" thrown in for good measure.  It is a relatively simple tale, one which introduces us to young Tintin (Jamie Bell), a journalist who happens to break his stories while engaging in all manner of swashbuckling adventure.  This time around, his attempts to purchase a model ship attracts the attention of the nefarious Ivan Ivanovitch Sakharine (Daniel Craig), who wants that ship for himself for reasons that are explained soon enough.  Long story short, young Tintin (and his dog Snowy) eventually end up in Sakharine's evil clutches, and the plucky hero must team with drunken Captain Haddock (Andy Serkis) to decipher the mystery and defeat Sakharine.

Without being crude about it, I was personally struck by how much this story (which is, I must repeat, a mix of three old stories) resembles the seventh-season The Simpsons episode "The Curse of the Flying Hellfish".  That's not a criticism per-se (obviously the source material predates The Simpsons by about fifty years), but it makes an unexpected comparison.  That Simpsons episode has what this adventure severely lacks: character development and emotional attachment.  The film opens strong, with an initial twenty minutes that cleverly sets up the plot and introduces the two primary characters.  But after Tintin finds himself in explicit peril, the film basically isolates itself from the outside world.  While the film isn't quite non-stop action, it is awfully busy with incident, which leaves hardly a moment for any kind of character work for either hero or villain.  Tintin himself is a relative blank slate and Sakharine's only intrigue comes from a strong vocal performance from Craig.  Andy Serkis (obviously a motion-capture expert) alone brings his character to full-blown life, as Haddock eventually takes center stage as we learn more about the connection between himself as the murderous thief.  No matter how impressive the action might be (more on that later), the film suffers due to our lack of engagement in a generic hero and a generic villain, and a general lack of colorful supporting characters (the number of prominent speaking roles is surprisingly small).

As for the action, there is surprisingly little of it for the first two acts.  While there are the occasional moments of fisticuffs, close-call escapes (including one classic Spielberg-ian brush with death involving an airplane propeller), and just a smidgen of violence, there is little in the way of full-scale action until the climax of the picture.  Up until the last reel of the film, the best action sequence actually involves an extended flashback.  That moment, a fiery battle between two warring ships, contains real stakes (much of the rest of the action is so kid-friendly that there is no real tension) and imagery that actually impresses the eyes and intrigues the imagination. Yes, things pick up in the third act, but by that time we have long given up caring about these glorified action figures.  That's obviously a shame, and it's even more frustrating when Spielberg finally pulls out all of the stops in the finale, which (without going into details) involves a glorious four-minute chase sequence that is animated a single take.  This moment is arguably one of the best action scenes of Spielberg's career and one of the more impressive action beats of the year.  Alas, our lack of viewer investment prevents it from reaching any higher on the list of classic action sequences.

As is, the film exists as a purely technical exercise in motion-capture and 3D work.  In both cases, the film qualifies as a success.  Unlike some, I actually enjoy the hybrid of quasi-reality and animated fantasy that comes with motion capture and the work done here is every bit as impressive as the pioneering Robert Zemeckis pictures.  And while the film doesn't need its 3D, those choosing the format will get their money's worth, especially (yet again) in several major third act moments (there is an admittedly clever scene involving flying glass that unquestionably impresses both narratively and visually).  If the film put its 2.35:1 aspect ratio and theoretical large-scale action canvas to better use, I'd be more inclined to recommend IMAX on principle, but the film's quality makes it an open question.  So while the film excels from a technical standpoint, it is very nearly a failure elsewhere.  It fails to achieve the wonder of The Polar Express or the intense and passionate myth-making of Beowulf.  The screenplay, written by Steven Moffat, Edgar Wright and Joe Cornish, contains hardly any clever dialogue or little else other than exposition. Come what may, I'll take 'dead eyes' any day over 'dead script'.

With no characters worth caring about, little true action until the finale, and absolutely nothing relevant to say, The Adventures of Tintin is a genuine disappointment from a pair of normally spectacular filmmakers.  Had the film had more of any of the above 'qualifications', I could forgive the lack of the other components (IE - I wasn't expecting the potency of Munich, but I was expecting more engaging characters).  I cannot begrudge Spielberg and Jackson for wanting to play in a new sandbox, in fact it is heartening that they still want to challenge themselves at this stage of their careers, but I only wish their castle was more impressive (comparitively, Peter Jackson's King Kong was a genre homage that splendidly captured the sheer thrill of big-scale movie-making).  At its core, the film is merely full of (gentle) sound and (lighthearted) fury, with little but its technical merits and a few fine action beats to merit recommendation.  It is ironically, just the sort of film that Spielberg and George Lucas are often somewhat unfairly credited with popularizing with the respective successes of Jaws and Star Wars in the late 1970s.

Had Spielberg and Jackson been willing to something more than a hollow genre film, one with characters we cared about and action that had real weight, this could have been the start of a glorious franchise.  And this is a case where a sequel could easily improve on the original.  But as it stands, eventual worldwide box office coup aside, The Adventures of Tintin is the very definition of a missed opportunity.

I congratulate Spielberg for his excellent work on this film. It definitely threw me back to my childhood and I enjoyed it enormously. The conclusion of the film surely hints us that more sequels could be on the horizon.

completely disagree with your review....haddock is a great character!!! i look forward to future tin tin movies! it should have been nominated for the animation oscar.