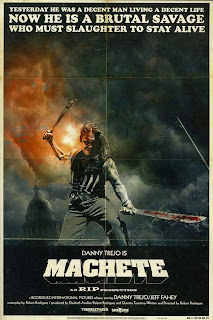 It is easy to dismiss the angry political threads running through Robert Rodriguez's Machete. While it's easy to simply say that 'it's just a comedic throwback to the exploitation films of the 1970s', one must remember that those films did indeed tackle the political and social issues of the day. Whether by coincidence or design, the film ends up being an uncommonly timely glance at one of the major political hot-button topics of the day. Because it is a violent action picture, it resolves its specific issues with confrontation and carnage, and it eventually becomes a form of wish-fulfillment fantasy. But in an age where we constantly complain of empty-headed mainstream entertainment, it is a disservice to both the film and to our own desire for relevant mainstream film-making to ignore the fiery conscience at the heart of this over-the-top piece of Mexican myth-making.

A token amount of plot: 'Machete' (Danny Trejo) was once a dedicated federale, enforcing Mexican law when no one else would. However, he was betrayed by his own people, resulting in the slaughter of his family by drug lord Torrez (Steven Seagal). Three years later, Machete finds himself in Texas and is almost immediately recruited by one Mr. Booth (Jeff Fahey) to assassinate stridently anti-immigration Senator McLaughlin (Robert DeNiro). However, the job is a set-up and Machete soon finds himself on the run. As he sets forth to find out why he was set up and how the plot may tie into his past, he is assisted by Luz (Michelle Rodriguez), a taco stand operator who is secretly the head of an 'underground railroad'-type operation for illegals crossing into America. And his exploits attract the attention of a sympathetic immigration officer (Jessica Alba), and the head of a vigilante border-watch group (Don Johnson), who has explicit ties to the senator.

As you can see, this is a pretty huge cast (I even left off a few), and most of them adapt themselves well to the straight-faced satire. Danny Trejo of course dominates as a man of few words but many creative ways to kill you. De Niro simply plays it straight, never winking at or apologizing for the hateful rhetoric and coming up with one of his better dramatic performances in quite a while. Michelle Rodriguez relishes the chance to play a more fleshed-out variation on her 'tough chick' persona, while Jeff Fahey merely relishes the chance to be in a big-screen feature again. Don Johnson is genuinely unpleasant as a murderous vigilante, and it's obvious that he's well-suited to this brand of grind-house cinema. Cheech Marin has surprisingly little to do as a friendly priest.

Steven Seagal is badly miscast as the lead villain, as he shows without question why he shouldn't end up in The Expendables 2. Yes, it's a bit of self-parody, but Seagal's stilted delivery and laughable Mexican accent detracts from the inherent drama, and Seagal's inability to do all-that-much fighting fatally hinders the final showdown. Jessica Alba gets the most thankless role, as a sympathetic ICE agent and eventual love-interest to our hero. Not even John Hurt could survive the cheesy climactic speech she has to deliver, even if the punchline 'we didn't cross the border, the border crossed us' is a well-known slogan of the immigrant movement and key to the film's philosophy . Most useless and counterproductive is the inclusion of Lindsey Lohan as Fahey's drug-addicted daughter. She has no character arc and barely any dialogue, and her alleged big moments end up being pointless to the overall narrative (yes, you get to see her nude, if that's your pleasure).

Needless to say, the film is relentless violent, with constant shootings, stabbings, and beheadings. Oddly enough, the film is so merciless with its cast that the funniest moments involve four relatively innocent security guards whom Machete goes out of his way not to kill. While most of the carnage is somewhat tongue and cheek, the film does open with a vicious scene of Don Johnson shooting and killing a pregnant Mexican woman for the express purpose of preventing her unborn child from being born on American soil. It's a defining character moment for Johnson and DeNiro (who then says 'Welcome to America' and shoots the grieving husband), but the scene is played so straight that it casts a dark pall over the rest of the film. For what it's worth, the film never gets that grim again, and the picture actually has far fewer innocent bystanders being slaughtered than Once Upon A Time In Mexico. And the scene, if perhaps out of place with the rest of the no harm-no foul violence, certainly sets the stakes and allows the film to perhaps be taken more seriously than it otherwise would (come what may, that moment is going to be discussed at length on various right-wing media outlets).

Needless to say, the film comes out strongly on the 'pro' side of immigration, be it legal or otherwise. We are told several times in one form or another that what is now Texas used to be Mexico, implying that Mexicans crossing into Texas are merely claiming refuge in what used to be their home. For what it's worth, much of the West Coast was taken from Mexico after the Mexican American War of 1848 under the guise of 'manifest destiny'. And the picture comes right and and speaks to the absurd double-standards at play, that the political forces that wish to blame illegal immigrants for society's ills are the same ones that grant temporary work-visas (the most common cause of illegal immigration, as many just stay when the visas expire) and promote immigration in order to keep the cost of labor down.

My take has always been, perhaps simplistically: don't be mad at the illegal immigrant taking your job, be mad at the rich white guy who took your job and gave it to the illegal alien. Of course, the idea that all of the bad guys (the evil businessman, the corrupt senator, the murderous vigilante, and the Mexican drug lord) are all working together is a populist fantasy, but one that will appeal to both sides of the proverbial political border. And the big action climax, where several major characters switch sides, is more about cathartic appeal than offering a realistic solution to the current problems. And Rodriguez does craft a doozy of a finale, with a mass battle where there are just enough major characters in the field to avoid the whole 'random extra attacking another random extra' problem that plagues many mass battle scenes.

As with all films with a strident political dogma, it is up to each viewer to embrace or ignore the philosophy on display, to decide whether they can or should divorce themselves from the narrative and simply enjoy the film on its artistic merits. Aside from the politics, the film works well as a violent action fantasy, that both respects and improves upon the grindhouse-type cinema from which it was fashioned. It is fast-paced, action-packed, and filled with big stars having fun playing in the low-end genre sandbox. It's certainly a kick to see Danny Trejo in a lead role, and it's kinda surreal to realize that this film was actually based on a trailer (yes, every moment from the 2006 trailer is in the film). It's not as good as Once Upon A Time In Mexico (arguably Robert Rodriguez's best film), although it's surprisingly similar in plot. Machete is a rock-solid B movie from a man who seems determined to not rise above the genre staples that he so loves.

Grade: B
Posted by Scott Mendelson at 8:43 PM