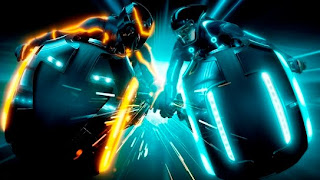 There's a new article out from Anne Thompson, who I usually enjoy, regarding the alleged downturn of 3D. Basically the gist is that 3D is in peril, and the big savior of the format will be Tron: Legacy. The piece itself is harmless, and to be fair it's more of an advertisement for Tron: Legacy than a real discussion about 3D. But it's just another notch in the 'dear god, the 3D sky is falling' bit that forgets the most important part of this whole mess... I'm going to try really hard not to turn this into another endless rant, so bear with me. It's the movie. It's the movie. It's the movie, stupid...

Piranha 3D didn't break out mainly because it was an uber-gruesome R-rated horror film that was advertised as just the sort of thing you can catch for free on the SyFy Channel on Saturday night (which, to be fair, is indeed truth in advertising). Yet, the $24 million piece of soulless garbage has made $63 million worldwide, so the film is still a genuine hit. Cats and Dogs: The Revenge of Kitty Galore was a sequel no one asked for nine years after the fact. It was also so terrible that my three-year old was bored. But it still crossed $100 million+ worldwide. Step Up 3D may not have exploded despite actually being shot in 3D, but the $40 million picture has grossed $137 million worldwide, more than the $114 million global take of Step Up, but less than the $150 million worldwide gross of Step Up 2. And Alpha and Omega may be an out-and-out flop, but did anyone think that the terribly-bland looking Lionsgate cartoon was going to break out? Remember, Lionsgate's far more ambitious Battle For Terra (ironically, a 3D animated version of Avatar six months prior to Avatar) grossed only $3.7 million worldwide. Yes, that's the lowest-grossing 3D movie on record. Regardless, the former $20 million wolf-pack romance has already grossed $16 million worldwide and still has at least a few weeks left.

Let's take a look at what did break out. Despicable Me is just a couple days away from becoming the 10th-biggest animated film in domestic history. Was it because of the 3D? No, it's because Despicable Me (which I finally saw this weekend in a 2D second-run theater) is a wonderfully inventive and clever movie, a joy from start to finish and a genuine crowd-pleaser. It opened to $56 million because Universal did a bang-up job selling the movie, contrasting the subversive story (root for the super villain!) with kid-pleasing comedy (the kids, and the yellow minions). Resident Evil: Afterlife has basically performed like every other entry in the franchise, with more muscular overseas numbers and a token 3D ticket price boost. And The Legend of the Guardians opened with $16 million, which isn't too bad considering the somewhat challenging material (it's an action film about owls, and it looks just scary enough to make parents nervous). Had the film not cost $90 million. And while The Last Airbender was one of the worst films of the year, it opened like gangbusters ($69 million over five days) not because of the 3D conversion but because of the rabid fanbase of the original Avatar: The Last Airbender cartoon and the (now on life-support) bankability of M. Night Shyamalan. And of course, Toy Story 3 was the best film of the year, and it would have been just as effective on an iPhone.

Point being, not one of these movies was a hit or a flop because of being offered (sometimes exclusively) in 3D. As always, it's the movie itself. Harry Potter and the Deathly Hallows part I will open to $100 million+ in November, and it won't have anything to do with its 3D conversion. Tron: Legacy will open based on its marketing campaign, which 90% of the audience will have experienced in 2D theaters and on 2D computer screens. My Soul to Take will live or die based on the marketing campaign that highlights horror pioneer Wes Craven. And Saw VII will get far more of a boost out of opening unopposed on Halloween weekend and/or being the alleged series finale than it will from a 3D conversion (I would hope that the fact that Saw VI was the best of the series would help too).
Until we see a film that would have flopped in 2D but became a mega-smash due to being in 3D, the 3D format remains a tool, a way to enhance the viewing experience and/or spend $5 million in order to charge $5 extra per ticket. There is no such genre as 'the 3D film'. What filmmakers over the next year or so have to decide is whether they want to be a 3D film, or a film that happens to be in 3D.