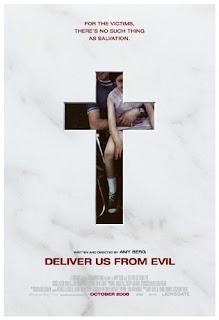 Back in my high school days, I fell into reading the non-fiction works of John Douglas and Robert Ressler. Both were pioneering profilers for the FBI back in the 70s and 80s and both had extensive careers tracking and analyzing serial killers, rapists, spree killers, and the like. Although Ressler was the elder statesman of the two (he actually coined the term 'serial killer'), Douglas's work was always far more entertaining. The difference was that of tone. While Ressler often went into rants about how evil, depraved and horrible his subjects were, and how despicable their crimes were, Douglas had none of that. Douglas trusted the readers to realize the levels of sadism often on display and felt no need to point out the obvious.

Deliver Us From Evil is a documentary that, for most of its running time, dares to be clinical and almost objective. There is no narration and while the interviews are obviously edited together, there is a feeling of free-flowing conversation throughout. The subject matter is obviously inflammatory, but director Amy Berg does not sensationalize the events in question, but rather allows victims and victimizers alike to explain their actions in cold, meticulous detail.

The story in question concerns one Father Oliver O'Grady. From 1976 until 1993, he was sent to several different parishes in California, where he would befriend local families and use that trust to rape or molest the children in the household. Some were girls and some were boys, but a true victim count has never been tallied. Throughout this time, he was aided and abetted by the Catholic Church in general, and specifically Cardinal Roger Mahoney, who desperately wanted to become Arch-Bishop. Under Mahoney, more than 550 priests abused children without consequence. This movie centers merely on O'Grady, allegedly the most prolific of the offenders, and several of his victims.

If you followed the headlines in the summer of 2002, the general outline of this is not news. The concept of pedophile priests is not a new one, but the explosive allegations of that summer merely cemented what many always believed: that high ranking church officials (including the current Pope) protected the offending priests from criminal and civil punishment and also sent them from one parish to another.

While the film provides few factual revelations, it is a sobering and powerful character study of victims and their families, as well as the victimizer and his accomplices. Colorfully morbid details are tossed about and the various philosophies of the church are discussed in relation to the scandals that are present. Theories on why there are so many pedophiles in the church are offered and various stereotypes are tackled (there are just as many female victims as male, and most pedophiles are heterosexual in nature). Various histories of church dogma are also discussed in relation to the crimes in question. The film falters in its last act, as it shifts from a personal study to a grand overview of the pedophile priest issue; with the victims traveling to the Vatican to deliver a letter to the Pope. The film is at its best when it acknowledges the mass problem but centers on the few victims that are interviewed. But, at its core, the film is simply a study of a relatively objective serial rapist and the victims he left behind.

Deliver Us From Evil is not sensationalistic and refuses to attempt to shock the audience. So clinical and low-key are its descriptions of child sex crimes, that there is genuine shock when tempers do flare and profanities are actually uttered (subject matter aside, the film is a few 'f-words' away from a PG in terms of actual onscreen content). It is a dark and sobering look at a mass tragedy and shameful legacy, seen through the eyes of a few brave souls who felt it was worth talking about, as well as the main figure in the sorrow. As for why he was so willing to open up, one can only guess. Perhaps he merely wanted to have his say, no matter how damning it is. For now, it is a time capsule for when he leaves this world and, possibly, receives his punishment.

Grade: A-
Posted by Scott Mendelson at 1:05 PM No comments: Links to this post