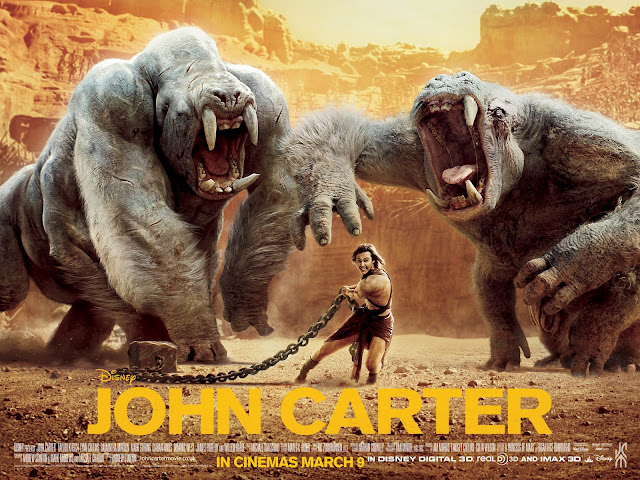 I understood Brian DePalma's Mission: Impossible the first time I saw it in theaters.  I had no trouble following Chris Nolan's brain-twister thrillers (Memento, The Prestige, Inception).  It was work, but I more-or-less 'got' the core narrative beats of LA Confidential and Tinker, Tailor, Soldier, Spy.  But by golly John Carter is a confusing muddle of a movie.  There has been all kinds of hand-wringing about the film's rather large budget and its lousy marketing campaign.  I've taken the film to task for representing Disney's obsessive desire to ditch their core female audience while spending untold millions on boy-friendly franchises that don't pay off (HERE).  But putting all of that aside, Andrew Stanton's visually ambitious and cheerfully innocent boys' adventure film does indeed have a few moments of visual splendor and gee-whiz action.  But it is saddled by a needlessly convoluted narrative that goes nowhere slowly, and that further strains patience by telling its story through cryptic exposition as well as inexplicable casting and costuming choices that renders a large chunk of the supporting cast indistinguishable from each other at key junctures.

The plot, such as it is, concerns John Carter (Taylor Kitsch), a bereaved Confederate soldier who ends up transported to Mars through sci-fi happenstance and ends up embroiled in a civil war.  That's the gist of the story, but the film spends nearly an entire act getting him to Mars and much of the film establishing and then explaining the various complications that I'm sure were in the original novel but feel like needless padding in the cinematic adaptation.  It may not be fair to compare John Carter with other recent fantasy franchises, especially as the Edgar Rice Burroughs 1912 novel is seen as a major influence on the last 100 years of genre storytelling, but Stanton and his team make a key mistake in the construction of this film.  In short, instead of giving us complex and/or nuanced characters in a relatively simple (but engaging) story, they give us simple and visually confusing characters in a needlessly overwrought and distracted narrative that spends most of its time merely establishing the 'scientific proof' of what we saw before our eyes in the opening reel. Yes, John Carter is from Earth and yes some weird otherworldly force (represented by the always villainous Mark Strong) has given one side of the conflict access to superior weaponry.

The film lacks urgency until its last couple reels, as the main character lacks any real purpose.  There is no 'we've gotta get that ring to the mountain' or 'we've gotta rescue the princess and get the robots back to the good guys' headquarters'.  We are quickly made aware of what peril awaits Princess Dejah Thoris (Lynn Collins, giving the best performance with the most fully-drawn character in the film), but no one seems to be in any real hurry to prevent her non-consensual marriage to the duplicitous Sab Than (Dominic West), which will prevent Than from massacring her people with his new-found weapons from Apocalypse err... I mean from wherever the heck Mark Strong happens to reside.  The film spends most of its middle 90 minutes with John Carter and Dejah Thoris literary wandering through a desert with no real point to the destination.  We meet certain fantastical creatures (12-foot tall barbarian martians led by Willem Dafoe) and we witness the occasional worthwhile action sequence (there is a great second-act action scene that cross-cuts a hack-and-slash battle with flashbacks to Carter's tortured past), but the film is generally unsure of where to go or why to go there.

Not helping matters is the inexplicable choice to cast a number of major characters with actors who look awfully similar to each other.  The most glaring example is the casting of Dominec West as the chief antagonist (although he gets a second act moment that implies a change of sides before forgetting about that in the next scene) and James Purefoy as a loyal lieutenant in Thoris's army (I'm not even going to get into the names of the several tribes, as that will only confuse you more).  Point being, when decked out in similar-looking royal garb, these two handsome dark-haired Caucasian actors look exactly alike, which is made even more confusing when you toss in a secondary villain (Strong) who has the ability to shape-shift.  The two opposing armies also look pretty much the same, with only the colors of their capes to distinguish them (blue = good, red = bad... I think).  This not only causes confusion during major dramatic beats, but also during the film's several brief battle scenes.

During the prologue (itself muddied by inexplicable exposition), you won't be able to enjoy the impressive (if brief and choppily-edited) aerial pyrotechnics aboard the two dueling mid-air battleships because you won't have a clue who is killing who.  During the final battle (which is also inexplicably brief, considering the set-up and lack of big-scale action up to that point), you will also be visually confused by the blur of red and blue-caped soldiers hacking at each other in obtuse, PG-13-friendly angles.

Only the first act climax resonates among the battle scenes, as its focus is purely on John Carter 'saving' the princess, so our confusion about which ship we should be rooting for is a moot point.  As mentioned, the second-act climax is a fine bit of dramatically-compelling action, and the much-hyped gladiator combat against two large apes is pretty solid, even if it pales in comparison to the many films that have ripped it off over the years (and comes so late in the game that it feels like a distraction).  There is nothing anywhere near as rousing and crowd-pleasing as the various battles found in the Lord of the Rings trilogy, the Star Wars saga, or the last act of Avatar.  This is the only area where the film's high cost vexes, as those hoping for large-scale thrills will leave quite disappointed.

Now that I've been bagging on the film for a few paragraphs, let me point out what does work in the film.  The scope is indeed impressive, as the Arizona desert makes a suitable substitute for the red planet and the special effects are generally top-notch through-and-through.  The Michael Giacchino may be channeling early-80s John Williams, but it is effective and appropriate for the genre template.  Ironically, the three best things about the film are its three lead humans.  Taylor Kitsch may not quite sell his almost cartoonishly deep voice, but he is an incredibly expressive actor who manages to wear his He-Man garb without embarrassing himself in the process. He is convincing in action and exhibits a pleasant Harrison Ford/Jackie Chan vibe of annoyance and fear when the situation calls for it.  Ciarán Hinds lends appropriate gravitas as the king of a threatened land, and his relationship with his unwillingly betrothed daughter gives the film what little emotional pull it contains.

A slight digression, but Strong offers his usual deadpan menace, but his 'stand back and observe' technique leaves the film without a memorable villain.  West is technically 'the bad guy', but the film is crying out for a more colorful adversary, or at least a more colorful actor in the role.  Finally, shock of shocks, Lynn Collins offers one of the better 'female lead/love interest performances that we've seen in this type of fantasy adventure story.  The key is that Princess Dejah Thoris actually has quite a bit of screen time before she even meets John Carter.  She is fully developed, with a plot and emotional arc of her own, before she finds herself in the company of the strapping warrior.  The film only makes her into a 'damsel in distress' when she puts herself in peril for the sake of others, a key difference in terms of the film's surprisingly progressive gender politics.  I wish the film had more than one major female character, aside form an extended cameo from Dafoe's martian daughter (Samantha Morton), but oh well.

Come what may, Andrew Stanton's John Carter is neither the next step in grand-scale franchise film-making nor an unmitigated disaster.  I appreciated the sheer weirdness of the Earth-bound prologue, while in turn wanting the film to 'just get on with it'.  The picture has a surprisingly likable lead, with Kitsch falling on the fantasy hero scale just above Jake Gyllenhaal in Prince of Persia: The Sands of Time, well above Garrett Hedlund in Tron: Legacy, but well below the high water marks of Brendan Fraser and Orlando Bloom in their respective adventure franchises.  Lynn Collins makes an uncommonly memorable female lead for this genre, as her princess is strong, independent, and intelligent without being obnoxiously (and patronizingly) 'feisty'.  There are a few scenes of solid action, and a second act trip into a cave of lights impresses the eyes.  The 3D does little other than darken and blur the image, even on an IMAX screen, so 2D is the way to go if you have a choice.  The film is simply not good enough to kick-start a new franchise, but the things that bring it down have little to do with its cost.  The film is simply too pointlessly muddled to the point of confusion, and the film makes several visual choices that render the film visually confused as well.

In the end, confused is the word that best sums up the picture.  Narratively confused, visually confused, and confusingly lacking in stand up-and-applaud action moments and iconic characters that merit us cheering or booing at the right spots.  John Carter the novel may have been the first modern fantasy adventure story.  But in terms of cinematic fantasy, any number (Star Wars, Lord of the Rings, The Matrix, Avatar, etc) have done it better.

Pretty good review. I didn't love the film, and agree with a lot of this, but I didn't find it confusing or hard to follow. Rather it was just hard to care about either the RED or the BLUE team!

Personally , I really enjoyed this film, and yes it might not be on scale with SW, LotR The Matrix, it was for me no worse than avatar. and confusing, guess its depends on what type of films you watch, for me I had no confusion, felt that they did an excellent job.

I would grade it an A.